There Must be Something in the Water? 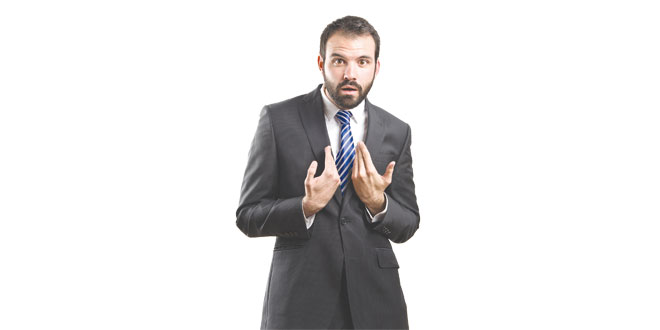 Upon entering certain establishments, such as dentists or doctors offices, I can understand why some folks may be irked, irritated, or just P’d Off. It probably has to do with the uncertainty of one’s health (they always find something wrong), and the biggest factor is the unpredictable amount of money you will have to shell out-of-pocket, whether you have healthcare or not.

I can relate firsthand with my $2,500.00 toothache ordeal I had to deal with this past summer. I went through a blizzard of expensive x-rays, got not-diagnosed, which resulted in going to “specialists” in Naples, culminating in a wonderful and enjoyable root canal procedure. And don’t forget the cornucopia of prescriptions, antibiotics and painkillers. And, after all the theatrics…

My tooth still bothers me today! Am I angry? You have no idea.

Add to the fact that my house turned ten-years-old this summer and became a money pit. I practically had to replace every household appliance, from the microwave to the garbage disposal, then from the pool pump, home and business A/C, and even my garage door opener. Every other day something else would break or give out, not to mention problems with my car, and a boat I never seem to use. For two long months it never seemed to end. You bet I was frustrated. In fact, fit to be tied was more like it. I laughed about one broken thing after another, and wrote checks like I had won the lottery. The one thing I didn’t do was take it out on the ones who repaired or replaced the problems. Bottom line, it was a frustrating and expensive summer. I am now surrounded with every good luck talisman I can think of.

So what makes a person enter a jewelry store with a really bad attitude over a dead watch battery or a broken piece of jewelry? You have no idea! Let me tell you about true absurdity. Last week, a certain person in a premeditated act, blindsided me after handing me a thirty-year-old watch that I presumed needed a new battery. When I tested the old battery it was fully charged (a fact this person already knew). The watch had other mechanical issues, so I recommended the services of a good watchmaker, and even provided his business card. That person then got madder than a hornet in a mason jar, and accused me of breaking the thirty-year-old watch because I changed the battery eight years ago (and had the receipt to prove it). So, correct me if I’m wrong, eight years ago I changed a battery, I charged a fee and the customer walked out with a watch that told time. Now understand this, no watch battery on this planet lasts eight years, which means it had to replaced elsewhere numerous times, and being an old, outdated and obsolete electric watch, it also requires periodic maintenance, which this frugal person never did. Did this person stew over this for eight years? You bet! There was no explaining the reality of the situation, sometimes watches stop running and need repair, the reason the Supreme Being created watchmakers!

Of course! What was I thinking? I forgot I must have inserted an eight-year time-delayed device that ruined the watch, and that was all there was to it. I listened to the insanity and kept my cool, kinda sort of. Let’s just say I don’t expect this person being a return customer anytime soon. A really slow summer = really slow people?

What prevented my day from being completely soured by that experience was the nice compliment I received from another customer who picked up a piece of jewelry I created especially for her, a half-hour later.

And some folks wonder why I can be grumpy? Last time I checked, this island was supposed to be a true “paradise,” so why are so many people walking around here miserable? While talking to many of my friends who work on the island, and many are in the business of serving the public, they all told me the same thing – the majority of customers had short fuse syndromes last season, and many folks were downright rude! Guess I wasn’t alone being subjected to the abuse, and especially the disrespect. I can only imagine what my friends who serve in the restaurant biz had to endure. I saw a guy’s head explode at a local convenience store because they were out of the Sunday New York Times! I also witnessed an even worse catastrophe, the running out of jelly donuts at double D’s! It might be time to increase your Prozac dosage, dudes!

I find all this really sad because all it does is breed discontent and unhappiness throughout the whole island. I understand things are tough all over, and contrary to public belief, I’m convinced the economy could still use some improving. These are good reasons to be frustrated and angry, but don’t take it out on the folks who have to put up with these rogues on a daily basis – it’s not their fault! They are just trying to get through the day or take care of business. It requires less effort to be kind than to be mean, and all it takes is one hurtful comment or action to ruin a working person’s day.

Another great example is the parking lot in front of my shop. Some days it looks like a chaotic bumping car concession at Coney Island; folks get in the car, not so much as a glance in the rearview mirror, pop it in reverse, step on the gas, and smash! Now the scene becomes a scream fest. Rarely a day goes by without the sound of cars colliding. It’s simple: Try a little common sense and some courtesy, it won’t kill you!

On several occasions last season I had to interrupt and reprimand “socially ugly” people who I overheard abusing and disrespecting my mother. For Pete’s sake, abusing my sweet eighty-year-old mother in front of me!

I have a certain advantage; I’m the boss and answer to no one (except, of course, my friends at the I.R.S.). “Unreasonably rude” people get escorted out the door. If this new, unwanted trend continues I may be the only jewelry store on the island with a 250 lb. door bouncer, and only a handful of customers.

I’ll now remove myself from the pulpit, but not before I will vow to make every effort to heal the mean ones with kindness, and even do some personal soul-searching. So, if these rantings convert even one single grumpy person, then its mission accomplished! I promise this will be my last article about people who have nothing to do but rain on my parade. But, if all my efforts fail, I may have to return the signage to the wall of my establishment, which states:

“If you are grouchy, grumpy or downright mean there will be an automatic $20.00 surcharge for just putting up with you!”

And now, on a happier note, an intelligent question from my website, www.harborgoldsmith.com.

James asks: My Rolex watch is constantly losing time on a weekly basis, it is only a few years old and has been in for servicing several times to fix the problem, only to be told the watch is mechanically fine. Meanwhile, the hands of time don’t lie! What’s going on?

James, you are not alone with the watch being inaccurate. Ask any professional watchmaker and they will tell you that it’s normal (?) that certain makes of even expensive watches have a tolerance of a few minutes, fast or slow. It’s my opinion a $30.00 Timex is more accurate. Most current day Rolexes are not battery powered, and possesses an automatic winding movement, when worn daily, the wrist movement winds the watch. Now forgive me for what I am about to say, and this is just my theory.

If the wearer of the watch is a bit of a couch potato or an inactive person, the watch won’t get fully wound, and I’m thinking this can cause it to lose time. Plus, the fact if you remove it nightly or on weekends the same thing will happen. There is this cool invention called a watch winder. When you are not wearing the watch, like for example while you sleep, you place it on the winder and it revolves right and left every now and then and keeps it wound up.

The winders come in many price ranges, from $50.00 to $300.00. The best winders are expensive, as was your Rolex, because they run quietly and smoothly. The cheap ones make a lot of noise, and you won’t be able to sleep in the same room with it. I can’t guarantee it will solve the problem, every watch has its idiosyncrasies, but it could do the trick.

A new season will soon emerge, please be kind to your local goldsmith.