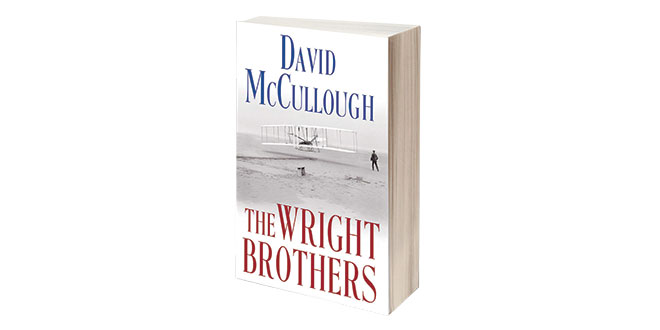 All American kids learn about the Wright Brothers’ first flight at Kitty Hawk in very early grade school. We think we know them and their importance to aviation. Turns out we know nothing.

David McCullough brings Wilbur and Orville to life in his inimitable style, fleshing out the rather stern looking men in the old black-and-white photographs. This biography gripped me within the first few pages as firmly as the last political thriller I read. It was hard to put it down.

The boys apparently inherited their mechanical prowess from their mother, Susan Koerner Wright, the daughter of a German wagon maker, who constantly encouraged her sons’ curiosity and saved everything the boys tried to make, putting each “invention” on a shelf in the kitchen. She realized they had something special. Apparently so did she, as she was said to able to make old toys or odd scraps into better than new. She was also her husband’s intellectual equal and their household included one library of theology books and another comprised of novels and books on every conceivable subject. Susan tragically succumbed to tuberculosis in 1889 on the Fourth of July. The Wrights never again celebrated that holiday.

Their father Milton Wright was a minister in the United Brethren Church in Christ, achieved the position of bishop. He joined this church as a young man largely because of its stances against slavery, alcohol and freemasonry/secret societies. In the early 1880s, a liberal movement within the church was eating away at some of these policies, especially the policy against joining secret societies. Bishop Wright had been an itinerant minister his entire career, but sensed that this dissension within the church was coming to a head and he wanted to be in the middle of it. Hence, he decided to move the family to Dayton, Ohio. At that point, they had lived in 12 different places.

In Dayton, Orville was born in 1871 and three years later, Katharine came along, giving Orville a baby sister on his third birthday. (The two would share not just a birthday but a very close bond that would remain unbroken, although severely strained later in their lives.) The Wright family was now complete, with three older sons, Reuchlin, Lorin and Wilbur, all born in Indiana. No middle names in this family – the bishop gave his children distinctive first names.

When I first read a blurb about this book mentioning that the Wright brothers’ father was a minister and they grew up in a house with no indoor plumbing or other conveniences, I thought this was going to be another dysfunctional family where the genius kids somehow make good. Instead, the Wright children lucked out, won the parent lottery. Susan and Milton loved their children, saw them as individuals, and encouraged them to develop their own personalities and intellects. Although Milton was an ordained minister, he encouraged his children to read Robert Ingersoll, an avowed agnostic, to examine their own convictions and come to their own conclusions. After doing so, Orville and Wilbur announced they would not be going to church anymore. Bishop Wright accepted this without one syllable of reproach. He and Katharine continued to attend church on Sunday. The Bishop was also not strict about school attendance. If the children were deeply involved in a book or a project of their own, they were allowed to complete that instead of reporting to the classroom. With that sort of familial environment supporting intellectual curiosity, problem solving, and self-reliance, it makes sense that the boys turned out to be giants in their chosen field of aviation.

Katharine was no slouch, either. She was the only one in the family to get a college degree, after which she returned to Dayton to teach Latin at Steele High School. She was a great assistance to her brothers and her father in many ways and they all supported her pursuit of a college education. In later years, Orville would brag that Katharine had flunked many of the boys who would later become Dayton’s leaders. It was Katharine who kept the home fires burning and supervised the operation of the bicycle shop when the boys started their experiments with gliders at Kitty Hawk. She was communication central when the boys were in one location and Bishop Milton in another.

Although Bishop Wright loved all his children, Wilbur was his clear favorite. He admired his son’s intellect, precision, focus, and sterling character. Everyone in town including his teachers, felt sure Wilbur would be off to Yale after high school graduation. However, there was a horrible accident that altered Wilbur’s life in his senior year. While playing a pick-up game of hockey, he was hit in the face with a hockey stick, causing facial injuries and knocking his upper front teeth. Wilbur suffered excruciating pain for weeks, had to get false teeth and continue to have pain and digestive problems. He stayed for three years, during which time he helped nurse his dying mother and read voraciously.

Orville meanwhile, still in high school, built himself a printing press in the shed in back of the house and printed a neighborhood newspaper. It included poems written by his friend and classmate, Paul Laurence Dunbar, who was to become a substantial influence in African-American literature before dying very young at 33 of alcoholism and tuberculosis.

Around 1890, bicycles were very popular. Physicians wrote articles about the benefits of biking. Though there were those with moral objections, naysayers who saw the devil in those contraptions. Instead of children staying close to home, they could be miles away in a matter of minutes, not paying attention to their books and seductions were transpiring on those bicycle trips to secluded areas, you betcha. Nevertheless, the rage for bicycles continued to grow. The boys opened their bicycle shop on West Third Street in Dayton in 1893 and enjoyed huge success at first. But as more bicycle shops opened in Dayton, business slacked and Wilbur thought about pursuing another career. Eventually, the boys decided to move to another shop which was bigger and starting making their own model of bicycle, available to order.

When Orville contracted typhoid in summer 1896, Wilbur began reading about gliding, inspired by the recent death of German engineer Otto Lilienthal, who expired from a fractured spine after a glider accident. His younger brother often joined him in his gliding experiments. Perhaps this piqued the boys’ interest. Wilbur began reading Lilienthal’s writings aloud to Orville as he recuperated. His past intense interest in birds was rekindled by Lilienthal’s analysis of birds and his effort to duplicate their flying ability.

Orville recuperated. Business remained good. Wilbur continued to learn as much as possible about flight. On May 30, 1899, Wilbur wrote to the Smithsonian Institute and asked for information on publications and articles on the subject of flight, reassuring them that he was not a “crank.” With the list of books and SI pamphlets provided to them, the boys began to study in earnest and that summer began to build a glider in a room above the bicycle shop. By August, they were testing it in an open field. Happy with the results, they were decided to build a man-carrying glider. By the following May, the boys were looking for a place to test their manned machine. It had to a place with no rain or inclement weather and winds of about 15 mph. Wilbur wrote to Octave Chanute for advice, who suggested sand hills such as those in South Carolina or Georgia might be a good location. Wilbur had also written to the National Weather Service for information about prevailing winds. After studying that data, the boys decided Kitty Hawk, North Carolina would be the testing site for their manned glider. Thus began a new era in history.

This book is a must-read for history buffs and a delight for anyone who loves an intriguing story. It is full of the Wright brothers’ encounters with other inventors of that time as well as the politics of getting funding for research. Most striking to me was the Wrights’ self-confidence and quiet persistence in overcoming obstacles to satisfying their intellectual curiosity. At that time, most people simply felt man could not fly and should not try. The people of Kitty Hawk initially thought they were crazy, but so did almost everyone else in the country.

David McCullough has given us another masterpiece. Using primary sources including thousands of letters written by the Wright family members to each other and others, diary entries, newspaper and journal articles, he has written a concise history of the men who solved the problem of flight. A mesmerizing tale, to be sure. Included in the book are many photos, as Wilbur had the foresight to bring a camera to Kitty Hawk and subsequently to every flight thereafter.

My rating is 4.75/5.0. This would make a great gift for just about anyone for any occasion.