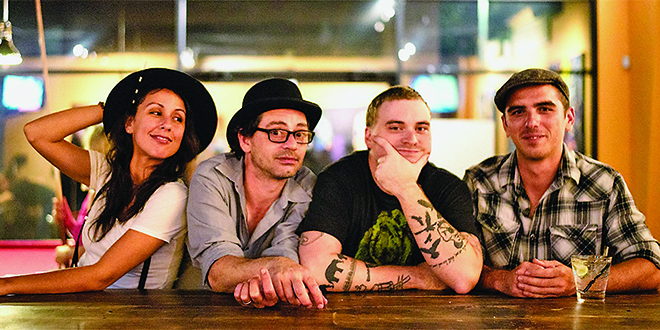 Photo by Stills By Hernan | From left: Christina Ortega, Julio Pintos, Mayo Coates, and Taylor Freydberg of The Woodwork.

In an area like Southwest Florida where Jimmy Buffett “island style” music reigns supreme, it can be difficult for an indie band to stand out. It seems, however, that a group of four young Naples residents have done just that. It’s as if they came out of the woodwork (aptly naming their band “The Woodwork”) with their surprising musical prowess and artistry.

The Woodwork was formed in March of 2016. They perform at The Oyster Society, a Marco Island restaurant with a 1920s flare, on Wednesday and Sunday nights.

The group is comprised of guitarist and vocalist Taylor Freydberg, upright bassist Julio Pintos, percussionist Mayo Coates, and Marco Island native and singer Christina Ortega. Christina spent her childhood years on the island before moving to Naples. Now she’s back as an artist, sharing her music with the town she grew up in.

“When I first moved here [Marco Island] there wasn’t even a Publix,” said Christina Ortega. “So to see it liven up a bit and to be able to be a small part of that is a really good feeling.”

The band’s formation was somewhat serendipitous—the right group of like-minded people finding each other at just the right moment. It all started with Taylor Freydberg asking Christina Ortega to perform with him. After their performance they quickly realized they wanted to continue playing music together and soon things were falling into place.

“Julio was playing in a Latin band at the time and was expressing how he wanted to make original music and we all just started practicing together,” said Christina Ortega. “Mayo was resistant at first because he has a full time job and is in school, but when we started writing original music he was hooked.”

The Woodwork’s style can be described as a unique blend of folk and jazz music, interspersed with hints of Latin jazz, fingerstyle guitar, and harmonic melodies. They draw their inspiration from the likes of Billie Holiday, Beethoven, Tom Waits, and Elvin Jones. Their 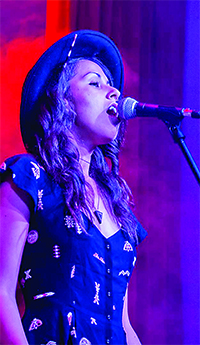 style is a smorgasbord of genres, all blended together to create a distinctive sound that almost defies categorization.

“I’d say that our style doesn’t really fit neatly into any one category,” said Mayo Coates. “We take bits and pieces from the music we love and try to fit them together to create a reflection on what we enjoy when we listen to music. Folk and jazz heavily influence our sound and there’s definitely a little Latin mixed in, but we pull influences from other styles as well.”

Watching The Woodwork perform is captivating. Their talent demands attention—their performances are electric and their chemistry is palpable. It’s not often you come across a band as engaging and apt. It’s as if they have some sort of telepathy, communicating through quick glances to one another as they perform. It’s really a delight to watch them work together so cohesively and joyfully. It’s no surprise that despite being just one-year-old, they’ve found quick success.

“It’s been inspiring to see our goals manifest,” said Taylor Freydberg. “Having such a high volume of shows this early on has reinforced our belief that we’re creating something interesting and unique.”

Currently, The Woodwork has a five-song EP titled “Burning Bridges.” According to Christina, the band has been writing new material that they hope to release sometime this year.

At a typical show, the group will play original music from “Burning Bridges” as well as cover some big name musicians. They even take on late powerhouse vocalist Amy Winehouse performing their version of her famous “Back to Black.”

The Woodwork performs at The Oyster Society on Marco Island every Wednesday and Sunday night. You can also catch them in Naples. For a full schedule check them out at www.thewoodworkmusic.com.

“It’s been a really amazing opportunity to be able to play in front of so many different people from all over the world and in such a refined establishment,” said Taylor Freydberg. “They [The Oyster Society] really set a mood and we are so happy to be able to contribute our sound to their atmosphere.”