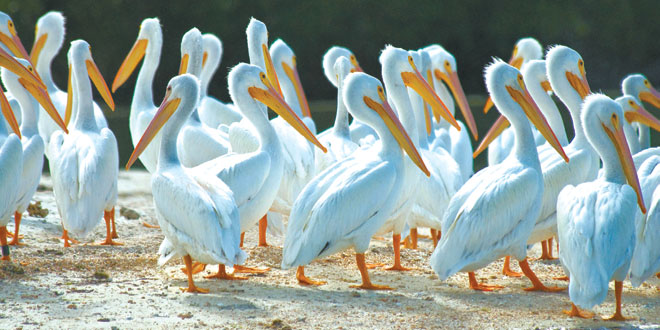 One the largest and oldest known birds in our nation, named by a German naturalist in 1789, is the White Pelican, Pelecanus erythrorhynchos. It migrates from the north to winter in south Florida, particularly Sarasota to south of Marco Island, giving the moniker, “snow bird,” real meaning. Once hunted as sport, the White Pelican is protected under the Federal Migratory Bird Act of 1918 and is listed as a species of special concern in the State of Florida and several other states.

This species of pelican, one of the two in the United States (the other is the smaller Brown Pelican, a year round resident of the Gulf of Mexico) breeds and lives in the northwest from Manitoba, Canada through Minnesota to northern California. Then, as the weather gets colder, migrates to the southern, coastal lowlands from Mexico to Florida, to feed and rest, much to our enjoyment.

With a heavy looking, all white body, a very large, creamsicle-orange bill with a “horn” during the breeding season, a body length of about five feet, a wing span of nine feet and weighing on average 17 pounds, the White Pelican 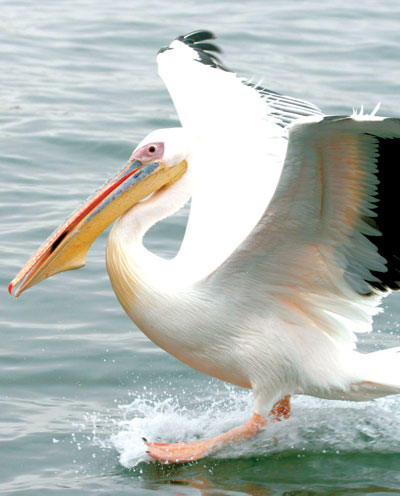 is the most striking and largest bird one can see. Between December and March each year, the bird resides along the Gulf of Mexico coast of South Florida.

On Marco Island, rarely, a few may be seen in the Tigertail Lagoon or Sand Dollar Island. Last winter about a dozen were feeding and resting in the north area of the lagoon, near Hideaway Beach for just a couple weeks. More commonly, a large flock is seen in Morgan Bay, behind Kice Island, resting and sunning on a sand bar and mud flat that is exposed in the low tides. Another flock can be seen in the quiet, secluded Barfield Bay. These “snow birds” are timid and shy, seeking calm, shallow back waters, not open water. It is always startling and thrilling, when boating in the back waters, to come around a bend or mangrove island and suddenly see a flock of White Pelicans. They are shy birds and easily agitated and flushed by onlookers getting too close, so one should keep a respectful distance.

Differences between the Brown and White Pelican species are obviously size, color, residency, but also fishing styles. Brown Pelicans dive and singularly hunt their fishy meals white Pelicans will hunt in groups, swimming in half 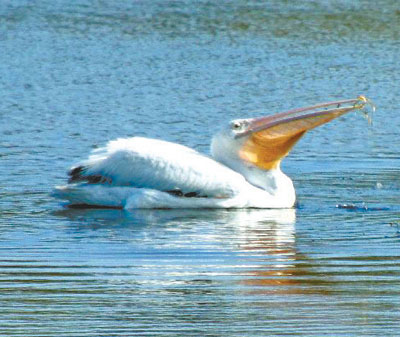 circles, herding schools of fish towards the shoreline shallows or toward each other. Using their large bills, they easily scoop up fish, holding them in their large, expandable neck pouches to drain sea water and position the fish for swallowing whole. They are also known for stealing fish from other birds. So gulls, herons, cormorants and other pelicans beware!

Large but quiet, White Pelicans are not vocal, with a large flock not making much noise other than a grunt or two. They communicate by poking each other with their large bills as warning or alarm signals. For a sign of aggression, the head is kept upright while the large bill is opened and stretched. They are gregarious by nature, breeding and feeding in large groups with individuals shoulder to shoulder most of the time, so perhaps loud noises are not necessary.

As the “snow birds” from the north flock to our Island in the winter months, our streets, stores and restaurants get crowded, but we do have another “snow bird” that graces the natural beauty of Marco Island. While out boating in the back bays, you may have the opportunity to see a majestic flock of these “snow birds” or you make look up and see a great “V” of large flying white birds.