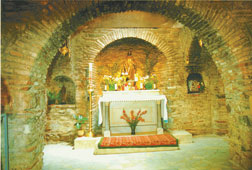 There are a few traditions and places which are holy to both Christians and Muslims. One such place is “The House of the Virgin” in Western Turkey located in a nature park between Ephesus and Seljuk and believed to be the last residence of Virgin Mary (Meryemana or Mother Miriam in Turkish.) This place is considered sacred and is visited by many tourists and pilgrims every year. As a young man growing up in Turkey I had a number of opportunities to visit this location since my mother was a true believer in the miracles of Virgin Mary and tested Her power of miracles on me.

According to predominant Christian belief, Mary was brought to Ephesus by the Apostle John after the Resurrection of Christ and lived her final days there. This is based on the belief that John came to Ephesus combined with the Biblical statement that Jesus consigned her to John’s care (John 19:26-27).

Virgin Mary’s house was “discovered” in 1812 by a German nun, Sister Anne Catherine Emmerich, who never traveled away from her home. Sister Emmerich was an invalid. According to the prevailing stories, she woke up in a trance one day with visions that included the Virgin Mary and Apostle John traveling from Jerusalem to Ephesus. She described a rectangular stone house, which John had built for Mary. It had a fireplace and an apse and a round back wall. She was sure that the room next to the apse was Mary’s bedroom which had a spring running into it. Sister Emmerich went on to say that the Virgin Mary died at the age of 64 and was buried in a cave near this house. When her coffin was opened soon after, however, the coffin and burial shroud were empty. The house was subsequently turned into a chapel. The Chapel was visited by Popes Paul VI and John Paul II, who confirmed its appropriateness as a place of pilgrimage. On November 29, 2006, Pope Benedict XVI celebrated Mass here.

None of the above was on my mind when on 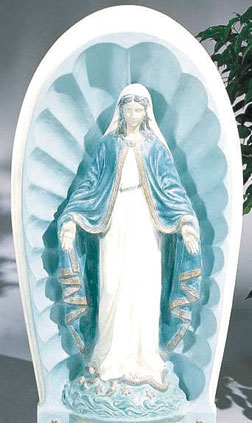 August 15, 1960 (believed to be the anniversary of the death of The Virgin Mary), my mother and I took a long, dusty, hot and uncomfortable bus ride from Istanbul to the western coastal city of Izmir and then on to Seljuk where our destination was located.

The reason for the trip was to pay a visit to the Virgin Mary’s house where my mother was going to have me drink a cup of the holy water from the salty spring which ran into the chapel and wash my face and head with it to instill at least some intelligence into my otherwise scatter-brain. This was the year I would be starting my middle school education at the prestigious British run “English High School for Boys” in Istanbul. After drinking the water and washing my face and head in it we prayed in front of a small statue of the Virgin and promptly returned to Istanbul.

My five years at the English High School for Boys in Istanbul was full of ups and downs academically but my mother’s belief never wavered. When in 1965, I graduated and was accepted to enter Robert College of Istanbul for my final three years of high school education, we were off to the Virgin Mary’s house in August where the ritual was repeated.

Three years later, I graduated from this American institution and was ready for college in America. This time, there was no visit to the Virgin Mary’s house because the family did not want me to leave Turkey. They had planned my future for me and USA was not a part of it. So I left Istanbul on July 4th 1969 and arrived in America without the blessings and miracles of the Holy Virgin.

Upon graduating from University of Maryland and living and working in Cleveland, Ohio, for a couple of years, I had to return to Turkey with my wife and one year old son Jerol to serve in the Turkish Army. One can imagine my surprise and my mother’s delight when I was deployed to a 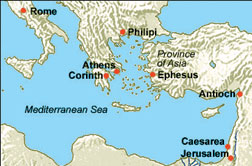 base near Izmir; a short drive away from the House of the Virgin!

After my service, we returned to the US and I started working in New Jersey. When our daughter was born a year later and my sister also moved to New Jersey, my mother wanted nothing more than to come and live near her children and grandchildren. She took a trip to the Virgin Mary’s house and prayed for the Virgin to help her move to America; once again in front of the same statue which we prayed together on two previous occasions. She told us that she asked Virgin Mary to give her a sign that her wishes will come true. To this day, she will tell you that she saw the Virgin Mary statute blink her eyes to her once. That was the sign she was waiting for. The next year she moved in with us and when my father arrived later that same year they went around looking for a house to purchase. They looked around for a long time and finally settled on a house which was near ours and had a nice backyard for my father to plant flowers and work around in his retirement. The backyard had never been cleared and was overgrown with vegetation, ivy and trees with low branches. They called a landscaper to clean the backyard. It was a sunny Saturday when the backyard was cleared completely and revealed a four foot high blue and white Virgin Mary statue on a white pedestal!

Luck? Maybe. But my mother believes differently. She has the statue of the Virgin cleaned and painted each year. That is her way of expressing her thanks to the Holy Lady who held her son’s hand through middle school, high school, college, military service and adult life in the United States as well as blinking her approval for her move to America to be with her children, grand children and now her great grand children.

One response to “THE VIRGIN MARY’S HOUSE, Miracles and more”