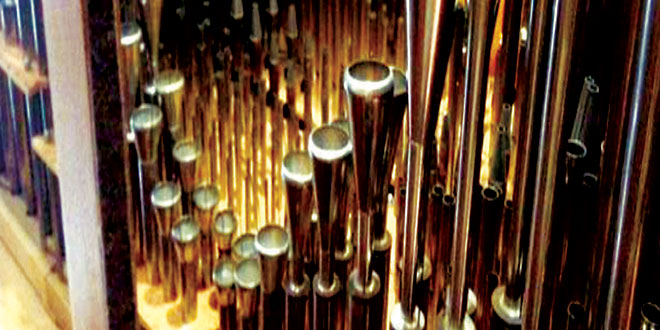 On May 1, 2015, the United Church of Marco Island (UCMI) began what would become a five-month long, total renovation of their building. The church, which is a little over 40 years old, was in dire need of a facelift. There were mold issues, drywall issues and roof and drainage repairs needed. Essentially, everything had to go. New pew bibles and hymnals were purchased, a new sound system was installed and almost everything was repainted and refurbished.

What is perhaps the most interesting and intricate part of the church’s renovation plan was the disassembly and subsequent reassembly of their $800,000, six thousand pound pipe organ so that it could be revoiced. The organ, which was built in 1995, is 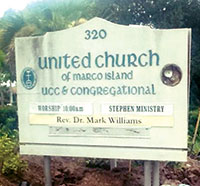 the only pipe organ on the island. It boasts an impressive 1,332 pipes—the longest pipe being over 8 feet and the smallest only 5/8 of an inch long—and took about 8 months to construct and install. Taking it apart was no easy feat. “That was the most amazing thing about the whole process,” said UCMI administrator Jan Kelly. “Seeing them take apart every single pipe. Every single one!”

Revoicing pipes is an essential process. After many years of use, pipes can become dirty and stressed, their sound reflecting their age. Revoicing allows pipes to get back to their original state. Nowadays pipe organs have become somewhat of a rarity as many churches have opted for electric organs, and there are only

a few people in the country who specialize in their maintenance, Hal Gober of Gober Organs being one of them. Hal drove all the way down to Marco Island from Ohio with boxes in his car so that he could send pieces of the organ back to Ohio to be cleaned revoiced. With the help of a handful of volunteer parishioners, Hal spent hours carefully disassembling the pipes and packaging them, a tedious, but important process.

With the snowbirds gone and the church in a state of disarray, UCMI decided to move their services to Disseler Hall, the church’s original sanctuary. “Disseler Hall is where the church started,” said Jan. “We were able to move the services there and for a lot of people it was like going back 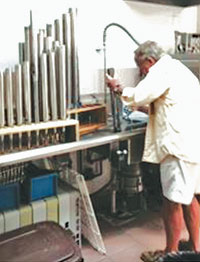 UCMI’s pipe organ was revoiced as part of their recent renovations. And they installed a new sign. SUBMITTED PHOTOS

home. It’s where they started when they first attended the United Church many moons ago.” Though the renovations were many and the work intensive, amid all the construction there was a place of comfort and familiarity for local churchgoers and staff. Members of the church enjoyed using the old sanctuary so much that they’re thinking about using it for future summer services.

Similar to the mythical Phoenix, the renovations seem to have brought forth new life for the church. UCMI was almost completely deconstructed and then built up again, now stronger and more beautiful than ever. The construction has allowed members to revisit parts of their own past as well as the church’s, and in many ways, UCMI has been reborn. On October 4 they will move back into their sanctuary and resume services there.