The Ugly, the Bad and the Good – Not Necessarily in That Order 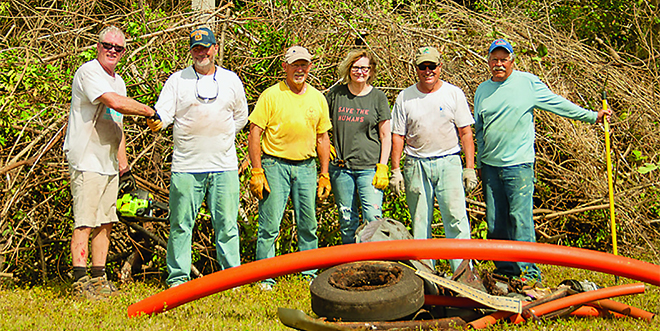 The Good. Here’s what that same section of land looks now after the crew cleans it out. New mangrove growth will now be possible

Let’s start with the Bad. The 30-foot Brazilian Pepper (BP) tree invasion is killing our native mangroves on Isles of Capri by crowding them from the sunlight they need to survive. Native to South America, they were introduced as an ornamental tree, but Avast, me hearties, they’ve changed the landscape and threaten the mangroves that filter the water and provide habitat and nurseries for the fish that grow up here. (You know, the babies that grow up to be sport fish, trophy fish and great dining. Why wouldn’t we want to protect the mangroves?) Hammocks and pinelands have also felt the BP onslaught, but our mangroves are vital to where we live in the Ten Thousand Islands so we may care about our “backyard” a tad more than the other places.

On Saturday, March 25, Luke Larson and a rotating cast of dedicated volunteers arrived early with environmentally approved chainsaws and loppers to assault the jungle. (Stop and check out the Bad before photo.) The crew surveyed the area that needed to be cleared and quickly started working. Note that they are covered head to toe and fingers to prevent the dermatitis caused by anacardiaceae, the family that includes poison ivy, poison oak, poison sumac AND schinus teribinthifolius, the Brazilian pepper tree. If you are allergic, you will rue the day.

There was a plethora of BP in this particular corner of Isles of Capri and the crew was up to the task to eliminate the “rascal” – which might be too lenient a descriptor. They tackled the brush, vines and trees that thwarted the mangrove’s ability to thrive. Great comradery; laughter when someone went ash over teakettle from entanglement in a mostly hidden root, laces that came undone from the entanglement of a mostly hidden root and courageous retaliation toward that same mostly hidden BP root.

Captain Luke steers the ship with enthusiasm and a passion for eradicating the “Peppa.” The rest of us follow like workaholic lemmings and cut, haul and toss the casualties on top of the gigantic pile that will be picked up by Collier County Waste Management. Rookery Bay will spray the leftover tree trunks with herbicide to further dissuade the BP assault.

One of the problems is the berries of the BP. Shiny, red and attractive to birds and other animals, they are eaten and defecated and left to sprout and start the process all over again by sending out roots that spout new trees. Amazingly, the acids in an animal’s digestive system scar the berry seed and hasten its ability to germinate. It seems like many strikes against us, but the Force and dedication are on our side!

Become informed. Note the “volunteer” invasives that may be taking root in your yards. Take steps to curtail their growth before they reach the huge proportions they are capable of reaching. When they reach that 30-foot height, it will take more effort, time and money to get rid of them. Shiny leaves and red berries may look pretty, but they are pretty awful for our environment.

(Now for the Ugly photo – look hard.) What you see here is laziness and excuses. Pipes, a car seat, a truck bumper, tire including the wheel, plastic bottles, old signage, buckets, electrical conduit and much more. Overgrown areas with dense foliage seem to entice some people into using them for their personal garbage dump. There’s no excuse for this; we have trash pick-up and reasonable rates if you have to take your junk to the landfill. It shouldn’t be the adjunct task of the BP eradicators to also pick up garbage. We all should pitch in and do our part.

The best photos are last – Two more photos of the Good; the landscape bereft of the BP jungle and the huge pile of Peppa and the tired but happy crew. Give them a hand, won’t you?

(And oh yes, there will be other similar missions, so stayed tuned for further opportunities.)

Don’t Fall for the Rip-Off, No Matter How Authentic It AppearsWhat in the World is a Feline Facelift?It Takes a Village to Raise a Family’s Grieving Hearts