The Tiny Town That Could – And Did! 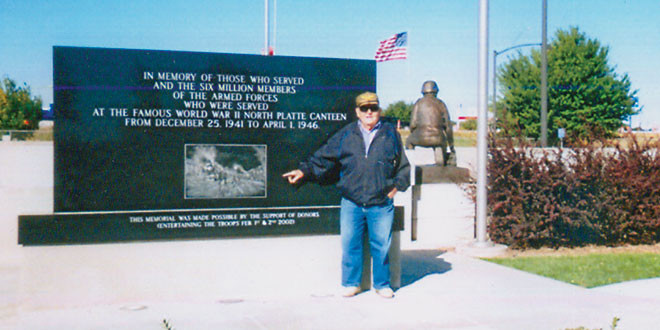 The North Platte Canteen was conceived after a bit of a snafu. On December 17, 1941, friends and families of Company D, Nebraska National Guard, came to the North Platte Depot with Christmas gifts after getting a heads-up that their men were on the next train. The train pulled up, the gift bearers scanned the train car windows for their loved ones’ faces, only to discover that this Company D was from the Kansas National Guard. After a few moments of frozen astonishment, one person stepped forward and distributed her gifts, then the other 500 followed suit.

The young men were so surprised and grateful that Rae Wilson, a local store clerk and sister of the commanding officer of Company D, decided to start a canteen that would meet each troop train when it stopped for service at North Platte. (Union Pacific still used steam engines and the trains made a 10-minute stop for water and relubrication of the engine wheels.) She wrote to the local newspaper, The Daily Bulletin, the very next day:

“I don’t know just how many people went to meet the trains when the troops went thru our city Wednesday, but those who didn’t should have. To see the spirits and the high morale among those soldiers should certainly put some of us on our feet and make us realize we are really at war. We should help keep this soldiers morale at its highest peak. We can do our part. During World War I the army and navy mothers, or should I say the war mothers, had canteens at our own depot. Why can’t we?…I say get back of our sons and other mothers’ sons 100%. Let’s do something and do it in a hurry! We can help this way when we can’t help any other way.”

No one could have foreseen what a monumental project it would turn out to be.

Two weeks after congress declared war, the canteen had its first organizational meeting on December 22, 1941. On December 25, 1941, the North Platte Canteen greeted its first troop train. There were many local canteens throughout the nation and though North Platte was far from alone, they were the most famous of these canteens. Several books have written about the canteen with testimony from soldiers, sailors, and some volunteers. The canteen stop was a vivid memory for many WW II veterans, a bright spot in their time in the service. Most of those troops were 18 and 19 year old men, away from home for the first time in their lives, stuck on those trains for 3 to 6 days, with a stop once a day for 30 minutes of calisthenics. They did not know what was ahead for them on their way to basic training or to deployment.

During the first part of the war, troops were not allowed to get off the train at the service stops because of security concerns. Later the rules were relaxed a bit and some troops were allowed to detrain. The platform girls would pass the basket of gifts through the window for those still on the train and it would be passed down the aisle of the car. One popular item was the marshmallow popcorn ball. Some of the girls would put a slip of paper with their name and address in the popcorn ball so the soldier could write if they wanted. Many became pen pals for the duration of the war and beyond, and there were even a couple of marriages. Those popcorn balls were a 1940s version of online dating! The popcorn ball pen pal gig was not sanctioned by the canteen officials but the girls did it anyway, determined to help with the morale of the troops in any small way possible.

Of course all the hospital trains were greeted by the women boarding the cars and distributing the goodies along with various types of literature – pamphlets, magazines, paperback books, decks of cards, etc. Various church organizations hosted the canteen so there was religious literature available as well.

The travel schedules of the troop trains were top secret, especially in the early period of American involvement in the war. The head officials of the canteen would be given a call by Union Pacific, who then would phone the volunteers on duty that day with “I have the coffee on,” signaling them that a train was on the way. The fact that the president of Union Pacific was a North Platte native helped the group secure a spot in the depot. Originally, the canteen workers had to prepare food items in the Cody Hotel and store the treats in a maintenance shed close to the depot. Rae Wilson then asked Union Pacific President William M. Jeffers for permission to use the depot’s vacant lunchroom as the canteen’s center. He quickly agreed and on January 1, 1942, the volunteers were in their new digs. The railroad also donated a dishwasher and coffee urns.

The volunteers, who numbered about 55,000, were mostly women from the small towns around North Platte, which is in central southwest Nebraska in the Sandhills region as well as Colorado, about 125 different communities in all. All donated their time and food to the troops on the trains. If the towns even tinier than North Platte and did not have enough volunteers 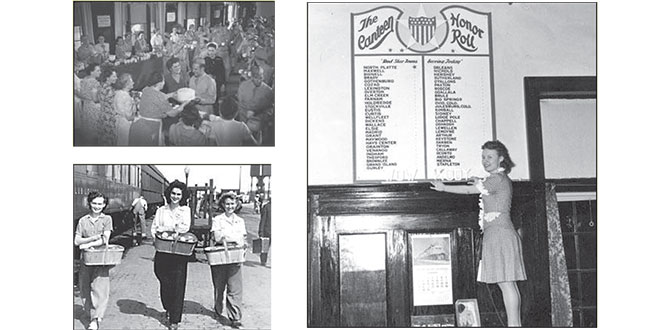 Platform Girls – high school girls who greeted troop trains after school and on weekends, bringing gifts to those who could not detrain during the 10 minute stops. (Left)Hosting Board – the star indicates which town is hosting. (Right)

to staff the canteen, other small towns teamed up with them to make the drive and cover their hosting day. They did this through all weather, fiercely windy spring days, frigid snowy days, on rough roads prior to interstate highways.

There were no corporate sponsors, no federal government involvement. The funding was underwritten by the families of Colorado and Nebraska who used their ration coupons to buy the sugar for the baked goods, sandwich meat, and cigarettes for the troops. Pheasant sandwiches were a common staple, along with the perennial favorite, ham sandwiches. On homemade bread, of course. Churches and local businesses gave what they could. Cigarettes, tobacco (chewing and snuff), gum, decks of cards, were donated by merchants but the bulk of the food at the canteen came from ordinary Americans who did without so “the boys” could have a taste of home.

The volunteers’ duties were assigned based on their skills and resources. One woman was assigned to bake 20 angel food birthday cakes a day because she had access to turkey eggs which would require only six eggs rather than 13 chicken eggs. Every soldier/sailor whose birthday was on the day his/her train stopped at North Platte Canteen was given a birthday cake. Angel food was the most popular and since only egg whites are used in its preparation, the ladies used the egg yolks to make mayonnaise and many sandwiches were served with yellow mayonnaise. The popular slogan at that time was “Use it up, wear it out, make it do.” Of course, these Plains people had practiced that motto all their lives.

No one knows exactly how many tons of food were served to the troops over the 4-1/2 years the canteen operated, but according to the Lincoln County (Nebraska) Historical Museum, the tally for one month in 1945 was: 40,161 cookies; 30,679 hard-boiled eggs; 6,547 doughnuts; 6,939 cup, loaf and birthday cakes; 2,845 pounds of sandwich meat; and 12 dozen different items in similar proportions.

Children gave up their birthday cakes so the sugar could be used for baked goods for the troops. Ladies from outside North Platte would pool their gasoline ration coupons and carpool, their line of vehicles forming caravans, to serve their assigned day at the canteen. The trains came in almost 24 hours a day and every train was greeted. They were at their post from 5 AM to midnight on their hosting day, because they would not know when the trains were coming until they received their “I have the coffee on” phone call.

Other funding came from private donations, newspaper drives, collecting scrap metal, putting on plays or musicals. There is a story that President Roosevelt sent a five-dollar check with a note, “I hear you’re doing good things out there.”

The ladies also assisted the troops in other ways. They would write cards and letters for them, wire flowers and gifts, send telegrams for the troops who did not have time. They would even assist in making phone calls when the operator could not understand what the excited troop was saying. Remember in those days, there was no direct dialing and long distance calls had to be requested from the operator and it might be hours before a line was available for your call.

Officially, the North Platte Canteen closed on April 1, 1946, with a ceremony that included taking down its sign from the train depot building. The next day, a small crew of volunteers was cleaning up the lunchroom which had served as the canteen’s kitchen for four years when another troop train pulled in. They had nothing to offer the troops except the coffee they had put on for themselves, but they got out the cups and had a last cup of joe with the troops.

Today the North Platte Canteen is just a memory. The depot building was torn down in 1971, but it and the canteen are commemorated at the Lincoln County Historical Museum on a plaque constructed from the depot’s original red brick. In the 20th Century Veterans Memorial, there is a beautiful memorial to the Canteen as seen in this photo submitted by local World War II veteran Charles Purple from his visit to North Platte.

During this time of the year, along with the holiday observances and gatherings, our thoughts usually include assessing the past year and our hopes for the year ahead. On this 74th anniversary of the opening of the North Platte Canteen, I am in awe at the immense generosity of the canteen volunteers. Despite just having suffered through a long drought and the Great Depression, upon declaration of war, they immediately turned their attention to building morale for the troops. They gave of themselves, not just their ration coupons, but their time and labor as well. Through five frigid winters, five Christmases and five Easters, the canteen volunteers never failed to have goodies for the troops, served with smiles and a few friendly words. We do not know the personal stories of most of those volunteers, about the personal losses and difficulties they doubtlessly endured during those years, but we know they met every train and fed everyone on it, six million of them. The volunteers at North Platte Canteen lived the Christmas spirit for 1,560 days in a row. America could use some of that Canteen spirit today.