The Thrilling 2017 Isles of Capri Yard Sale – Treasures for All! 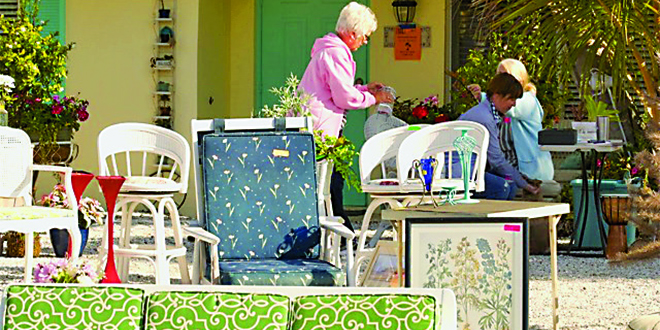 Photos by Jory Westberry |Variety and bargains in 2017. Mark your calendars for January 27, 2018 for the next Capri Yard Sale!

It’s hard to believe that the first all-island yard sale was 30 years ago and they get bigger and better each year. 2017 was no exception judging by the numbers of golf carts, bicycles and cars that cruised the isles on January 28th looking for that “one in a million” find.” Each year I’ve found “diamonds in the rough,” (sometimes verrry rough), as I weave my bike past treasure-seekers who want to buy that special item that makes family history.

Jeri Neuhouse, of Capri Realty, told me about a buyer who bought an old chess set a few years back and when it was examined at home the drawers held hand-carved chess men made of ivory and onyx. Pretty great purchase for less than $10. I should be so lucky! According to Jeri, some amazing things have been sold over the years including a Corvette and a house!

I chatted with lots of bargain shoppers this year from all over the country; some of the places they represented; Ohio, Pennsylvania, North Dakota, West Virginia, Indiana, Wisconsin, Illinois, Delaware, Georgia, Michigan, New York City (LOL), Massachusetts, Montana, New Hampshire, New Jersey, Ontario and more. Of course, I couldn’t interview all of the shoppers, I was busy shopping. There were browsers that spoke many languages, some I recognized and some nyet.

Barry and Susan Smith have been coming to the sale for two to three years.

Barry told me, “The girls are too slow, they stop and look at all the little stuff and I just breeze through. We also like flea markets.” They were still looking for that treasure when they breezed on.

I noticed a man examining an old metal gas can and he told me he had actually worked for the company that made that can! Jim lived eight blocks from the company in Wellsburg, West Virginia and worked there from ’65 – ’66. He didn’t buy the can, but he had a great trip down Memory Lane! Jim and his wife, Pam Mirasola, have been coming to the sale for five years.

Anne Stoll and Debbie Wiseman were looking for nothing in particular, but Anne 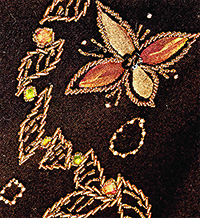 shared that she paid $20 for a beautiful painting of a baby cardinal at a past sale. She did some research and found it was painted by a Chicago Institute of Art graduate and was worth $500. Ka-jing! They were looking forward to lunch and the best place for Bloody Mary’s after shopping.

I overheard Mark Colwell, from Marco, telling his wife, Donna, “NO CHAIRS!” She rolled her eyes and said, “That’s why he drives the VW to the sale, so I can’t
buy any!”

Friends of Frank Lazaro, Lou and Mary Lindinger perused the tables and Mary admitted that, “We probably don’t need it, but we’ll buy it anyway!”

Get this – Julie Wegner, from Ekhart Lake, Wisconsin, was talking to a pharmacist from Waupun, Wisconsin during the flight to Ft. Myers. The kind passenger told her about the big yard sale and, there she was, enjoying every minute.

Capri resident Ernie Craigo absolutely had me laughing off my stool at the chickee at Pelican Bend. I asked him what’s the best thing about the yard sale.

“Gettin’ the stuff back I sold ten years ago, we don’t keep it, just rotate it. The only time stuff leaves the island is when they move and take it with them. I used to see who bought my stuff and go borrow it when I needed it! Saved on storage space.”

Ernie wasn’t thrilled about the traffic, as were others I spoke with, but he had an interesting solution. “Drink the night before and stay in bed ‘til noon!”

The staff at Pelican Bend was looking forward to the customers on sale day. They said the shoppers are thirsty!

Joe and Shirley Turner are here three weeks every year for a vacation from the cold in Georgia. Shirley elaborated. “This is our fourth straight Capri yard sale, we love it here. Last year I bought a small Christmas tree. I have about 14 of them, but since we drive we have to find things that will fit in the car.”

That could really cramp your style, I’d get a trailer!

Ken and Deb Crossman were at the sale for the first time after living in Naples for four years. 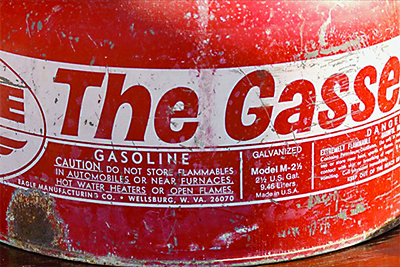 The object of much can-ster-nation.

They both thought there was a lot of good stuff and good prices. “People are very friendly, but the parking is a problem.”

Maybe we need to rent out golf carts and bikes in the future?

“We’ve been here for eighteen years, since 1999!” And Pat and Rachel Canarelli haven’t missed a year since they started coming. “You can buy anything from an ornament to a boat. I bought two cases of CDs last year in beautiful boxes and they were all groups and music my kids loved.” He was a hero.

Pat consulted his phone several times and relayed the number of steps they had taken while shopping. “12,361 steps, that’s the equivalent of 3.7 miles.”

His wife Rachel said, “It’s great weather, your junk is our treasure AND we get our workout while shopping!”

Can’t beat that, can you?

Marco Island resident, Gladys June, shopped the sale for five years and brought her mother for the first time. They were clearly having a ball! Gladys reminisced about a clear glass candy bowl she bought several years ago. The owner said it belonged to her great, great grandmother and Gladys had to promise not to sell it because the owner wanted it to go to a great home. She has treasured it ever since and, true to her word, never sold it. Not bad for $5, eh? Did I mention the crystal ball on the lid that refracts light all over her house?

A couple from Wappingers Falls, New York have been coming for five to six years, but today Pat Siegel was ecstatic over a coat that she bought from our neighbor Maggie. The coat, from Egypt, was black with embroidery and hand-sewn beadwork covering the front and back. Her husband Jim looked on with a smile, happy that his wife found her treasure.

And that’s what it’s all about, isn’t it?