The Teapot and the Scorpion 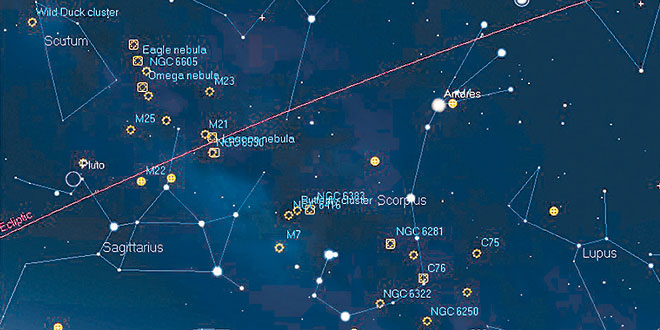 Looking South, June 26 at 11:00 PM. Also be sure to check out the conjunction of Venus and Jupiter if the clouds clear out early! SUBMITTED PHOTOS

Tonight the two brightest, or at least the easiest to find, constellations of the zodiac are riding high in the sky; Sagittarius the Archer or Centaur (actually it’s both) and Scorpius the Scorpion are easy to locate. Sagittarius has the famous teapot asterism that really jumps out of the jumble of stars that fill this region of the sky; and Scorpius is one of the very few constellations that actually look like the thing they are supposed to represent.

The teapot asterism consists of eight stars, all roughly equally bright. This time of year the teapot appears level, as if sitting on a stove, but in the fall it tips over and appears to be pouring out its load of tea. Fairly close to the tip of the teapot’s spout is the direction to the center of our galaxy, and the giant black hole at its heart. We see nothing of this, as this whole area is choked with gas and dust obscuring our view, but astronomers can use infrared cameras and radio telescopes to get a look.

Here in Florida, Scorpius rides fairly high in the sky. From the northern U.S. or Canada the tail grazes the trees on the horizon; on Marco we can even see the rather faint constellations underneath the stinger. Antares is the bright red eye of the scorpion, one of only two red supergiant stars visible with the naked eye. (The other one is Betelgeuse). Antares has a faint green companion, discovered by accident when the Moon briefly covered the bright red star, allowing the faint companion to shine out on it’s own. Such an event is called an occultation, and is not uncommon, although bright stars like Antares being covered are modestly rare.

If you happen to be out earlier in the evening, be sure to check out the show happening in the western sky. Venus and Jupiter are approaching each other more closely every night this month, until finally on June 30 they will be less than the diameter of the full Moon apart! Such an event is called a conjunction and is not uncommon. This one will be spectacular due to the brilliance of the two planets, and their proximity to each other.