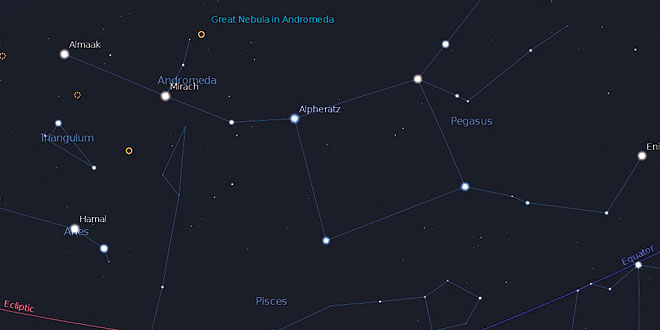 John Flamsteed was born in 1646 in England and was the first Astronomer Royal. Flamsteed’s particular astronomical passion was the careful mapping of all the naked eye visible stars. Flamsteed had this idea that the stars were forever fixed in their relative positions and his life’s work would be the final say on the matter – he considered this his own path to immortality. If you recall Bayer’s catalog used Greek letter designations for the stars and was thus limited to just 24 stars per constellation. Flamsteed’s method was to simply apply a number to each visible star in a given constellation according to increasing right ascension. Even today we can refer to a star as 61 Cygni for example. But simple numbering was no longer accurate enough; each star had to be carefully plotted in its own spot on the celestial sphere to make easier the plotting of planetary orbits, and the identification of variable stars and novas. For this purpose Flamsteed used a small telescope, adequate for his day but would be considered poor quality now.

In 1690, Flamsteed was working his way through the constellation Taurus and he plotted an unremarkable star called 34 Tauri. A few days later he returned to the same spot and was chagrined to find he had made a mistake in plotting its position. This time he took extreme care in plotting the exact position of 34 Tauri – and never looked at it again. But Flamsteed made no mistake in position! The star 34 Tauri had moved; nowadays we call it the planet Uranus.

Flamsteed spotted the planet Uranus almost a century before anyone else and missed out making one of the greatest astronomical finds in history – all because of his preconceived notion of fixed stars. To be fair, everyone in his day thought the stars positions were fixed so he can’t be entirely faulted; but even today great discoveries are made by noticing details everyone else missed.

Flamsteed just worked with stars visible to the naked eye; his telescope was just an aid to plotting and indeed Uranus is visible without optical aid – barely. Tonight it is very high in the sky in the constellation Pisces, a little to the south of the Great Square of Pegasus. At magnitude 5.73 it is at the edge of naked eye visibility, but it is a cinch in binoculars. At the moment it is in an area of the sky devoid of bright stars; if you can point the binoculars at the approximate spot, Uranus will be the brightest star in the field.

Mr. Usher is President of the Everglades Astronomical Society which meets the second Tuesday of the month Sept. thru June at 7:00PM in the Norris Center, Cambier Park, Naples.