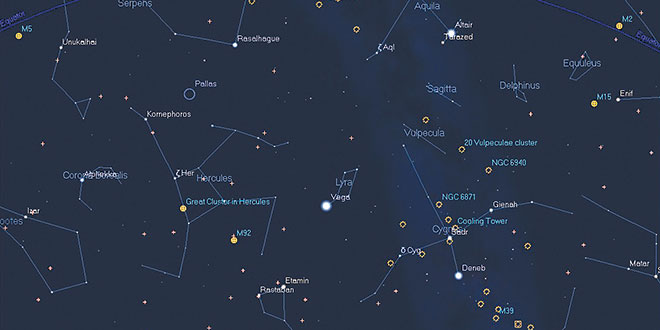 Tonight the Summer Triangle is near the zenith. The bright trio of Altair, Deneb and Vega lies embedded in the summer Milky Way. Except for the previously mentioned three, there are few bright stars in this region, but there are literally millions of dimmer ones. Scan with your binoculars from Deneb leftwards towards Sagittarius – innumerable stars will be revealed. On the chart you will see a number of tiny circles; each one marks the location of a star cluster visible in your binoculars. The brighter objects have names or catalog numbers listed on the chart.

Among the wonders in the sky this evening viewable with binoculars is the Great Cluster in Hercules (M13) which we have mentioned before. M13 has 25 to 50 thousand stars in it, whereas Omega Centauri (mentioned a few months ago) has about a million, so this cluster in Hercules isn’t the best or brightest – but it’s still pretty good. You can’t actually make out the individual stars with binoculars however, that requires a large telescope. Binoculars will show a disk with rather hazy boundaries. The Wild Duck Cluster (M11) in the exceedingly dim constellation of Scutum (the shield) has a V shaped pattern of stars superimposed upon it that looks like a flock of flying ducks to some people.

The beautiful constellation of Cygnus (the swan) contains the bright star Deneb, whose name means “tail.” It’s one of the relatively few constellations that look something like their name. Cygnus contains the asterism the Northern Cross – much larger than its southern counterpart. The mythology surrounding Cygnus is somewhat confused. Probably the most common story is that Zeus disguised himself as a swan to seduce the human woman Leda, and placed a swan’s image in the sky to commemorate his victory. Leda later gave birth to the Gemini Twins and the famous Helen of Troy.

Aquila, the eagle, contains the bright star Altair and a number of star clusters, but they are on the dim side. Aquila is notable for having two bright novas (exploding stars) within its boundaries in historic times. The brighter one, in 389 BC, was as bright as Venus! More recently, the second one in 1918 was brighter than Altair. The Allies, in World War I, considered it a sign of their impending victory. A nova is a violent explosion, limited to just the surface layers, of a type of star called a white dwarf. On rare occasions the entire white dwarf star can detonate in an incredibly powerful explosion called a supernova.