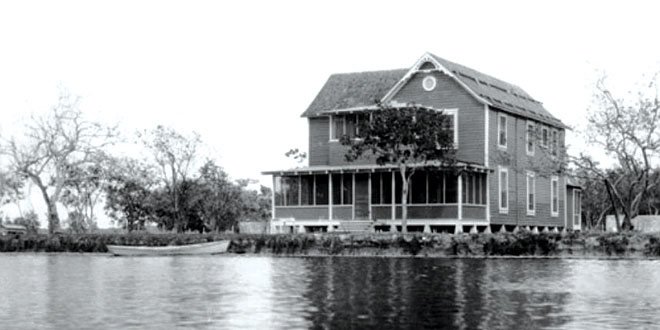 Mention the vessel Star of the Everglades to local, long-time residents, and it brings a big smile to their faces. Soon, they are flooded with memories of this fabulous boat which was aptly named the Star. Not only was the Star a luxury cruise boat for its day, but it also opened up the Ten Thousand Islands to world-class fishing. Digging into the vessel’s history, one quickly hears stories. Its first owner made money in the bird feather, or plume, trade in the late 1800s. The boat’s builder was extremely wealthy, becoming famous by running whiskey during Prohibition. The Star played a role in a classic 1958 film made in the Everglades, and several U.S. presidents had been on it. Of course, there are many twists and turns to every journey, and it turns out that there were actually two vessels named the Star…

The first and original Star (the “of the Everglades” was added later) was owned by Gregorio Lopez, who was born in 1848 and is the great-grandfather of Jim Webb, a third-generation owner of the local hardware store in Everglades City. The Lopez family moved to Southwest Florida in 1873 from Spain when Gregorio left to gain economic freedom. The family settled along a very remote river located southeast of Chokoloskee Island — later named the Lopez River. The Lopez home site, like most pioneer settlements in the Ten Thousand Islands, was built on an old Indian shell mound. Today, it is one of the first campsites on the Wilderness Waterway, which winds its way for 99 miles south of Chokoloskee through the Everglades National Park to the town of Flamingo on the southernmost tip of mainline Southwest Florida, Cape Sable. A tabby mortar rainwater cistern built by Gregorio Lopez in the 1890s is 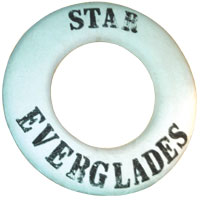 located on the old homestead; the family wrote an inscription into it that reads “child Lopes born April 20, 1892.” Those who have camped at this spot say that Mr. Lopez picked the most beautiful location for his home with an awesome view over the river.

Around the end of the 19th century, Gregorio had a financially rewarding career as a plume hunter, moving on to become an alligator hunter when plume hunting became illegal. He saw the start of the tourist industry in Southwest Florida and purchased the first yacht, Star, to take fishermen south from Everglade (the future Everglades City) down to the mouth of the Shark River in the Ten Thousand Islands for sport fishing. It is not clear when the first Star was purchased, but most likely, Lopez seized the opportunity around the time of the birth of Collier County in 1923, when the southernmost of Barron G. Collier’s chain of hotels — the Rod and Gun Club and the Everglades Inn —
began bringing in eager fisherman arriving weekly on a steamship line that Collier operated.

The Lopez River was not the only waterway named by Gregorio Lopez in the late 1800s. He named Plate Creek after having dropped a plate in the water, and he chose the name Onion Key for an island just inside the mouth of the Shark River simply because he ate his last onion there. Onion Key was another Indian shell mound. Its big claim to fame occurred during Florida’s 1920’s land boom when the Tropical Florida Development Corporation acquired an interest in three square miles of land, or 1,920 acres, and in 1925, drew out a subdivision of 8,933 lots, naming their project “Poinciana” and marketing it widely as “The Coming Miami of the Gulf.” It was almost impossible to travel to the project so most of their sales were

by advertising this “new Miami.” They were truly selling mangrove swamp land. The “development” died after the 1926 hurricane wiped out Onion Key which killed the Florida’s 1920s land boom.

Gregorio, Sr., and his Florida born wife, Lovie, (from a local family, the Daniels) raised three boys — Gregorio, Jr. (known as “Grady”), Alphonso and Joseph (Jim Webb’s grandfather) — and a daughter, Ida Mae. Passport records showed that in 1918 Gregorio, Sr., listed his occupation as a farmer, and he left the U.S. for health reasons to go to Honduras, which was then Spanish-owned. Gregorio’s sons stepped in and followed in their dad’s footsteps all becoming fishing guides, as were some of Gregorio’s grandsons. Gregorio, Sr., died at age 84 on August 4, 1932, and is buried at the Lopez cemetery on Chokoloskee Island.

An early Collier County fishing brochure mentions that the fabulous Shark River Cruiser, the Star of the Everglades, then operated by Grady (Gregorio Lopez, Jr.), was 40 feet long and could take parties of four or five. The vessel had its own cook, and in 1949, cost $55 per day with one guide (Grady). It pulled a small boat behind it; however, if one chose to have a second guide and a second small boat, the price increased by $20. At the time, there was plenty of competition, as the guide pamphlet shows 29 other captains guiding out of Everglades City in small boats ranging from 18 feet to larger Cabin Cruisers (many made locally and known as Chokoloskee Cruisers) ranging in size from 28 feet with two bunks to 34 feet with four bunks.

Grady Lopez was selected to take Franklin Delano Roosevelt fishing out of Everglades City; FDR being one of five U.S. presidents to have visited Everglades City. In 1947, President Harry Truman was in Everglades City for the opening of the Everglades 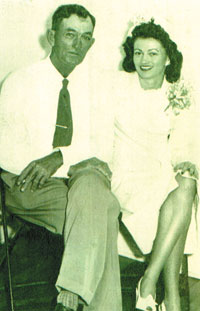 National Park, and he was entertained on the Star. After the airport in Everglades opened in 1947, not only could “fresh bait” be flown to the Star, but the brochure also said that if one had “pressing business problems, arrangements can be made to fly to and from the fishing grounds by charter service.”

In 1949, Collier County’s seat of government, Everglades City, was described as: “… fishermen are drawn (to it) from every state in the Union by persistent reports of superlative fishing every month in the year. In Everglades, the official weighing station in front of the Rod and Gun Club is the center of attraction every afternoon at 5 when the fleet comes in. There you see the evidence, the prize-winning fish, the tournament-winning fish, the world’s record fish, all caught on an Everglades boat with an Everglades guide. It is from the Everglades that most of the fabulous Shark River cruisers set out, an adventure comparable to an expedition into Africa bringing back impressive trophies and motion pictures of the greatest moments in anyone’s life.” It was in the early 1950s when President Dwight Eisenhower came to Everglades to fish and also was on the Star.

Grady turned over the ownership and operation of the Star to his daughter, Rosina, and her husband, Jim Thompson. By the 1950s, fishing guides left the Rod and Gun at 8 AM and were back at 5 PM, except for the Shark River cruisers which were gone for several days or up to a week or so. Jim Webb was a cabin boy in the original Star in 1957. His job was to clean up and make the beds. He laid out food, and like the rest of the crew and the guides, slept on the top deck when the vessel overnighted down in the Ten Thousand Islands. The guests

slept below in private cabins. Also located on that first level were the galley, dining area and bathrooms. The first Star did not have air conditioning and ran only in the winters.

In the most famous movie made in Collier County — the 1958 “Wind Across the Everglades” starring Christopher Plummer, Burl Ives, Peter Falk and Gypsy Rose Lee — there is a scene of a July 4 celebration filmed on the beach at Marco Island. As the Star travels just off of Marco’s beach, its decks are full of women who are, shall we say, of “dubious character.” They are seen smiling and waving at the townspeople with their families as they party on the beach and set off firecrackers. Trouble brews when a few of the local men on the beach are directly acknowledged by these women calling out to them from the Star. Immediately, the men get concerned looks and questions from their wives as to how they know these women!

In the early 1960s, the Star left Everglades City for the last time, and later returned as the new Star, a 65-foot-long, plush, richly-appointed yacht built in 1927 and purchased by the Lopez family to upgrade the experience for those wealthy enough to charter it for long trips down to the remote rivers of the lower Ten Thousand Islands. This Star would have an equally interesting journey. It moved to Naples for a few years. Then was lived aboard on Marco, moved to Remuda Ranch (now Port of the Islands) and came back to Marco Island to its final resting place in Goodland. To be continued…

I want to thank Jim Webb for his memories of the Lopez family and the many photos and brochures of the Star he has saved. I also will be thanking many others who contributed to this story, but will save the details until the next issue.