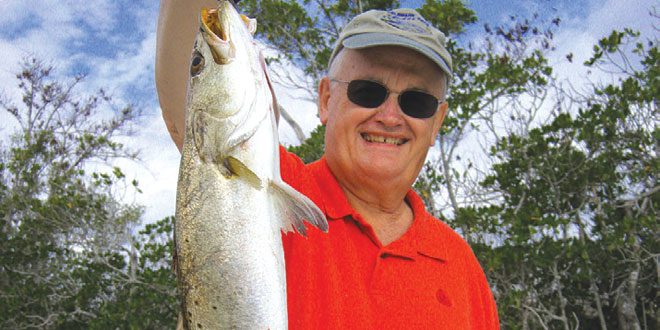 The spotted sea trout (Cynoscion nebulosus), also called speckled trout, specs, trout or spotted weakfish, is a common shallow water fish found in our area of the Ten Thousand Islands. They are closely related to the northern weakfish (Cynoscion regalis). Even though most of these fish are caught on shallow grassy flats, spotted sea trout reside in virtually any inshore waters from the outside flats to far up our coastal saltwater rivers where they often move to for shelter during the colder winter months. Contrary to its name, the spotted sea trout is not a member of the trout family (Salmonidae) but actually of the drum family (Sciaenidae), which includes the Atlantic croaker, red drum (redfish), black drum, and sand sea 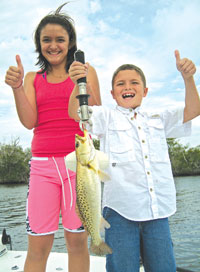 Angelina and Joey Scalogna hold up their spotted sea trout.

trout. As with all members of the drum family, mature males produce a “drumming” sound to attract females during the spawning season.

The average size of these fish in our area is 1 to 2 pounds, but in other areas like northern Florida, Louisiana and Texas, 5-pound “Gator trout” are fairly common. The current world record is over 17 pounds. They can be found anywhere from the western Atlantic and Gulf of Mexico, as far north as Massachusetts, all the way down to the Yucatan peninsula. Trout reach sexual maturity by the age of 2 years.

These fish are active most near dawn and dusk, and really like to feed the last hour or two of an incoming flood tide. The most common method for taking trout 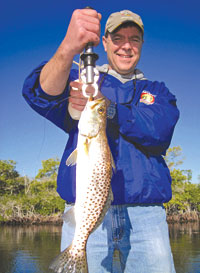 Scott’s fish, also known as ‘Gator trout,’ are part of the drum family.

Remember, the Ten Thousand Islands are located in the “South Region” and have regulations specific to the region. Currently, each angler can keep four trout. The fish must be larger than 15 inches but smaller than 20 inches. Each angler is allowed to have just one fish within that four fish max over 20 inches. The measurements are “total length,” which means you pinch the tail to determine its absolute longest length.

The spotted sea trout makes for excellent tablefare with a firm, white meat. Some trout caught may have worms embedded in the flesh. Apparently, the worms cannot survive 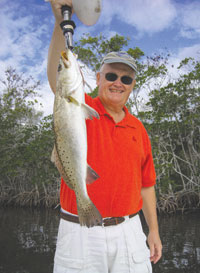 Lee with a nice trout. PHOTOS BY PETE RAPPS

in man even if the sea trout is eaten raw. The worms can easily be removed when the fish is cleaned to make the meat more appealing. The spotted sea trout has an excellent flavor and texture. Remember that care of the fish between landing and the skillet is important. Clean and place your fish on ice as rapidly as possible. The delicate meat of the trout loses quality rapidly if left unchilled, especially during warm weather.

You can find some excellent trout recipes on my website (www.CaptainRapps.com), both in video format and in writing with photos. Remember, please only take what you will eat for dinner; let them continue to thrive for generations to come. Need lessons or want to go fishing for some spotted sea trout? Give us a call.

September Fishing in the 10,000 IslandsBottom Fishing in Florida? Here Are Some Tips