The Southern Cross Shines Above Marco 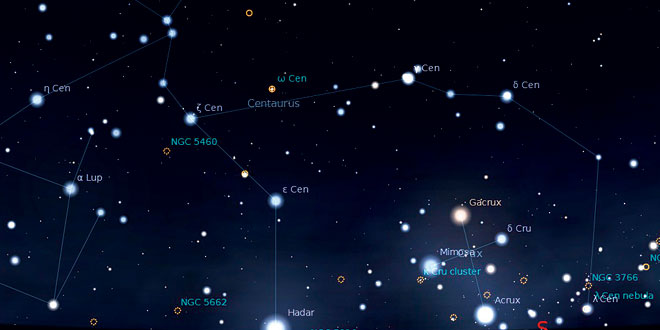 Once a year, it’s always nice to revisit the Southern Cross, technically known as Crux, as a reminder of just how far south Marco Island is located. Although the Cross rises above the horizon every day of the year, it is usually hidden by daylight, clouds or the ungodly lateness of the hour. Only at the end of April to mid-May can the Cross be seen by casual stargazers at a reasonable time.

An additional problem with Crux is that while it is visible to Marco Islanders, it is just barely visible. The constellation is quite bright, it’s just so low in the sky; the top three are still pretty easy to see, the problem is the bottom star Acrux. Just barely one degree above the horizon a stargazer must have a completely flat horizon and haze free skies. Although one of the brighter stars in the sky, Acrux did not receive its name until comparatively recently when navigators in the southern hemisphere gave it a shortened form of it’s Bayer Catalog designation of Alpha Crucis.

Just above and to the left of Crux is one of the wonders of the sky, Omega Centauri – the largest globular cluster visible in Earth’s sky. (It is marked w Cen on the chart.)

How large is it? Omega Centauri is larger in apparent size than the full Moon! Wait for a moonless night and view it with your binoculars; then you will see what ten million stars look like all gathered in the same place. Without binoculars, Omega Centauri is still faintly visible to the naked eye as a fuzzy spot.