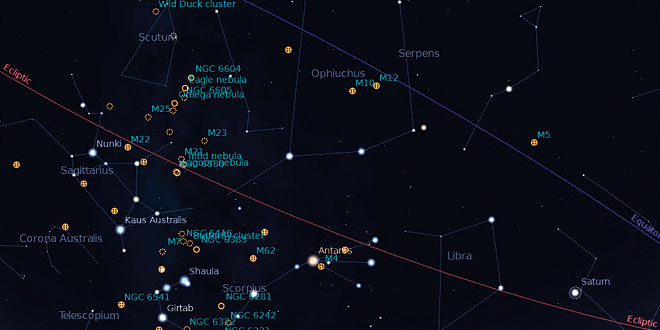 Ophiuchus extends downward inside the zodiac into close proximity of Scorpius. Ancient writers noted how he appears about to trample the scorpion and the scorpion is likewise about to sting Ophiuchus. Others have noted that this makes Ophiuchus the 13th zodiacal constellation.

Ophiuchus has a fair number of binocular objects in it due to its proximity to the Milky Way. In particular, note M10 and M12 which are modestly bright globular clusters. M5 is about twice as bright in the nearby Serpens. While you are at it scan the entire Milky Way in this region of the sky – it’s a treat!

Located about halfway between Ophiuchus and Serpens Cauda is a star, normally invisible even in binoculars, that has the interesting habit of exploding every twenty years or so when it becomes dimly visible to the naked eye. At some unknown point in the future it will likely explode one final time as a supernova; this supernova, when it occurs will be bright enough to cast shadows upon the ground!