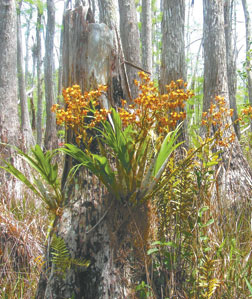 Courtesy of The Friends of the Fakacatchee

My intention was to write an update about the restoration of the cigar orchid, Cyrtopodium punctatum in the Fakahatchee Strand Preserve State Park. This has been a collaborative effort between the park and Atlanta Botanical Garden that has been generously supported by the Friends of Fakahatchee.

Over the past few years we have made real progress in terms of the conservation of this species, but there’s something bothering me and that’s what I really feel like writing about.

Before I do; a little background. Cigar orchids are the biggest and showiest of our native orchids and in the spring, large specimens of this species can produce sprays of hundreds of red and yellow flowers and they can be quite conspicuous.

Cigar orchids are a sun-loving species and were once a common feature of cypress domes and the edges of cypress forests. For thousands of years before the industrial logging of the 1940’s, a primary forest of huge bald cypress trees stretched out high above the deep swamp. In many areas the crowns of these trees interlocked and created a super canopy.

We can only dream about what that may have looked like but we suspect that, just like in the Amazon and other great gallery forests, an incredible diversity of epiphytes once existed there, including massive cigar orchids. I say once because they are no longer common; they are very rare.

A hundred years ago, there may have been thousands of cigar orchids in the 80,000 acres that comprise the Fakahatchee Strand Preserve. Now only a handful remains. To put that into perspective; ghost orchids, our most emblematic and enigmatic species, are rare for sure but Park Biologist Mike Owen has documented hundreds of them. Even after more than a decade of Central Slough and tram surveys, he has only documented nineteen cigar orchids. Aside from the wholesale destruction by industrial logging of the historic old-growth forest and the biological diversity that it fostered and protected, the reason why cigar orchids are so rare is because people collected them nearly to extirpation by wagon and truck loads. I can almost forgive our ancestors for what they did because they lived in a different era, an “Era of Exploitation.” In their day and age, swamp forests and flooded grasslands were seen as impediments to human progress and our national manifest destiny so we cut and burned and drained Florida into submission. Native plants and wildlife (it seems) were mostly considered to be commodities and only valued if they could be used or marketed. By about 1970, the zeitgeist evolved and the historic paradigm shifted from runaway exploitation to a sense of appreciation and conservation.

When Mike Owen and I first began pollinating the cigar orchids of Fakahatchee we borrowed some pollen from a lovely, robust cigar orchid that had lived for 50 years or so in a cypress dome about ten miles away in the Big Cypress National Preserve. Unfortunately, that cypress dome was located very close to a recreation area and when I saw that 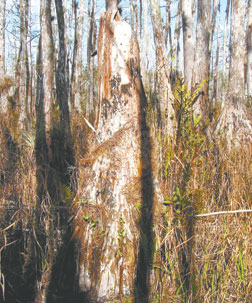 The Cigar Orchid has been stolen.

someone had posted a picture of it on the internet a few years ago, I felt encouraged in a way that it still remained there. In late February of 2011, I went out to check on the Big Cypress cigar orchid to see if there were any signs of flower spike development. After a few minutes of strolling through the dome, I began to wonder if I had passed it. I thought, “Come on; how could I have done that? I’ve been here dozens of times?” Then I realized the reason why I couldn’t find it was because it was gone, stolen. A wave of disgust washed over me and I felt almost nauseous. Someone had scraped that little monument of nature off its cypress stump perch and what I felt, more than anything was, how selfish. How selfish.

We are a selfish bunch, we human beings; aren’t we? It almost seems like a genetic defect. I wonder what did the person(s) who stole the Big Cypress cigar orchid do with it. Did they sell it? Were they desperate somehow and needed to steal it to survive, or did they just want it all to themselves? Did they even consider that they were depriving other people of the thrill of seeing that magnificent plant in bloom? Is it now in a private collection or strapped to a tree in someone’s yard? Is it still alive and thriving or in decline from stress and neglect? I guess I’ll never know. As I try to find forgiveness in my heart for this very selfish act and for my own selfish tendencies, I will remember one thing. The Big Cypress cigar orchid that Mike and I named BCNP1 is the father of many, now two-year-old, juvenile plants that were grown at Atlanta Botanical Garden from a seed pod collected from their mother CP13, one of the few remaining Fakahatchee cigar orchids. We out- planted a hundred of the descendents of BCNP1 and CP13 this year in Fakahatchee and we’re hoping to get permission to plant some of the remaining plants in Big Cypress National Preserve as well. Hundreds and hundreds more juvenile cigar orchids, bearing only the genetics of the Fakahatchee cigar orchids, are currently growing up in Atlanta and will be out-planted in the park over the coming years. Even though shadows of the “Era of Exploitation” are still sometimes cast upon the present, our cigar orchid restoration project is a light of the future and part of our collective legacy of generosity and a very tangible result of our “Era of Conservation.”

Dennis Giardina is the Everglades Region Biologist for the Florida Fish and Wildlife Conservation Commission and was formerly the Park Manager of Fakahatchee Strand Preserve State Park. He is Chair of the FOF Vision Committee.

To read more about the Cigar Orchid Restoration project see The Ghost Writer issues for: April 2007, December 2009, January 2010, May 2010, May 2011, which you can download from www.orchidswamp.org (click on Publications).

Reprinted with permission from The Ghost Writer, newsletter of the Friends of Fakahatchee,www.orchidswamp.org