The Secret of Seattle 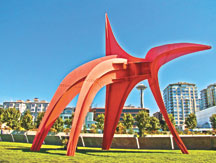 When people think of Seattle, they tend to think of gray skies and rain. In reality, the average rainfall is only about 37 inches a year, less than places like New York City or Atlanta and most of the rain comes in the winter months. In winter, there are at times endless days of clouds and drizzle. The secret of Seattle is that the summer months can be quite pleasant, with a string of sunny, warm days.

As Rome was built on a series of hills, so was Seattle and, as in many other cities, Seattle is neighborhood centric. Most guidebooks divide the city into its various neighborhoods.

Pike Place Market and the Waterfront are popular tourist areas. The oldest continuing market in the United States, Pike Place Market extends for 8 blocks on both sides of Pike Place. The multileveled buildings house produce, seafood, bakeries, unique shops, artisans and many dining opportunities from casual snack bars to sit down restaurants. In this preserved historic area, no chain stores are allowed except for the original Starbucks founded in 1971 on the corner of Pike St. and Pike Pl. Rachel the Pig, a large bronze piggy bank greets visitors; the money donated to Rachel is used for the Market Foundation’s various projects including a pre school and senior center. Behind Rachel is a visitor favorite; the Pike Place Fish Market, home of the singing fish throwers. When someone purchases a fish, the workers sing out as they throw it from one to another. There is usually a crowd of tourists surrounding the stall waiting for the show. The artisan stalls in the North Arcade are well worth visiting for unique gifts.

From the market, one can descend on an elevator (or take the stairs), cross Western Ave. and Alaska Way 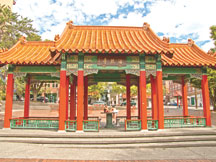 Chinatown in Seattle has been renamed the International District to reflect the diverse Asian cultures of this neighborhood.

to the waterfront. Immediately behind the market, on Pier 59 is the Seattle Aquarium. Walking south from the Aquarium eventually brings one to Pier 52 and the Bainbridge Island Ferry. Along the way are shops and restaurants, while Pier 57 extends out a short way into Puget sound. North from the aquarium are other restaurants, the Victoria Clipper embarkation point at Pier 69 and, eventually, the Olympic Sculpture Park. Run by the Seattle Art Museum, the park has more than 20 sculptures, including Calder’s “Eagle” which makes an interesting photo frame for the Space Needle.

From the sculpture park, it is a short walk up to Seattle Center and the Space Needle. The site of the 1961 World’s Fair (Remember Elvis Presley’s “It Happened at the World’s Fair”?), it is now home to a variety of museums and cultural opportunities. The Children’s Museum, Science Fiction Museum, and Pacific Science Center are here, as are Key Arena, McCaw Hall for ballet and opera, SIFF cinema, and Seattle Repertory Theatre. The music festival Bumbershoot is held here in early September. A fairly new attraction is the Experience Music Project (EMP). Seattle was the home of Jimi Hendrix and grunge music. Inspired by Microsoft’s Paul Allen’s interest in Hendrix and designed by Frank Gehry, EMP holds tens of thousands of pieces of music memorabilia. The International Fountain puts on its own sound and water show during the day, with sound and light shows in the evening. Finally, a visit to Seattle Center wouldn’t be complete without ascending the Space Needle for its panoramic views of downtown Seattle, Puget Sound, and Lakes Union and Washington. It is expensive ($18; $16 for seniors), but purchase of Go Seattle or Seattle City Pass cards provides discounted admission to Seattle’s top attractions including the Space Needle. 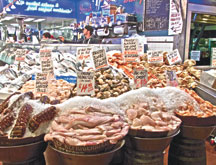 Some of the bountiful fresh seafood found at Pike Place Market.

Center, it is easy to explore the neighborhoods of Queen Anne with its lovely homes and views of the Sound from Kerry Park or Belltown known for its restaurants and nightspots. Beware a walk up Highland Drive in Queen Anne is quite steep, but you do pass a restaurant that claims to have the “most visited breakfast in Seattle”!

An alternative from Seattle Center is to take the Monorail to Westlake Center. Also built for the 1962 World’s Fair, the monorail whisks its passengers down to the central retail section of the city. Here are major brand name stores and two malls, Westlake and Pacific Place. Pacific Place houses brand stores and a few restaurants while Westlake has more diverse shops including the Made in Washington store featuring Washington state products, a restaurant, and extensive food court.

From Westlake, the tunnel buses go to Pioneer Square and the International District.

Points of interest in the Pioneer Square area, so named because it was the site of the original city, include Occidental Park with its totem poles and Firefighter’s Memorial, Smith Tower, Seattle’s first skyscraper, historic Pioneer Square Park, and the Klondike Gold Rush Museum. Actually an indoor national park and free to the public, this museum features the role Seattle played in the Klondike gold rushes. I particularly enjoyed the story of John Nordstrom who sold his claim for $13,000 and started a local shoe store which evolved into the popular Nordstrom department stores of today. Adjacent to this area are Safeco and CenturyLink (formerly Qwest) Fields, home to the Mariners and Seahawks respectively.

Pioneer Square evolves into the International District, a name changed from the original Chinatown to reflect the various Asian cultures here. In addition to the welcoming gate, Wing Luke Museum of the Asian Experience, and Hing Hay Park, this area 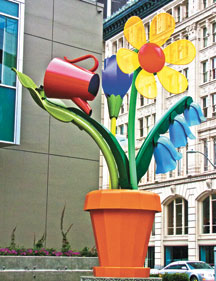 Whimsical sculptures such as this giant flower pot are found throughout Seattle.

is home to a variety of Asian restaurants and two interesting markets, Hau Hau, and the not to be missed Uwajimaya.

Art lovers have much to see in Seattle. There is an extensive public art program, much of it whimsical; my favorite was a giant bright red popsicle in Belltown! The Seattle Art Museum is a short walk from Pike’s Market, while the Seattle Asian Art Museum is further afield in beautiful Volunteer Park overlooking the city in the Capital Hill neighborhood.

Restaurant choices are plentiful in Seattle and fresh seafood abounds, especially wild salmon, halibut, and Dungeness crab. “Crab pots” are popular in some of the waterfront restaurants; they are like crab bakes in a pot. Even ethnic restaurants feature fresh seafood. We had an amazing seafood paella at Tango, near the Convention Center and a wonderful cioppino at the Pink Door Italian restaurant at Pike’s Market.

Deciphering the public bus transportation system in Seattle isn’t the easiest, but with the King County website trip planner, we were able to negotiate the city. There is a ride free area that encompasses most of the tourist spots from 6:00AM to 7:00PM. The tunnel buses (in the ride free area) are the best way to get from downtown to Pioneer Square or the International District. Taxis are plentiful, although it may be best to call for one rather than try to hail one; we found Yellow Taxi reliable.