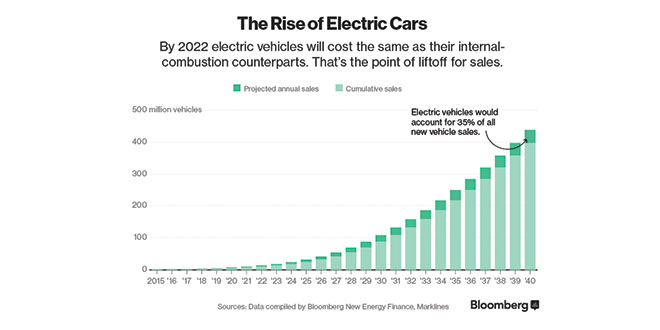 Question: How will sales of Electric Vehicles (EVs) impact oil demand and how prevalent is the use of EVs at this time?

Answer: More Electric Vehicles (EV) on the road will certainly reduce oil demand. During the last quarter of 2015 the total number of EVs in use worldwide reached the one million mark. To put this in perspective, there are roughly one billion cars in use and the number of EVs on the road is one million, so EVs only make up 0.10% of the market. The integration of EVs into the marketplace simply hasn’t materialized as quickly as anticipated, even before the recent oil price meltdown. Therefore, the extent that increased demand and sales growth will influence oil prices at this time is extremely limited. Actually, low oil prices have decreased demand and sales of EVs.

Accurate data on EV sales isn’t available from all countries, but according to Raymond James Energy Research Team, global sales in 2015 were approximately 485,000 bringing the total number in use to over one million. Even with less expensive fuel, the sales growth rate remains very high, up in excess of 50 percent worldwide for the past two years.

China is easily the largest EV market by units because of population yet the growth rate there is low. Norway leads the inclusion rate with a 23% penetration rate of overall car usage. Almost 100% of Norway’s electricity is generated by clean hydropower. Not surprisingly, the top reasons for purchasing an EV in Norway are incentives like free toll road use and no purchase taxes. According to BusinessInsider.com, other countries penetration rates of EV/fuel-powered vehicles are from the highest to lowest proportion: Netherlands, Sweden, Denmark, Switzerland, France, Ukraine, China, Germany and the United States in last place.

Outside of Norway, there are two deterrents to sales: higher initial cost of EVs, and the expense of replacing batteries. As technology improves battery costs are declining, as are the initial purchase prices. On March 31, 2016 Tesla introduced the Model 3 with a starting price of $35,000, (roughly half the cost of the Model S) set for release in 2017. For the car buffs out there, the 2017 Tesla Model 3 has a minimum driving range of 215 miles and does 0-60 in less than six seconds.

Assuming that every new EV will replace or displace an existing gas or diesel vehicle starting with the 2012 models on the road, we can forecast growth rates out to 2020 without too much guesswork. Every EV sold between 2012 and 2020 will reduce a quantifiable amount of oil demand using an average of 12,000 miles driven per car each year. Crunching the numbers and looking at global oil demand, EVs could decrease oil demand by 0.20% by 2020. This isn’t a big enough number to upset the oil sheiks of Saudi Arabia anytime soon.

The Saudi royal family does have problems of their own though. With oil prices so low, for so long, they’ve had to make concessions like the rest of us and practice austerity. This might explain why Prince Turki Bin Abdullah didn’t use the valet parking service at the Jumeriah Carlton Tower Hotel while visiting London He illegally parked his gold-plated Lamborghini Aventador, Rolls Royce, Mercedes G63 6×6 and the Bentley Flying Spur, collecting oodles of tickets and fines. In response, according to The Telegraph of London, a local jokester trying to blend in covered his Ford economy compact model in gold foil. I wonder whose cars would be towed first.

The Saudi’s do plan to create a $2 trillion sovereign wealth fund for the transition to a post-petroleum economy. This could be an indicator of how they feel about EVs in the future. In contrast, OPEC predicts only a one percent global penetration rate for EVs by 2040. They’re much more optimistic about hybrids, forecasting that they’ll make up 14 percent of all car sales at that time. Meanwhile, Bloomberg states that EVs could account for 35% of all new vehicle sales by 2040.

These facts show that increased sales EVs won’t put pressure on oil prices today or in the foreseeable future through 2020. It will eventually happen, but it is irresponsible to predict EV sales and penetration rates beyond the next ten years. Sales of EVs will affect the oil market, to what degree depends on when sales of EVs increase to a more meaningful level. Enjoy the ride, stay focused and invest accordingly.

Investing involves risk including the possible loss of capital. There is no assurance that any investment strategy will be successful. Asset allocation and diversification do not guarantee a profit nor protect against loss. The opinions expressed are those of the writer, but not necessarily those of Raymond James and Associates, and subject to change at any time. Information contained in this report was received from sources believed to be reliable, but accuracy is not guaranteed.