The Sand Comes Trucking In 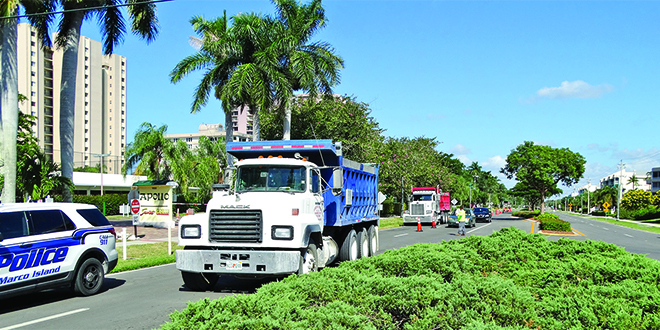 Earth Tech Enterprises of Naples took to the South Beach area of Marco Island like a small, but finely tuned platoon of “combat engineers” as they prepared the way for the delivery of over 900 truckloads of newly mined high quality beach sand from the quarries owned by Stewart Mines in Immokalee last week.

The project itself will see over 13,000 cubic yards or 20,000 tons of sand distributed onto about 4,000 feet of beach, extending from the south end in a northerly direction. That project will replenish sand that was lost as a result of Tropical Storm Debbie in 2012, and is part of a FEMA grant due to the damage sustained.

“The sand we will be utilizing will be a larger grain and better quality, one which we have

had good luck with in the past,” said Gary McAlpin, who serves as the Coastal Zone Manager for Collier County. “One of the qualities of this material is that it should stay on the beach longer,” said McAlpin.

McAlpin had addressed the Marco Island City Council during its October 17 meeting to brief the council on the scope of the project and answer any of their questions. The county was fast tracking the work to take advantage of the funding provided by FEMA. It is anticipated that the project will be completed within 10 days from its inception.

Activity on the beach.

Once on the beach the trucks drop their loads at a central point where their cargo is then loaded upon larger earthmovers, and distributed along the project boundaries and properly graded.

Earth Tech Enterprises has done similar projects such as this up and down the Southwest coast of Florida and most recently in the city of Naples. Trucking the material in saves considerable monies and allows a better quality material to be utilized, versus the old standard of dredging and pumping sand found offshore that may have higher percentages of shells, requiring considerable raking.