THE RICHEST WOMAN IN AMERICA: Hetty Green in the Gilded Age 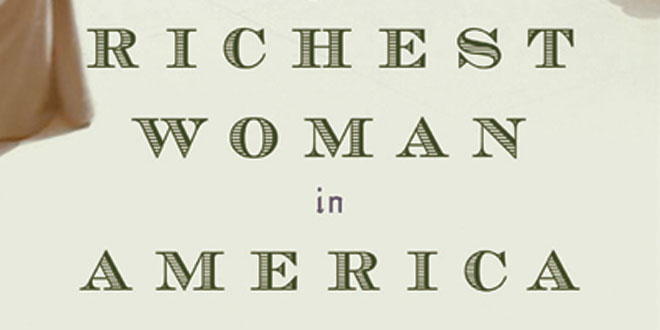 “Before deciding on an investment, seek out every kind of information about it.” To Hetty Robinson Green, this was just common sense – work hard to learn everything possible about a venture before committing. Some saw her as cruel and heartless because of her no-nonsense-when-it-comes-to-business philosophy. Ironically, Hetty never paid workers slave wages, paid off government officials, bought off public land or manipulated stockholders as did many of her more celebrated male counterparts. She gave much to help others, but quietly, without fanfare, without having her name chiseled on the hospitals, libraries, settlement houses, and schools she assisted. Her low interest loans helped save cities more than once – including New York City.

She believed in keeping cash at hand to buy when everyone was selling. A cardinal rule for her was never to borrow in order to invest. She enjoyed investment and growing money, lived simply, believed railroads and real estate were the best investments. As a still-young woman, Hetty owned the town of Cicero, Illinois, as well as a sizable share of the present Chicago Loop, among many other properties and/or mortgages. By middle age, she had property across the country. At the time of her death at age 81, she left her children a fortune equal to two billion dollars in today’s currency. The story of how she got to that point makes this book a great read.

Edward Mott Robinson made his fortune from the whaling industry of New Bedford, Massachusetts. When Hetty Howland Robinson was born November 21, 1834, Edward was disappointed to have a daughter and not the anticipated male heir. Mrs. Robinson immediately became with child again, but baby Isaac died a few weeks after birth. Mrs. Robinson took to bed and an angry Mr. Robinson sent Hetty to live at her maternal grandfather’s house.

Although it was emotionally a cold existence, with all adults in her life failing to adequately care for her, at the age of six, Hetty found the way to her grandfather’s heart. She began reading the stock quotations and commerce reports to him when his eyesight dimmed and assisted in his correspondence. Gideon Howland informed his young granddaughter that some day she would inherit a lot of money. Wealth was deemed a virtue by Quakers, and great wealth was an election by God. Hetty grasped that in her Quaker family, growing money was job one. When she was eight years old, Hetty ordered the carriage to be brought around, went to the bank and opened her own account with her allowance money. There she met her first true love – compound interest!

One of the reasons I love reading biographies, memoirs, and true crime (I also read a lot of fiction) is that no one could make up the things real people do or the coincidences that occur in their lives to move events along. If they did, it would seem contrived and insulting to the reader. The Richest Woman In America reads like a novelistic narrative not only because it is well written but also due to Hetty’s place in society. The cast of characters who touched Hetty’s life reads like a “Who’s Who” in 19th century America and Europe. All of the uber rich of that time, the Astors, the Vanderbilts, Carnegie, Rothschild, Rockefeller, et cetera, but also the campaigner Abraham Lincoln, the Stowes and others who worked for the Quaker virtues of peace and justice.

Hetty was not just about growing money. She was an attractive, intelligent, witty, charming person, very much in demand at soirees and dinner parties. Several anecdotes from the book illustrate how vivacious and witty she was. My favorite is the visit of the Prince of Wales, Queen Victoria’s son, in Fall 1860, to New York. Hetty attended his welcoming dinner party and after the meal, queued up in the 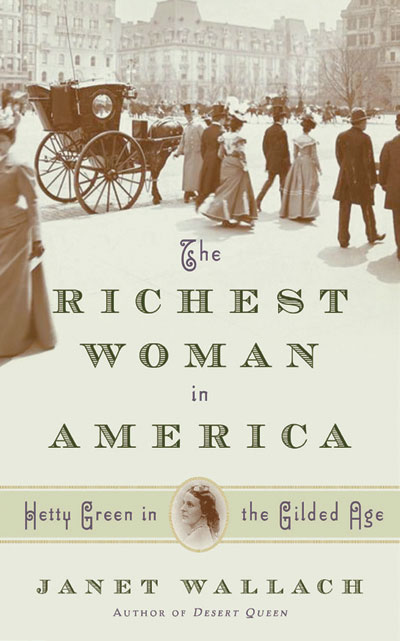 reception line. When he was introduced to her as the Prince of Wales, she replied, “And I am the Princess of Whales.” He was charmed (and charming) and replied, “Ah, I have heard that all of Neptune’s daughters are beautiful. You are proof of that.” Then he whisked her away on the dance floor.

Another side of Hetty was that she liked things to come out even. When she was wronged, she took action. She sued. Hetty was involved in several lawsuits throughout her lifetime. One she filed in a dispute over her Aunt Sylvia’s will dragged on for years, apparently is still cited in lawsuits and legal texts because it was the first case to use statistical evidence – the Howland Will Case. At other times, when the wrong was more personal, such as a judge being paid off to decide against her, or a financier dealing unfairly with her, she would bide her time, sometimes two or three years, and when the opportunity came, she used her financial leverage to balance the scales.

I learned a lot reading this book, foremost being that Hetty Green existed. She was unknown to me, though I consider myself a reasonably well-read person. Also, I learned that junk bonds existed in the 19th century, how greenbacks were used by the rich to become even richer, how the proliferation of regional railroads led to the necessity of the transcontinentals. Janet Wallach writes so clearly that I found myself engrossed in her description of the financial panics and recessions of the Gilded Age and Progressive Era, the span of Hetty’s adult life.

In several places in the book, Wallach compares Warren Buffett to Hetty Green. They both pursued simplicity in their lifestyles, loved seeing money grow, gave away large sums to worthy causes and both saw railroads as integral to a strong America. One major way in which they differ is that Buffett has lived in the same modest home for decades, while Hetty lived in hotels and boarding houses, constantly on the move. Her reasons for this were several. Property: She had properties literally everywhere that needed her personal attention. Weather: The rich left the cities and went to rural areas during the hot weather. Safety: She was constantly besieged by requests for money, by both letters and people accosting her in person. Health: And, Hetty had a pervasive fear of being poisoned. Her father had whispered to her on his death bed that he had been poisoned, and she believed her Aunt Sylvia had been, as well. She believed the anonymity of a boarding house or hotel kitchen gave her some protection from being poisoned.

Hetty was married at age 34 to Edward Green, had one son and one daughter. She was a loving mother. Her son Ned was an astounding success, gifted with his father’s personality and his mother’s focus and hard work. The marriage was another story, interesting and long-lived, bu they did not cohabitate for much of the marriage. It would take many paragraphs just to outline this complicated relationship. They stayed friends even after Mr. Green’s final betrayal proved too much for Hetty to bear. It’s a story well worth reading.

As a footnote, I would add an intriguing fact about Hetty Green. As much as she accomplished in a man’s world, as fiercely independent as she was, and as much as she enjoyed besting men who tried to belittle her in financial situations, she was not a suffragette. In fact, she had no patience with them and felt that women voting was a sorry idea, to be sure. A woman of many facets, was Hetty Green. Oh, and don’t even ask what she thought about Teddy Roosevelt!

Maggie Gust is a life-long avid reader whose career path has included working as a teacher and in various positions in the health care field. A native of Illinois, she has lived in Florida since 1993 and presently works from her home here on Marco Island