The return of the King of the Planets 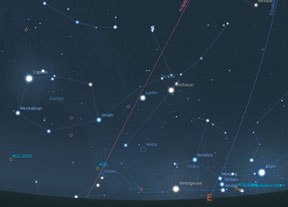 Tonight, Jupiter returns to the early evening sky after an absence of some months. Jupiter is nearing opposition which will occur on December 3; Jupiter will be 180 degrees away from the Sun and will rise as the Sun sets. Opposition is important because Jupiter will be at its closest point to Earth on this pass around the Sun. Jupiter will be extra big and bright the next couple of months just begging to be viewed with binoculars.

Viewing Jupiter with your binoculars tonight you will see four of its largest moons (Jupiter actually has more than 60!). Above the planet are Io, Europa and Ganymede working your way outwards, and on the other side is Callisto. They are easy to recognize as Jupiter’s moons as they always lie very nearly on a straight line. Each moon is an interesting world in its own right and all are about the size of our own Moon and larger. Ganymede in fact is larger than Mercury, but less massive, being composed of more rock and ice and less metal.

Jupiter’s moons constantly move around, shuffle their positions and move noticeably in just a few hours. Usually two or three are visible, often all four are; on rare occasions Jupiter may appear moonless for a very brief time. The next time that happens is in 2019, exactly seven years from tonight.

Jupiter is inside Taurus tonight; an extraordinary old constellation dating back to the Bronze age at least and possibly all the way back to the Neolithic. Taurus actually only depicts the head and forequarters of a bull with the head being the most prominent part. The V-shape of the head is formed by the star cluster called the Hyades; the bloodshot eye of the bull is the first magnitude star Aldebaran. Despite appearances Aldebaran is not a member of the Hyades but merely lies along the same line of sight less than half as far away.

Taurus is the home of the Taurid Meteor shower which occurs throughout the month of November. Taurid meteors are few in number, perhaps seven per hour, but tend to be remarkably bright.