The Reddish (or is it Whitish) Egret? 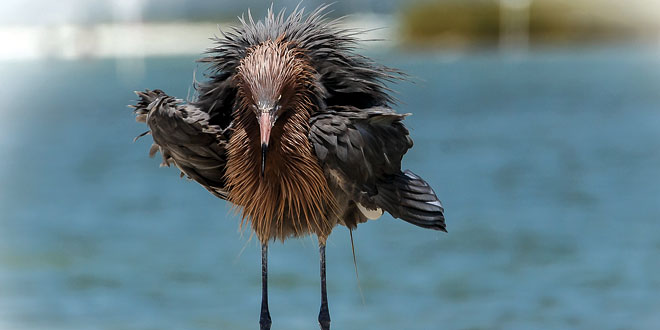 One of the most entertaining and beautiful wading birds to watch along the Marco Island beach, especially in the Tigertail Lagoon area, is the medium sized egret named appropriately the Reddish Egret (Egretta rufescens). Once, nearly completely annihilated from the state of Florida, the Federal 1918 Migratory Bird Treaty Act was passed, protecting the Reddish Egret and all other herons and egrets from plume hunters. Today, there is a population estimated between 1,500 and 2,000 in the United States – mostly found along the Texas coast, a few in Louisiana and southern Florida. We are so fortunate that there are a few permanent resident Reddish Egrets here on our island. They are a species protected at both the state and federal level and are listed as Threatened under the Endangered Species Act.

They inhabit brackish or salt water marsh or mudflat areas and prefer to nest on coastal islands; Marco Island’s Tigertail Lagoon is the perfect habitat. This bird stands almost three feet tall, but typically is between 27 and 32 inches in height, with a wing span up to about 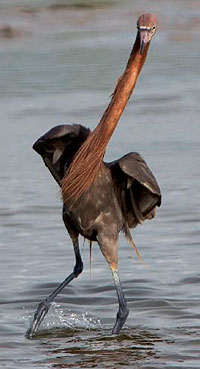 The Reddish Egret can stand up to three feet tall and have a wing span of 50 inches.

50 inches. It usually keeps its neck in an “S” shape when standing still and can live to be 12 years in age.

To make it confusing, there are two color “morphs” of the Reddish Egret. Same species – with two color forms possible! They were once thought to be separate species, but they are not; they simply differ in the color of their plumage. The dark morph has a slate blue to gray body with a red or rusty colored shaggy head and neck plumage.

The white morph has all white plumage. Both have large, pointed pink beaks with a dark tip. They have cobalt blue legs and feet. If not breeding, plumage is duller. If bird watching, to not confuse the Reddish Egret white morph with a Great Heron, it is important to note the bill and leg colors.

The most telling characteristic of the Reddish Egret is the manner it hunts its prey in the shallow waters of mudflats and marshes. This dancing bird will lift and curve its wings over its head and body to shield the surface water from glare, improving its 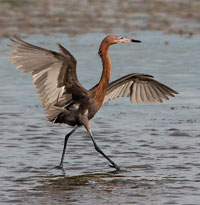 This Reddish Egrets “dances” around its prey in shallow waters near Tigertail Lagoon. PHOTOS BY JEAN HALL

sight of the small fish and crustaceans it preys upon. It will circle and “dance” around with its wings in the air, schooling the prey to make it easy for it to stab with its long, sharp bill. After eating its meal, the Reddish Egret will regurgitate bones and other inedible parts of its prey – much like an owl. To watch this amazing and delightful display of their hunt, walk the beach in the early mornings or as the sun is setting, when the Reddish Egret is the most active in feeding.

This egret reaches maturity at three or four years. Nesting occurs with other coastal wading birds, such as Great Herons, Snowy Egrets, and even Roseate Spoonbills, in nearby mangrove islands. Both sexes help build a ten to twelve inch diameter nest of sticks and twigs, replenishing the nest throughout the incubation of the eggs. The pair will have two to three smooth, unmarked, pale, blue-green eggs that hatch in about 25 days. Both adults will care for their young. The chicks will fledge (fly) in about one month.

According to the Texas Parks 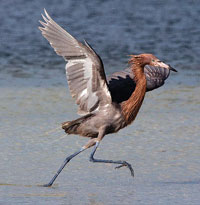 The Tigertail Lagoon and Sand Dollar Island “spit” ecosystem, state designated as the Big Marco Pass Critical Wildlife Area, is the home, nesting and feeding grounds to over 60 species of migratory and resident shorebirds and wading birds. If you have the opportunity to take a walk or kayak along the shore or lagoon and witness the Reddish Egret in action, you are in for a very special experience in the paradise we call Marco Island.