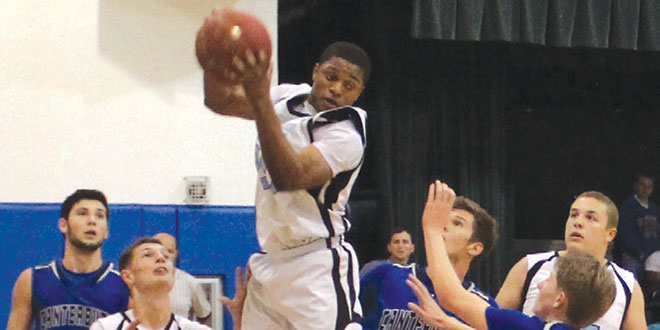 MIA’s Patrick Michel comes down with rebound in the Rays victory over Canterbury.

Canterbury School held 10 and 12-point leads through most of the second half against Marco Island Academy (MIA) on December 7.

Canterbury looked like it would win in a breeze, leading 55-43 with under five minutes to play.

Tyler Gresham hit the boards, scoring four points. Canterbury tallied three points, but the Rays would not be deterred.

MIA’s Cole Stretton took over. He scored on a steal. Made good on a three-point play, stole the ball again and on a behind-the-back pass Brian Flynn made a layup to bring the Rays within six at 60-54 with 3:33 left in the game.

Canterbury, who had controlled the game, felt the pressure. Having avoided turnovers throughout, the team made many at the end.

Brandon Estremera swished a three-point shot. Stretton made another steal to bring the Rays to within one point with 1:24 to go.

out, Canterbury fouled Stretton who calmly sank both foul shots to give the Raysa 61-60 lead with just 34 seconds to play. Gresham made an aggressive rebound basket, making the score 63-60 with seven seconds left.

Canterbury pushed the ball up, resulting in a foul shot to put the visitors within two at 63-61.

Estremera made a foul shot, but then fouled a Canterbury shooter, giving him two foul shots. He made the first and fired the second at the basket hoping for a Canterbury rebound that didn’t happen, giving MIA a heart-stomping 64-62 win.

Canterbury’s Edward Zurrita who seemed unstoppable, tallied 25, while Bryson Royal added 14. But in the fourth quarter, the Rays shut down Zurrita, scoring only four points and Royal none. 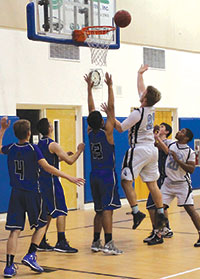 MIA’s Tyler Gresham made a key rebound then scored in a wild finish, giving the Rays a 64-62 win over Canterbury. PHOTOS BY ROGER LALONDE

When Stretton stood at the line for his foul shots that would give MIA its first and only lead, Stretton said, “I knew I had to make them. This is my senior year and that was what I was supposed to do.”

Coach Roger Raymond complimented the team after the win.

“I admit I was wondering with five minutes to go what to try to get back into the game,” he said. “You stepped up the intensity and won yourself a ballgame.”

In the late going, Gresham, Fowler, Patrick Michel and Stretton controlled the boards. Gresham finished with 10 rebounds, Michel, Stretton and Folwer six each.

The win moved the team record to 3-3 with two more tough games- against Community School on December 8 and St. John Neumann on December 9. For results of these two games, see the next issue of Coastal Breeze News.