The Quest for the Marco Green Diamond Ring 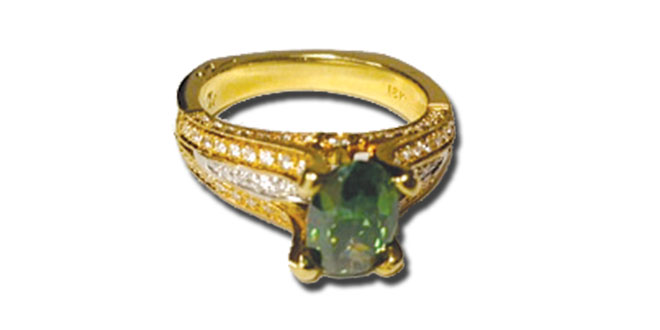 Want to have some fun and intrigue? While experiencing a rare idle moment, I came up with the idea of why not give something valuable away for free to generate (instigate) some controversy, get people talking, and who knows, I’ll also get some new faces and former faces I have not seen in the shop for a while.

My staff, which includes my wife and shop dog, Toby, finally decided my cheese had totally slipped off my cracker, to give away a $10,000, 18-karat gold, 1.43-carat oval green diamond ring for free!

I decided to bounce the quest thing off the wall, and while talking to my friend Valerie — who happens to be the publisher of this fine community newspaper — she thought my request for an island quest hunt would be a great idea!

Funny thing, though, apparently in the state of Florida one cannot just have a contest and give something valuable away (such as a 1.43-carat green diamond ring). The original plan was to award the treasure of the quest on this coming St. Patrick’s, but due to purchasing a permit and waiting for permission, I was at the mercy of the state’s approval of my insane idea.

And for those reasons I have been forced to postpone the drawing to April 11, which is fine for it will give anyone out there who is interested in joining the quest more time to solve the riddles and limericks. More folks will have a chance to win the prize: the green diamond ring.

The whole gist of this quest is quite simple, but not really. First of all, participants will actually have to get off their couch and physically arrive in person at my humble establishment — The Harbor Goldsmith of Marco Island — located in the Island Plaza right between Beall’s outlet and CVS Pharmacy.

Once there, you can request a numbered and certified chart (map), and who knows, you might accidentally buy a nice piece of jewelry? Rules and regulations to the quest will be included with the chart.

The final result of your quest — the green diamond ring — is on display in my showcase window. It is up to you to solve the correct five numerical course coordinates by following the clues that will lead you all over the island and could include hunting for numbers in Goodland.

Now the hard part. You didn’t think I was going to give away a $10,000 ring away without a challenge, did you? The clues to the five correct numbers will include puzzles or limericks that will only be found in this award-winning newspaper, Coastal Breeze News, and even tidbits of clues in this column you are presently reading.

Bottom line: Figure out the five correct numbers in their proper order. Write them down on your chart, and bring it back to me or my staff before 5:30 PM, April 10, for the final drawing at 3 PM on April 11.

All returned, completed charts must be numbered, and have the authentic Harbor Goldsmith certified seal to qualify. Any copies or counterfeit charts will be immediately disqualified, meaning the bearer is not eligible for the contest, and the non-qualifying document will be destroyed. The perpetrator could risk being keel hauled.

A riddle for solving the first coordinate number on your chart:

Many Island feral felines roam at will,
Climbing trees and structures with utmost skill,
While the humble human roams the earth, only one lifetime they’ll see
Whilst our felines supposedly live lives three fold times three.
Good luck and happy hunting!