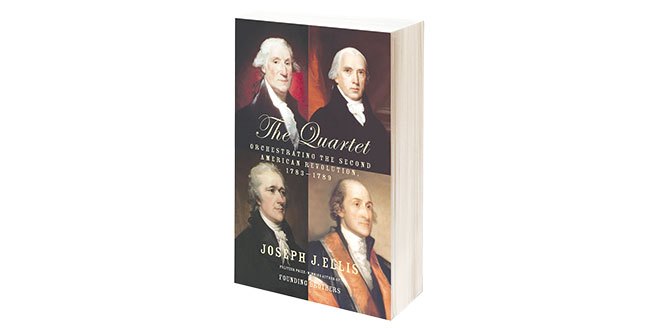 Turns out Lincoln was wrong when he stated, “Four score and seven years ago, our fathers brought forth upon this continent a new Nation” at that new Gettysburg military cemetery dedication in 1863. According to Joseph J. Ellis, 1776 marked 13 independent colonies declaring their intent to free themselves from the British Empire. After doing so, 1783 saw 13 new countries floundering in their postwar status, still suspicious of centralized authority, still identifying themselves with their local communities and region. One thing they all did have in common was disdain for the prospect of establishing a national government. They had just rid themselves of one tyrant and were not eager to embrace another. It actually took a second revolution to form the new nation, a United States.

Ellis argues that it was Alexander Hamilton, John Jay, James Madison and George Washington who forged the United States of America by force of their prestige, personality, political power, planning and preparation. Each of the four had extensive experience with the perils of government under the Confederation Congress, which was essentially impotent. Most of us know of Washington’s desperate situation as commander of the Continental Army, when his persistent pleas for supplies and recruits were unfulfilled. We all learned about Valley Forge as school children. Hamilton was Washington’s aide, and he too recognized that the colonists had won the war in spite of the Confederation Congress and that a stronger union was essential to the survival of all. Jay and Madison worked within the Confederation Congress and found its continued existence after the war untenable. All four saw that those who sought reform of the Articles under which the congress operated did not go far enough. Indeed, a new governmental framework must be developed.

The conviction of all four men was expressed in Jay’s words in a letter to John Lovell, 1785: “It is my first wish to see the United States assume and merit the character of one great nation, whose territory is divided into different states merely for more convenient government, and the more easy and prompt administration of justice, just as our several States are divided into countries (sic) and townships for like purposes. Until this be done, the chain which holds us together will be too feeble to bear much opposition or exertion and we shall be daily mortified by seeing the links of it give way.”

The new America would need the power of taxation in order to rid itself of stifling debt and build a national economy from the shambles created by government under the Articles. Indeed, the fledgling USA had massive problems on all fronts. It needed a strong defense, as British soldiers were encamped along the southern Canadian border, in violation of the Treaty of Paris. Ostensibly they were ready to invade their former colonies if the State of New York did not desist from confiscating the estates of former Loyalists, which was also a violation of the Treaty of Paris. Trade among the 13 states was prohibitively expensive due to all the fees and taxes imposed by each entity. Shipping goods down a river entailed paying taxes at multiple state and

local points. Still, a call in the Confederation Congress to address commercial reform (the Annapolis Convention) for the new United States failed to draw a quorum.

Undeterred, Hamilton called for a meeting in Philadelphia in May 1787 to address all the most salient issues necessary to give the federal government all the necessary power to form a true union. According to Ellis, “It was as if a prizefighter, having just been knocked out by a journeyman boxer, declared his intention to challenge the heavyweight champion of the world. Given the overwhelming indifference that had suffocated all previous attempts at comprehensive reform of the Articles, no one with any semblance of sanity could possibly believe that Hamilton’s proposal enjoyed even the slightest chance of success.”

How lucky for us that The Quartet and their ilk believed in their vision of what could and simply MUST be.

Madison was the pollster of the time, whose canvassing in the Confederation Congress revealed that those opposed to reform of the Articles would not attend the Philadelphia Convention and that Rhode Island would not participate. This was a good thing, leaving only moderates and radicals to draw up the new constitution. He prepared to defend the need for a republic, not a confederacy, including drawing up a list of failures that occurred under the Articles. He also wrote the Virginia Plan, a 15-point plan for creating a government with three branches, judiciary, executive and bicameral legislature. This plan was the result of the Virginia delegates, including George Washington, arriving in Philadelphia early and spending eight days together planning how to set the agenda for the convention. A preconvention convention as it were.

The Philadelphia Convention was contentious, but eventually 39 of the 55 men who variously attended the sessions ultimately signed the Constitution of the United States on September 17, 1787.

The next chapter, ratification, was as tumultuous as the conception of the document and was not completed until Rhode Island ratified in May 1790. Per Ellis, “…the ratification debate in each state was driven by local and state-based concerns rather than by the larger question of confederation or nation…in large part because the vast majority of delegates did not know how to think nationally, since nothing in their experience had prepared them to do so…the net result was a twelve-ring circus – with Rhode Island remaining an outlier – in which each state convention became a separate arena filled with performers playing to local constituencies.”

“The Quartet” is a wonderful read. Ellis’ luminous language is an absolute delight. He has a gift for bringing these revered historical figures to life, fleshing out their humanity. Although superbly researched history, it reads like a novel. The appendices include the Articles of Confederation and the U.S. Constitution, including the Bill of Rights.

Rating: 4.75. Available everywhere including Collier County Public Libraries, and our local public library, independent bookstores and all the usual vendors. Consider this book as a gift for any history or politics buff you may have in your life, or just any proud American citizen you may know.

Happy Constitution Day September 17, 2015! It is also Citizenship Day. A fun suggestion for you is to take a 2-minute quiz to see which founder you are most like. www.constitutioncenter.org/foundersquiz