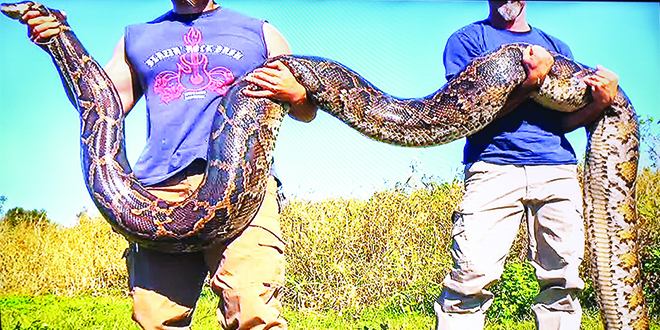 Python hunters with a big catch.

There have been numerous reports of sightings of Burmese pythons, and the efforts to eradicate them from the Everglades has been fierce. Professional snake hunters have even been hired to join in the hunt.

Last year the 2016 Python Challenge, presented by the Florida Fish and Wildlife Conservation, resulted in the removal of 106 Burmese pythons from the Everglades, thanks to trained volunteers who participated in the competition.

Recently, the Naples Zoo hosted “Pythons & Florida,” which offered attendees a close up look at the python and the many challenges our area faces in dealing with this invasive species.

Photos by Frank Steiger Photography | The python exhibit at the Naples Zoo offered a comfortable way to get an up-close look.

The presentation, in the Safari Canyon open-air theater, was given by the Naples Zoo Director of Conservation Tim L. Tetzlaff and Ian Bartoszek, biologist at the Conservancy of Southwest Florida. Bartoszek also serves as Invasive Animal Chair of the Southwest Florida Cooperative Invasive Species Management Area. Visitors were given an opportunity to ask questions following the presentation.

The first wild Burmese python in Florida was documented in 1979. In the past decade, their numbers have skyrocketed. This has resulted in a negative impact on our native wildlife populations. Pythons prey on a variety of mammals, birds, reptiles and fish. The Burmese python, one of the largest snakes in the world, has been known to also prey on alligators. They pose a hazard to humans and their pets.

For three years, Bartoszek has researched the pythons of Collier County, offering him special insight on the possible ways to deal with this growing problem. The Naples Zoo has been one of the funders of this important research.

What do you do if you see a python in the wild? The Florida Fish and Wildlife Conservation recommends that you take a picture of the python, note your location and report the sighting by calling 1-888-Ive-Got1 (888-483-4681) or online at IveGot1.org. More information can be found at MyFWC.com/nonnatives.

For more information about programs at the Naples Zoo, or to plan your visit, go to NaplesZoo.org.