The Price Of Valor: The Life of Audie Murphy, America’s Most Decorated Hero of World War II 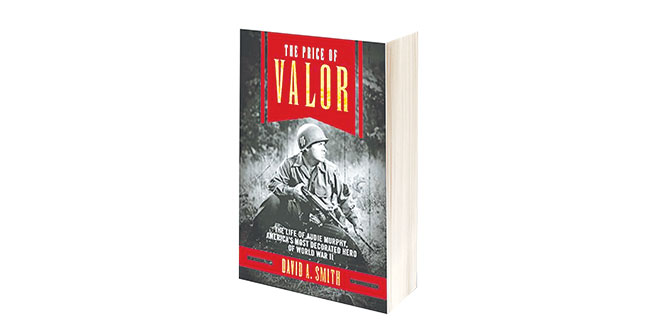 By David A. Smith

“After the war, they took Army dogs and rehabilitated them for civilian life. But they turned soldiers into civilians immediately and let ‘em sink or swim.” – Attributed to Audie L. Murphy

According to Army records, during the 20 months he served in the European combat theater, Audie L. Murphy was responsible for the elimination of at least 240 enemy soldiers, thus saving an untold number of American lives. He was wounded seriously enough to be hospitalized three times. In return, he received 33 decorations from the United States of America, France and Belgium. Posthumously, the State of Texas granted a special decoration in 2013. Those 33 decorations include the Congressional Medal of Honor. He fought his way from Tunisia to Central Europe via Sicily and Anzio.

He was 17 to 19 years old when he earned those awards. Not the only one to do so, he falsified his birth year to enlist in the military in 1942. His grave marker at Arlington National Cemetery reflects the false birth year of 1924 because that is what the enlistment record indicates. His actual birthdate was June 20, 1925.

In 1941, Audie’s father was long gone, having deserted the family a final time the year before. His mother Josie passed away suddenly a month before his 16th birthday. His older sister Corinne, his second mother, was now married with her own family. Josie instructed them to send their three younger siblings to a local orphans home. Heartbroken, Audie did as his mother asked, but vowed he would put his family back together as soon as possible.

Besides being the year he lost his beloved mother, 1941 was pivotal for Audie in other ways. Lost after his mother’s death and his younger siblings placement in a children’s home, Audie lost himself in work, model airplane building, and “going to the picture show.” There were Westerns aplenty and he enjoyed them, but Gary Cooper’s new movie that year, Sergeant York captured Audie’s heart and mind. York was a real-life hero from the First World War, a poor country boy like Audie, a crack shot with a rifle who could track any living creature for miles. Audie saw the movie twice, and affirmed his own resolve to join the Marines. Maybe his skills would be useful in the war in Europe. Less than two months later, Pearl Harbor was attacked.

At 5 feet 5 inches and 112 pounds, the Marines felt Audie did not meet the criteria to become a sniper. They rejected him several times from December 1941 to May 1942 (their loss as it turns out). Finally, Audie gave up on the Marines and redirected his attention to the Army. He and Corinne went to a notary in their home county of Collin to swear he was born June 20, 1924, and that he had no dependents who needed his financial support. Audie enlisted on June 20, 1942, and reported for training near Fort Worth 10 days later. Because of his small size, he was encouraged to become a cook or some such. He stuck with his determination to become an infantryman. Near the end of training, his commanders were uncertain about sending such a small baby-faced soldier overseas and were intending to find stateside duty for him. He fought for the right to fight and not be commandeered into supply or food service. As a child of the Depression, Audie had been fighting just for survival his entire life, so fighting for his goal of being an infantryman was second nature. But he did look like he belonged in a Boy Scout uniform, not in Army khakis.

February 1943, Audie stepped onto a troop transport for the 11-day trip to Casablanca. Twenty months later, Private Audie Murphy would be commissioned a second lieutenant and recommended for a Congressional Medal of Honor. In Audie’s own words, “If I learned one valuable thing during my early combat days, it was audacity, which is often mistaken for courage or foolishness. It is neither. Audacity is a tactical weapon…throw the enemy off balance and confuse him…If you have no defense, attack.”

He was audacious and he did attack. David A. Smith details those twenty months of Audie’s combat experience in a style that rivets the reader’s attention. Smith uses many primary sources, from Audie’s own letters, speeches and conversations, to interviews with his friends, coworkers and World War II veterans, and military commendations. As I was reading Audie’s exploits, I thought it was a good thing that so many people witnessed his actions, otherwise no one would have believed they happened. To say he had the respect of the men he served with is a gross understatement. As audacious as he was on the battlefield, out of combat, he was his humble unassuming self. One fellow officer is said to have told someone, “Don’t let that baby face fool you, that’s the toughest soldier in the Third Division.”

As you might surmise from the title, “The Price of Valor,” Smith is making a case for Audie being a case study for battle fatigue as it was called in that era, or what we now know as PTSD (post-traumatic stress disorder). He does a convincing job. At the beginning of the war, Audie, most soldiers and even most physicians and psychiatrists, thought battle fatigue was due to a weakness in character or temperament in a certain percentage of those in 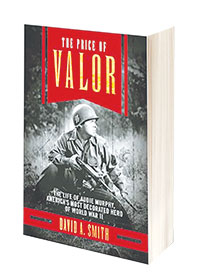 combat. But during the war, attitudes began to change among the commanding officers, as well as medical personnel. They came to recognize that any soldier was vulnerable to the condition, and that it was external factors not personal deficiency that instigated the PTSD. One commander was even savvy enough to rotate his troops from the front line back for 3-day rest periods.

Audie helped lift the onus of PTSD, and mental illness in general, in the mid-1960s. After his own realization of his addiction to sleeping pills, prescribed by his physician, he rented a hotel room and spent five days withdrawing from them. He never took another pill after that. In order to draw attention to the needs of the Korean War and Vietnam War veterans, he did speak out publicly about the US government’s need to take better care of veterans, and the need to give them benefits for the treatment of PTSD, and other issues. It is now 50 years later – how are we doing with that?

After the war and all the hoopla associated with his homecoming as a Medal of Honor winner, Audie goes to Hollywood via invitation of James Cagney. He did not particularly like actors or pretending, but on the other hand, he needed money. Following through on his self-promise to liberate his three siblings from the orphanage, he used a 1,500 dollar award given to him to buy Corinne a house big enough for her own family plus their three younger siblings. When he boarded that plane, ticket paid for by Cagney, Audie had about 10 dollars to his name. Cagney was good to him, sensed he was worn out and gave Audie a place to live, and horses to ride. When Audie was rested, Cagney sent him to acting lessons.

While in Hollywood, Audie would spend his break time with the crew, mostly gambling. Smith’s theory is that the gambling was Audie’s attempt to recapture the excitement of early combat, to feel “up” about something. Audie himself said he had lost his sense of excitement during the war, and just could not get himself worked up about anything. He never really fit in with Hollywood, at least not the actors and directors, but he did make friends with the stuntmen, grips, extras, etc. At his memorial service in 1971, no actors were there except his first ex-wife Wanda Hendrix and Ann Blyth, but hundreds of stuntmen, extras and crew members paid their respects.

Audie bred horses, was a pilot and owned his own plane. One thing I did not know about him prior to reading this book is that he wrote the lyrics, along with Scott Turner, to about 18 songs and composed a couple himself. Some were popular hits, including “Shutters and Boards” which was recorded by many singers including Dean Martin and Charley Pride. These are on You Tube. Who knew Dino could sing Country?

He made a lot of money, but he gambled a lot of it away. Towards the end of his life, he was under financial duress. He owed the IRS, had lost most of his property, and was looking for way to start again. That is how he came to be in that aircraft when it hit the side of a mountain near Roanoke, Virginia on May 28, 1971. He was on a business trip to check out the possibility of being spokesman for a prefabricated building manufacturer. He was on his way to the factory when the pilot made the fatal error of turning north instead of south to avoid a storm. The plane disintegrated on impact. The bodies of the six men were not found for three days – on Memorial Day, May 31, 1971. The three major TV networks gave Audie’s death a combined total of 90 seconds of airtime.

Audie L. Murphy left a wife and two teenaged sons, as well as some loving siblings back home in Texas. He also left millions of Second World War veterans who respected and admired him. He is buried near the Tomb of the Unknown Soldiers in Arlington National Cemetery. His gravesite is the second most visited in the cemetery (JFK’s is number one). They built a little walkway to his resting place so his visitors wouldn’t have to walk on the grass. As the Second World War generation leaves us, one wonders if Audie Murphy’s legacy will fade away as well. His is such a quintessential American story, child of the Depression, dirt poor, picking cotton as a toddler, leaving school with a fifth grade education to find work to feed his mother and siblings, hunting rabbits and squirrels with stones, too poor to own a gun and bullets. Yet never expecting anything but the opportunity to work to better himself, and never letting go of that determination to do so.

The Price of Valor is available in e-format and hardcover at the publisher, Regnery History, as well as the major national book vendors. Collier County Public Library does not have it. David A. Smith is a professor of American History at Baylor University. Rating: 4.0/5.0.