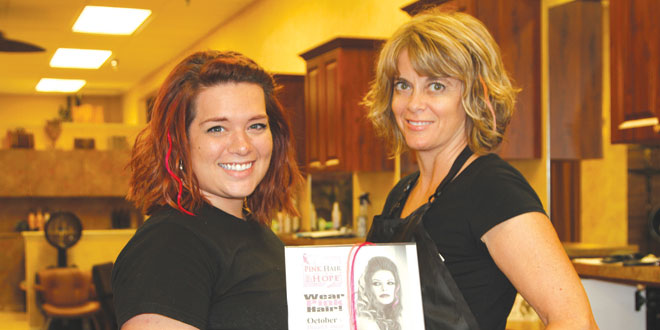 Pink is the new blonde.

This is the first year the salon, owned by Tom Brummitt, is participating in Pink Hair for Hope, a “grassroots effort that blossomed into a beauty movement.” Coordinated by hair extension company SO.CAP. USA in 2006, the idea has quickly gathered steam throughout salons across the entire country.

In fact, Diane Schreiner, a hair designer and nail tech at Salon and Spa Botanica, brought the idea down with her when she moved to Marco Island a year ago. In 2007, while working at a salon in Algonquin, Illinois, Diane heard of the Pink Hair for Hope and wanted to get involved. The salon began offering the pink hair extensions, and within the month they raised $8,500; a total of 850 extensions.

“It was crazy but it was fun,” she says of the times whole volleyball teams or cheerleading squads would come in to get the hot pink extension at once. “Sometimes we would have 25 girls walk in at once, but it was worth the hard work. We were the only salon in the area at the time that was doing this, so it got pretty busy.” As the years went on, the salon continued to offer the pink extensions in October, and many other salons followed suit.

Diane has been a major supporter of the Pink Hair for Hope movement not only because it is for a good cause, but also beause her mother was diagnosed with breast cancer in 2004. “She had mammograms 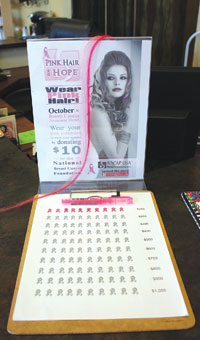 Every customer that buys an extension gets to fill in a pink ribbon at the front counter, showing the tally of the money raised. PHOTOS BY VAL SIMON

every year, and they never saw anything… She kept having this pain in all different areas like her body was telling her something was wrong, and her doctor finally said they had to do something about it.” An ultrasound ended up picking up the lump, and her mother was diagnosed with Stage 4 breast cancer; it had also moved into her lymph nodes.

Her mother received aggressive radiation and chemotherapy treatments that took a lot of her. “It took a long time for her to recover,” adds Diane as she continues on to proudly state that her mother has been in remission ever since.

And so, Diane approached Tom to see if he was interested in taking part, “and he said why not. Let’s try it.” The salon has been carrying the extensions since mid-September and has already raised over $100.

“There are four colors, but we offer two, fuscia and dark pink,” adds Diane. “They are curlable and you can use a flat iron on them, too. They can last for months and are really easy to remove.” The salon also offers free removal of the extension, which is adhered with a keratin bond.

The ladies in the salon are sporting the pink, and Diane has even adhered extensions to a number of brave men. “We have actually had two people donate the money and not get the extension.” People have also donated money for an extension for someone else. “The best part is,” adds Diane, “that all $10 goes to the National Breast Cancer Foundation.”

As they say in October, “Think Pink!” Why not make the statement with your hair. Call Salon and Spa Botanica to make your appointment at 239-394-6633. The salon is located in the Shops of Marco, 141 South Barfield Drive.

To learn more about Pink Hair for Hope, visit www.pinkhairforhope.org.