THE PINES OF MARCO ISLAND, Not traditional christmas trees 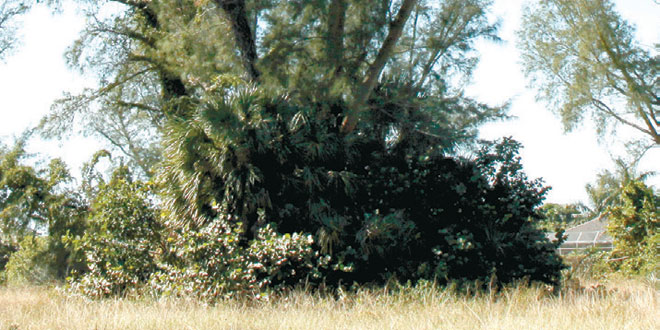 Did you attend the City’s Christmas Tree Lighting last weekend? Have you gone by Veterans’ Park to see this beautifully trimmed tree? If not yet, take a look and Merry Christmas! On our semi-tropical barrier island, there are predominantly three species of pine-like trees. None would make for a hearty Christmas tree, but all have a value in our community. So, put up your artificial tree or get one from a big tent; the pines on Marco Island are not your traditional Christmas trees.

The Southern Slash Pine is a native tree in Florida and important ecologically, commercially and aesthetically. Growing from 80 to 115 feet and having five to eleven inch needles and a pine cone that can be five to eight inches, it is one of the two species of slash pine in the state of Florida. The larger species of the Slash Pine, (Pinus elliottii) is found north of the Everglades in the coastal plains of north and central Florida. The smaller species is the Southern Slash Pine (Pinus elliottii densa), and was historically tapped in Florida for the naval stores industry for the saps used to make turpentine and rosins. Not much of that is done now; it is, however, used for lumber and pulp – a dense wood – and when planted and harvested can produce two cords of wood per acre. These pines are found naturally in wet flatwoods and swamp lands and edges of ponds and lakes. It is called “slash,” as its habitat typically breaks up or “slashes” other habitats such as cypress swamps and wetlands and, in south Florida, typically has Saw Palmetto and Sabal Palm growing as understory and compatible species. It is considered a fire-dependent species, having thick fire-resistant bark. Other hardwoods will not survive a fire, while Slash Pine will not only survive but thrive. The Slash Pine uses periodic fires to keep the forest free of competitive trees and open for its own seedlings.

On Marco Island, this native pine is found in the more natural, undisturbed inland, “upland” areas that were not 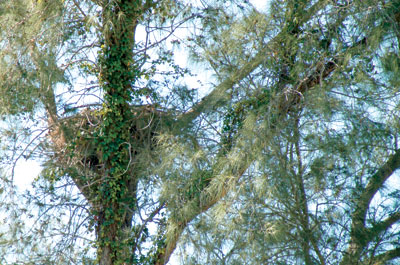 dredged and filled when creating a canal community. Slash Pines can be seen in and around the Island Country Club and its neighborhood area, near the YMCA and its neighborhood area, down San Marco Drive and Bald Eagle Drive and parts of Hideaway Beach. Throughout south Florida, the Southern Slash Pine is ecologically important as food sources for grey and fox squirrels as well as turkeys. On Marco Island, they are also important to cavity nesting birds, like Eastern Screech Owls and Red Cockaded Woodpeckers. Nesting birds, especially the American Bald Eagle, have found Southern Slash Pine stable homes for their large, heavy nests here on Marco Island and in Corkscrew Sanctuary in Naples. There is a long history of Bald Eagles using Slash Pines as nest trees on Marco Island near the YMCA and for years at the Island Golf Club on the golf course. A pair is nesting in one such pine there now.

The Norfolk Island Pine (Araucaria heterophylla) is not technically a pine, but an evergreen. It is a native of Norfolk Island in the South Pacific, east of Australia. Popular in tropical climates, it is a houseplant gone wild! Cute, whimsical, potted Norfolk Pines are frequently given as gifts at Christmas with bows and tiny ornaments adorning its symmetrical branches. Once out of the pot, it can grow up to 200 feet in South Florida, often towering over most houses and small condominiums. It is a hardy tree as it can grow in poor soils, wet or dry. It does not do well in strong winds, such as hurricanes. Typically the first tree to blow over or break in a storm, its tall trunk will snap, sometimes causing the top to act like a spear, slicing through roofs, lanais and block roadways. The broken top will grow back, most likely with many suckers; some trees on Marco Island have multi-trunk tops due to past storms. Being the tallest structure in most neighborhoods in Marco Island, American Osprey and Great Horned Owls have nested in these trees. Though great nesting trees, caution should be taken if this species is considered in 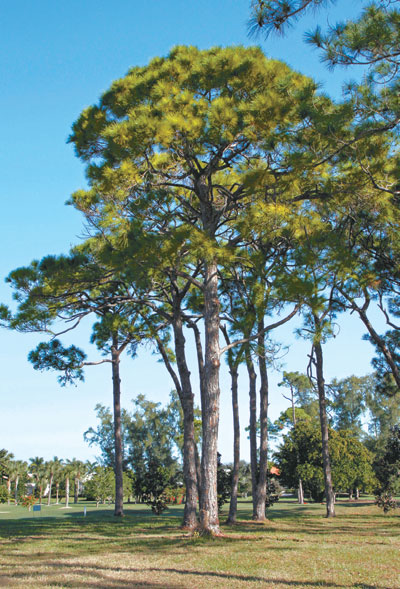 a landscape. The height should be controlled as it grows and if an older tree has an unbalanced or multiple trunk top or the tree leans in any direction, removal should be considered for storm protection.

The third most common “pine” seen around Marco Island is one of the most controversial. Listed as one of the most invasive, exotic tree species of Florida, it is the Australian Pine (Casuarina sp.). Interestingly, it is called a pine, and, yes, it is a native species of Australia, but it is not a pine or conifer species. This tree is actually a flowering tree with separate male and female flowers; what looks like pine needles, are actually green “twiglets” made of tight circles of tiny leaves. The tree was brought to Florida to soak up the “swamp,” “hold” beaches, create wind breaks and perhaps planted for beauty and shade. A very prolific tree, it seeds quickly, with saplings growing five feet or more per year, impacting natural ecosystems by creating mono-cultures (single species in a habitat) due to the herbicide chemical it emits that kills all other plants that grow in its vicinity. The root systems are not deep, but shallow and spread out. In hurricanes they topple over easily wreaking havoc to neighborhoods in a storm’s path. Most native species of trees can sustain a storm event; they bend easily, have deep roots, or the ability to drop branches when needed. Not so for the exotic Australian Pine. In 1992, Hurricane Andrew felled most of the pines in the YMCA area, an area once known as “the pines” to long-time Marco Islanders. Roofs, lanais and yards had major damage. The few Australian Pines that were still standing in 2005 in this area were completely down after Hurricane Wilma blew by, taking a few roofs and lanais with them again.

These exotics were once thought to “hold” beaches, so many were planted then self-seeded in the coastal dunes. It was found that the shallow, spreading root systems aggravate erosion, especially in storm events and prevent sea turtles from digging for nesting in the dune area. The shade caused by 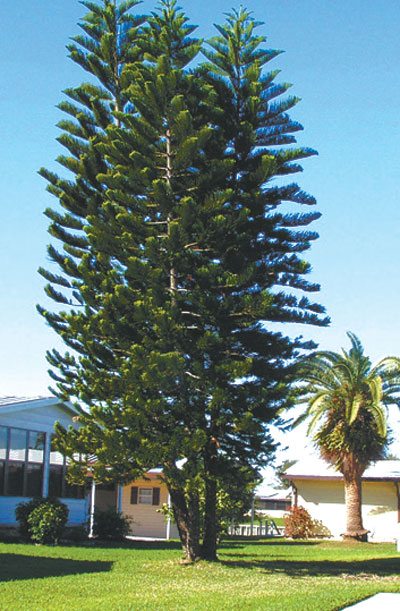 them also changed the male to female ratio of sea turtle hatchlings. Beaches were shaded most of the day, keeping nests at cooler temperatures, causing longer incubation periods. Statically, more male sea turtle hatchlings are produced from each nest when this occurs. Temperature of a sea turtle nest, as with most reptiles, during incubation dictates the sex of the offspring. The Florida Department of Environmental Protection actively removes Australian Pines from dune and other ecologically important systems due to these scientific studies.

On Sanibel Island, after Hurricane Charlie so many trees, both natives and Australian Pines went down, the few standing pines that were subject to removal by the State, were saved, and protected by a residential group that formed and was named: Save the Pines (www.australianpines.org). They made the case that the trees that made it through the storm are used by diverse wildlife and provide the storm-devastated island with shade, tree canopy and character. As Sanibel recovered from the busy hurricane season, the standing Australian Pines were the building blocks for the landscape.

On Marco Island, there are about eleven acres of land, now known as the Marco Eagle Sanctuary Foundation (MESF, www.marcoeaglesanctuaryfoundation. com), that also hosts Australian Pines. The predominant species of trees in this area were also protected by a residential group that formed to ensure conservation of the nesting Bald Eagles on site.

Protecting the birds, in turn protects the trees. Since 2003, American Bald Eagles have built a huge nest in an Australian Pine on this site. Bald Eagles use the same nest tree and perch trees throughout their lives. The federal and state conservation and protection rules prohibit the removal of the nest tree and vital perch trees that are in the vicinity of the nest tree, for up to five years of active nesting. The Bald Eagle pair has been using the MESF site for nine consecutive years to produce an average of two fledglings per year.

So, as you travel around the island this time of year, you will see wonderful holiday trimmings, many traditional Christmas trees, but also a few other “pine” trees standing tall and strong, supporting the Island’s wildlife and beauty.