“The Outsider” impossible to put down! 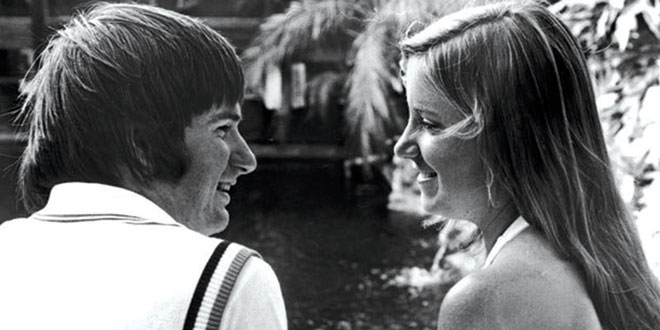 The moment I heard that Jimmy Connors’ book was coming out I knew I had to get it from www.audible.com for our long ride to Edgartown, Massachusetts. When I researched the “The Outsider,” I was jubilant to learn the audio book was almost 12 hours long; simply stated, Leslie and I could not only drive through the entire state of Florida but we could continue listening through Georgia, South Carolina and North Carolina! Most well traveled people yearn to be well entertained as they drive long distances on the interstate weaving through endless traffic. Due to the good ole Nuveen (Senior Tennis Tour orchestrated by Jimmy Connors and his team) this writer, performing as a local tennis professional and as a journalist, has spent considerable time with Mr. Connors.

Our first meeting lasted almost six consecutive hours as I was running the Prince free clinic for kids and Jimmy literally blew me away when he stayed on-court for the entire time. “Jimmy, I’m feeling pressure from others to wrap this thing up.” He quickly responded, “I’m not finishing until I hit a ball to every single kid out here!” Truth be told, we had at least 300 kids lined up and ready to hit with Jimmy and hear a quick critique. The next day we had the opportunity to casually chat about the event, the overall senior tour and his feelings about fatherhood and other relevant subjects.

Quite frankly, I was literally blown away. We were new acquaintances and he revealed several intimate stories of his life and his feelings about traveling, his opinions about Bjorn Borg and John McEnroe. To say it was “pretty cool,” is only scratching the surface since I had always been a huge fan of his tennis and his ability to entertain on the court. His new book, “The Outsider,” is alluring, mesmerizing, thrilling and enthralling because he is so introspective about his life and his travels throughout the world.

For example, he described in great detail his gambling addiction and the story about his match against Martina Navratilova. This match was like no other. The promoters had an interesting handicap to make the match more attractive to the viewers – the court was widened on Jimmy’s side so Martina could hit the ball half-way into the doubles alley. The other far less important chip Jimmy had to forfeit was one serve only. If Jimmy missed his first serve, he lost the point. Experienced tennis fans are well aware this is not a big deal as Jimmy usually just spun in his serve and was never a big weapon. Before the match, Jimmy nonchalantly bet one million dollars on himself. Oh, in Connor’s fashion, he not only had to beat Martina but he had to limit her to only 8 games or he would lose the bet! (He never discussed this huge bet with his wife, Patty!) 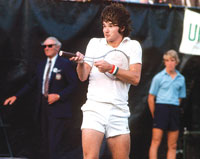 Having a bit of fun on the court. Submitted Photos

the first set, play had to be halted as Jimmy’s old buddy, the legendary Bobby Riggs (one of the television commentators) had passed out and everyone was concerned he had a heart attack. As Jimmy described in his memoir, apparently Bobby had also placed a considerable bet and was having a panic attack. Connors stormed back and won the match 7-5, 6-2 and a nice check was prepared for him as he left Las Vegas.

Before “The Outsider” was released there was a big controversy about a portion of the journal which contained intimate details about his relationship with tennis star and legend, Chris Evert. At one time, Jimmy and Chris were engaged to be married and there are particular aspects of their life that needed to be protected and Jimmy violated her privacy. Once Chris heard about Connor’s new book, she quickly responded “I am extremely disappointed that he used the book to misrepresent a private matter that took place 40 years ago and made it public, without my knowledge. I hope everyone can understand that I have no further comment.”

At no time did Jimmy ever hold back in his new book. He was open about his infidelity in his marriage and offered insightful dialogue about the damage to his kids, in particular Brett. “As I was preparing to serve, I could not stop bouncing the ball,” Jimmy’s well described depiction of his battles with OCD (Obsessive Compulsive Disorder) I personally first observed one of his quirks, possibly a symptom of OCD, early in his career when he would walk between points to move to the baseline to serve. Without fail, he purposely stubs his toes with his shoes and continues to alter his front foot during his motion. Strangely enough, Andre Agassi used to have the same odd fixation when he walked near the baseline to serve.

Jimmy candidly opened up about Davis Cup coach, Arthur Ashe, McEnroe, Agassi and his personal favorite, Romanian Illie Nastase. He went into great detail and offered numerous judgments about each person. Not only is this a great read for tennis enthusiasts but it is an entertaining story for non-sports book-lovers who enjoy a well chronicled autobiography. Speaking of predictions, I’m rooting for Djokovic and Azarenka to win in Paris but realistically it is impossible to ignore both Nadal and Williams to capture another big Slam. Let me know how you feel about Connors’s book and your own predictions for the big event at Roland Garros.

Doug Browne has been a tennis journalist since 1992 and is the Director of Tennis at the beautiful Hideaway Beach Club on Marco Island as well as the prestigious Boathouse Field Club in Edgartown, Massachusetts. In 2010, Doug served as the Director of Tennis at the International Hall of Fame in Newport, Rhode Island. Doug and his wife, Leslie Browne continue to love to coach players of all ages and can be reached at dbrowne912@aol.com