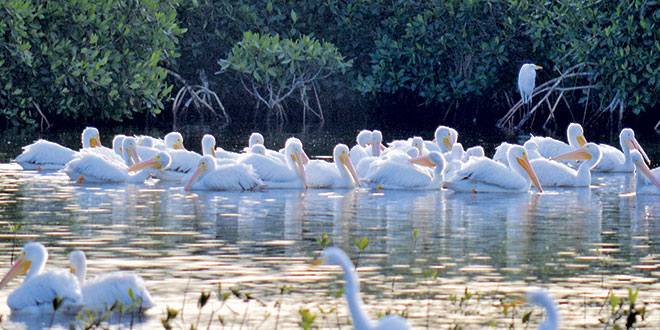 White pelicans are gregarious and will work together to gather fish.

It is estimated that humans have been in the Florida region for more than 14,000 years. Naples became a destination point just over 100 years ago and Marco Island was a mosquito-infested area until development escalated in the 1950s. Long before northern tourists began visiting our beaches to seek refuge from the winter cold there was a different type of “snowbird”…the white pelican.

This giant of the skies breeds primarily in the interior regions of North America and makes its way to Florida, Central America and South America for relief from the colder climate. They will winter on the Pacific coast and the Gulf of Mexico, along the Mississippi River and down to Panama. They have been observed as far south as Columbia and some also spend their winters here in Florida.

Their Latin name is Pelecanus erythrorhynchos, which literally translates as “red billed pelican.” The white pelican is very light colored with just a splash of black under the wings that is very visible during flight but no so much when they are on the ground. This bird is huge in several respects. It is one of the longest birds on this continent with a potential length up to six feet. The wingspan can approach 10 feet and

White pelicans are very large and grace Florida’s waters during fall and winter.

is the second largest wingspan of any North American bird behind the California condor.

Their orange, not quite red, bill is quite large with a length of nearly 16 inches. When in their migration areas this bill will usually be a duller color than when they mate in their northern habitat. The upper bill will be flat. However, during breeding season, in the spring months, the bill will become a brighter orange, as do the feet, the skin around the eyes and the iris. A protrusion will appear on the upper bill at this time also and is referred to as a “horn.” This will shed after the birds have mated and laid eggs. Of all the pelican species this is the only one to develop a horn.

Year-round residents and visitors to South Florida have witnessed the familiar sight of brown pelicans diving head first into area waters to catch their meals. White pelicans are quite different. They will actually work as a team in groups of about 12, herding fish toward a shoreline or shallow water by beating their wings and maintaining a set formation. Sometimes one group will actually direct fish to another waiting group and then, that group will return the favor. I recently witnessed about three-dozen 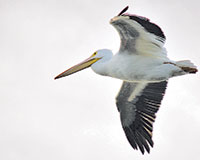 A juvenile white pelican in flight has not acquired all of its white feathers, but willdo so over time.

of these hunters corralling fish from deeper waters to a shallower area for easier feeding. They will eat about four pounds of fish each day.

Like all animals after an easier meal they will sometimes steal food from other birds, like gulls or cormorants. This is called “kleptoparasitism” and can be seen occasionally when bald eagles harass ospreys until that osprey drops its catch. Other birds will utilize the same technique as well.

These large pelicans will breed in colonies of several hundred pairs, but not here in Florida. Mating will take place once they have returned to their summer homes in Canada and our most northern states. The female will usually lay two or three eggs, and both parents will share the duty to incubate the eggs for about a month. After hatching, the young will stay in the nest for three to four weeks. When they leave the nest they will spend the next month with other youngsters in a creche (pod) and their immature feathers will appear. During this time the parents still care for the young until they have learned to fly.

In Florida there are several frequent locations to view these exquisite gliders. Here in South Florida they can be seen in Bradenton (Anna Maria Island), Sarasota

White pelicans feed in a marsh near Marco Island. PHOTOS BY BOB MCCONVILLE

In the immediate area they have been seen at Tigertail Beach, Hideaway Beach, the Marsh Trail, Cape Romano, Everglades City, Chokoloskee and even a rare visit near the Naples Pier.

The white pelicans will be here for a few more months, until Mother Nature sends a signal that the northern migration should begin. They have specific stops along the way and know exactly when to continue their journey. They will cover thousands of miles each year in their quest to assure that the next generation will thrive.

Catch a glimpse while you can. These original “snowbirds” are magnificent to view and should not be missed!

BIO: Bob is the owner of Stepping Stone Ecotours and a naturalist for a dolphin survey team on the Dolphin Explorer. He is a member of Florida SEE (Society for Ethical Ecotourism). Bob loves his wife very much!