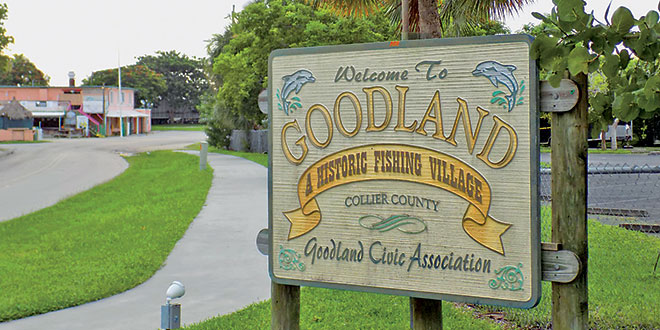 Photo by Barry GwinnThis is the fourth and last iteration of a welcoming sign coming in to Goodland. This one was done by Kevin Hauke and installed in 2000. The first one was installed by Art Calvert (advertising his local real estate brokerage) in 1978.

In the spring of 1945, when Art Calvert returned to the States from the South Pacific, his children didn’t recognize him. He had been taking Atabrine for his malaria, and it gave him a yellowish hue. He resettled the family in Miami Springs and resumed his electric supply business. He also got involved in politics and the newspaper business, chairing the Dade County Democratic Executive Committee, and publishing (and editing) the Dade Democrat. In 1961, after helping Doyle Conner to be elected as Florida’s Agriculture Commissioner, Art was appointed as Southern Regional Director of the Florida Department of Agriculture, where he served until his retirement in 1978.

In the mid-20th century, Miami was a magnet for those who shivered through Northeastern and Midwestern winters. It was a boomtown full of business opportunities, plus beaches and fishing. It seemed to have everything. Dade County was by far, the most populous county in Florida – just under 500,000 people lived there. (Florida’s total population was 2.7 million.) Directly across the peninsula was one of Florida’s smallest counties, Collier County, with only 6,488 souls. It was insignificant and a backwater in the scheme of things. Except, it had 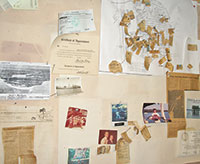 Art Calvert’s real estate office, March 2004. All clippings and pictures appear to be more than 30 years old. Most recent is Art’s Florida Real Estate License (top left), renewed on 2/26/04, less than two months before his death at age 90. He was indeed,Goodland’s oldest real estate broker.

some of the best fishing in Florida. On the east coast, it was common knowledge that the 10,000 Islands and adjoining Gulf of Mexico were teeming with fish. Now a new fishing village was being developed and settled – right smack in the middle of all this. A friend took Art over for a fishing trip in the late 1950s. By the 1960s, Goodland had been developed enough that it could accommodate increasing numbers of visitors. It had a trailer park, a motel, and a couple of restaurants. Ted Cursie, another Miami transplant, was about to start building model homes and offer building lots. “We were a fishing family,” Bev Boggs, Art’s youngest daughter told me, “And we fell in love with the sleepy fishing village of Goodland. The images of soaring eagles, nesting ospreys on channel markers, snook, captivating sunsets, spoonbills and the white unmarred beaches [of Marco Island] were calling to all of us.”

In 1961, Art found a three-room stilt house on the Marco River, which he was able to rent for $25 a month. It was located next to where the Old Marco Lodge now stands and dubbed, “The Fish House” by the Calvert

family. That the seven-member family was willing to be crammed into this lodging for a few months each year was evidence of their love for the Island. “There was no water back then,” said Bev, “The only water was a cistern on the property. If it didn’t rain, there was no water. We had to bring drinking water in large jugs from Miami. Showering was GI style – get wet, soap down, and a quick rinse.” In 1977, he built a larger home at 101 Coconut Ave. E. He and Dottie finally moved into it permanently in 1978. Beverly Calvert Boggs, Art’s youngest daughter, still lives there. She is the music director at the Goodland Baptist Church and plays the piano there on Sundays. She is also active in the Goodland Civic Association (GCA). The Calvert family continues to contribute.

The family can recount 28 different jobs that Art held during his lifetime. One of those jobs was selling real estate; another was editing newspapers. In 1978, there were a lot of vacant lots in Goodland. Art, sensing opportunity, got his real estate broker’s license and opened an office in the basement of his home. Never one to

do things half way, he promptly commissioned a sign to be posted at the entrance to Goodland (at Sunset Court) welcoming visitors and announcing that (at 65) he was “Goodland’s Oldest Real Estate Broker.” “I have views for you,” the sign said. The “Welcome to Goodland” sign of today, positioned in the same area, is eerily reminiscent of Calvert’s first “Welcome” sign. To further advertise his business, Art composed what he called an “Introduction to Goodland,” which was published in the Marco Islander, our local paper at the time. It was a clever, earthy appeal to those who wanted a simpler, less complicated way of life. Published in about 1978, it could easily be included in a promotional brochure today, nearly 40 years later. “Hell no, it ain’t cheap,” wrote Art, “It just looks that way. But if you’re looking for the best location in Florida for fishin’ and relaxin’…you’ve found it, right here in Goodland.” Advising prospective buyers that they better hurry, Art continued, “There ain’t much left to sell, and them that’s got it, don’t want to sell.” Suggesting that the obituaries might be the best way to find listings, Art went on, “The most 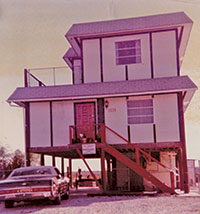 Art Calvert’s Real Estate Office at 101 Coconut Ave. E. Note sign on front steps.Office was in converted utility room under the steps. House was built in 1977, Art and Dottie moved in in 1978.

general way something becomes available here is when someone dies or gets run out of town.” “Most people like it here,” Art concluded, “and just want to stay and enjoy the ‘good life’ in this mixed up little village.”

After devoting a few paragraphs to the eclectic “mixed up” Goodland residents, Art felt constrained to deal with the no-see-ums and mosquitos in two lengthy paragraphs, intimating that living with them was a Goodlander’s badge of honor. Art ended his piece with a peroration that well could be our motto today, as we continue to welcome visitors and new residents in to our community. “It’s a Good Land,” Art said, “and they keep a comin’ down that twisted little road that leads in to town.” Yes they do Art. Thanks for that.

Art was a charter member of the Goodland Civic Association (GCA), incorporated in April 1978. Another of his incarnations was that of fireman. In the early 1980s, he along with other Goodland leaders wanted to bring a firehouse to Goodland. It was spearheaded by the recently formed GCA. The Marco Island Fire Control District agreed to raise money for the erection of a firehouse (They did raise $115,000), 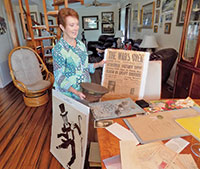 Photo by Barry GwinnBeverly Calvert Boggs at home in Goodland with some of her father’s memorabilia. Art Calvert saved almost everything and Bev has faithfully kept his collection. She is holding Art’s WWII warrant officer’s cap.

if the GCA would make a suitable building lot available. Thereafter the GCA raised $18,000 for purchase of the lot on which the Community Center stands today. Art Calvert was one of the main movers and shakers, giving both his time and money for this effort. His name, along with 18 others, is memorialized in a bronze plaque affixed to the front of the Community Center. The building didn’t last as a firehouse, but became instead, the home of the GCA, which has been meeting there for 30 years.

Perhaps Art’s greatest accomplishment was as the beloved patriarch of his family, which at the time of his death, consisted of his four children, five grandchildren and six great-grandchildren. They all adored him. Art died of cancer at the age of 90 on April 22, 2004, ten years to the day after Dottie died. Two months before his death, Art posted his final real estate license renewal to his office wall. It was dated February 26, 2004.