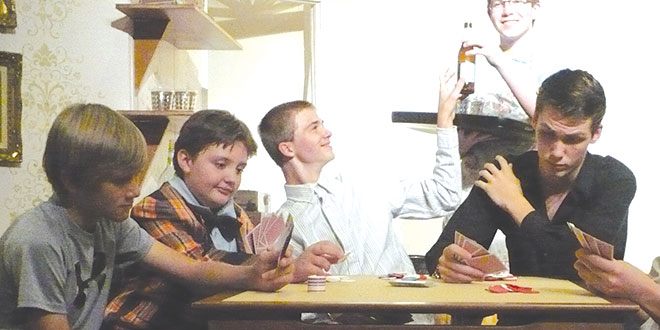 Forget everything you know about the classic 1965 Neil Simon Broadway play — and 1968 film and 1970s television show — “The Odd Couple,” and prepare to be dazzled by the Island Theater Company’s all-student performance of the play this weekend at the Rose History Auditorium on Marco Island.

Originally scheduled for April, this kick-off-your-summer-right production is directed by Gina Sisbarro, sponsored by Jump Hair & Nails and hosted by the Marco Island Historical Society. According to Sisbarro, this is the full-version production of “The Odd Couple.” “We hope the island community will come out and support the kids,” she says. “There aren’t that many shows that the whole family can enjoy together. This show is great fun and appropriate for all audiences. The cost was kept low so families can expose their children to live theater right here on Marco Island.”

Cooper Ussery as FelixUngar looks none-toopleased with a peck on the cheek from his slovenly roommate Oscar Madison, played by Luke Sheldon.

classic comedy is a tale of horribly mismatched roommates: the neurotic neat-freak Felix Ungar and the carefree, constantly disheveled Oscar Madison. Felix is a newswriter by trade, who is forced to move in with Oscar — a divorced sportswriter — after his wife throws him out. From the beginning, it is obvious the two men couldn’t be more different. Felix is a fastidious hypochondriac, while Oscar’s apartment could be the site of the world’s largest Petrie dish.

The play opens as a group of “the guys” — Murray, Speed, Vinnie and Roy — have assembled for a card game at Oscar’s apartment. Late to arrive is Felix, none-too-tense, depressed and quick to point out everyone’s shortcomings. As the action unfolds, Oscar soon regrets his decision to room with Felix. He throws Felix out, only to realize that Felix isn’t so bad after all.

Marco Island theater-goers will be quick to recognize the faces in the all-student cast. Fresh from their lead holiday performances in “A Christmas Story,” Cooper Ussery takes on the role of 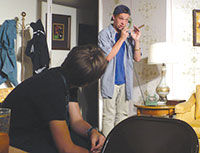 Luke Sheldon takes on the persona of Oscar Madison.

Tickets for this family production can be purchased at Centennial Bank at 615 Elkcam Circle, at the Marco Island Historical Society Gift Shop at 180 S. Heathwood, or online at theateronmarco.com. Adult tickets are $10 (with discounts for groups), and tickets for children are $5.

For additional information regarding Neil Simon’s “The Odd Couple” or the Island Theater Company student summer camp to be held in July, contact the ITC office 239-394-0080.

If your children are interested in performing or learning more about live theater, this camp will be a wonderful opportunity and positive experience.