The Myth of the “Black Panther” 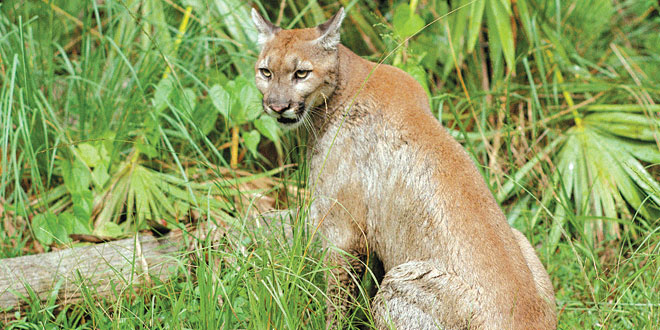 Over the years, there have been reports from hotel concierges, tourists and even some “old timers” of first-person accounts of “black panthers” lurking around the Marco Island beach dunes during the day. One tourist wrote a two-page letter in outrage that there was a “black panther” just a few feet away from children playing in the sand at the Hilton beach. Recently, a few true believers swear there was a “black panther” out on Sand Dollar “spit.” One of the best arguments heard is the “panther crossing” sign shows the outline of a panther in black, thus proving there are “black panthers.”

It is hard to convince some that Florida Panthers are not black, small or commonly seen on the beach in the middle of the day. Florida Panthers (Puma concolor coryi) are ALL tawny or light brown in color with creamy white undersides. There are small distinct patches of black coloring on the face, paws, legs and tip of a very long tail, but not enough to mistake this big cat as even partially black in color.

Panther kittens are camouflaged, born with black spots on a tawny pelt – never a solid black pelt – and the spots only last for two months in order to hide them in the den until they are old enough to come out.

Florida Panthers are definitely not small. Females are 70 to 100 pounds and are five to seven feet in length; males are 130 to 170 pounds and six to eight feet in length. That is quite a bit larger than, say, a domestic house cat… or even a bobcat. Not to mention that they are characteristically shy and very elusive. There has never been a documented sighting of a Panther on a busy beach. They would not be nearby in the dunes while children play in the sand or sitting behind a beach 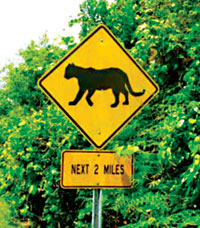 Panther Crossing signs are placed in known areas of known Florida Panther territory. Panthers can travel up to 20 miles in a day and regularly patrol their territories. Signs like this help make motorists aware and to follow the speed limits. Does this sign mean Florida Panthers are black?

vendor’s hut rubbing on legs and enjoying the shade.

While there are no “black panthers,” there are 20 subspecies of Puma concolor. The subspecies are commonly called: mountain lions, pumas, cougars, catamounts and panthers. Puma concolor coryi, the Florida Panther, has physical and genetic features that are distinctly different as well as being a small, isolated geographically, relic species of Puma. For example the Florida Panthers are distinct from Texas cougars in weight, skull shape and the color and texture of the fur. Texas cougars are 25-30% heavier and the Florida Panther. Historically, these subspecies did overlap geographically and breed in order to provide genetic variability necessary to sustain a healthy population.

So, there really are no “black panthers” on the beach, but this is not to say Florida Panthers, the authentic Florida Panthers, have not been on the Marco Island beach. They have! Large paw prints, collar radio-tracking data and even 2 AM sightings have documented Florida Panthers actually do lope down the beach in the wee hours of the early morning. Perhaps they are hunting those “black panthers!?” In reality, their main diet is deer, raccoon, wild hog, armadillo and even an occasional alligator. I’m sure if there is a domestic cat around, they would make that a meal too. Male Florida Panthers need up to 200 square miles as territory and will travel up to 20 miles a day to protect its

Rumors have it there are “black panthers” on the beach. This is a domestic feral cat in the Marco Island beach dune area. There are is no such thing as a “black panther” species.

territory from other males as well as to hunt. Marco Island’s beach, and possibly the whole Island, must be within one of the males’ territory. Keep in mind, there are no incidents to date of attacks on humans by Florida Panthers. In fact, all who have had the pleasure of seeing a Florida Panther are considered quite lucky to get a glimpse of these shy, elusive big cats.

In 1981, radio-instrumentation and monitoring the Florida Panthers by Florida Fish and Wildlife Conservation Commission (FWC) began to gather information on preferred habitat, range, behavior, and population. Collars on the big cats provide information on where the Florida Panthers are, for how long, monitor births and, ultimately, death rates. In 1995, it was discovered that only 20 to 30 Florida Panthers remained in the wild and kitten mortality was high due to geographic isolation causing loss of natural genetic exchange. A population that small is not sustainable. In effort to save the Florida Panther from extinction, eight female Texas cougars were introduced to south Florida to restore the genetic viability. It worked. Data shows the population tripled in just ten years. Today, it is estimated that there are 100 to 160 Florida Panthers in the wild. All are in Dade, Monroe, Collier, Hendry and Lee Counties, with a few males documented in central Florida. The offspring of the Texan cougars are considered Florida Panthers as they have inherited the distinct morphological and genetic differences that can be differentiated from other Puma species.

So, next time you notice a cat-like animal on the beach in the middle of the day, it most likely is a feral cat sunning itself on one of the most beautiful beaches on the planet and hopefully keeping the rat population down!