The Mystery of an 1890 Envelope Postmarked “Malco”

It was like an episode from PBS’s popular TV show – History Detectives, a local historical item with a large mystery behind it. The item: a very rare envelope with a most unique cancellation showing it was postmarked at Malco Florida and mailed in 1890 to a St. Clair Whitman of Cedar Keys, Florida. “Malco” was the official name of the first post office established on Marco Island October 20, 1888 at the request of Capt. W.D. “Bill” Collier (the builder of the Old Marco Inn). Capt. Collier, when asked why the name was “Malco,” said the post office would not allow him to name it Marco. Three years after it was established, on June 4, 1891, Collier convinced the postal authorities to change the name to Marco, but only after they had established that there was no other “Marco” in Florida. Collier’s post office was located on the original Key Marco, now known as Old Marco Village. In 1896, the archeologist who dug up the Key Marco Cat near the Old Marco Inn, Frank Hamilton Cushing, referred to the large main island south of Key Marco as “Caxambas Island.” Clearly things would be very different today had that name been retained for the entire Island!

But who was St. Clair Whitman of Cedar Keys? Unfortunately there is no letter contained in this 121 year old envelope, so we wonder what would have been the reason to communicate with Cedar Keys – a group of small islands located along the upper west coast of

The Whitman Family c. 1900 – St. Clair Whitman shown wearing a black hat, his wife Nellie to his right, his father Charles with the long beard, daughters Hattie and Nellie in front and his son Charles standing behind his mother Nellie. PHOTO CREDIT – ANCESTORY.COM

Florida north of Tampa and due west of Ocala? More research resulted in finding out that St. Clair Whitman was the head of a family which, around 1900, consisted of his wife Nellie, a son Charles, and two daughters Hattie and Nellie, who along with St. Clair’s father Charles lived together at Cedar Keys. A photo of the family, as well as a membership card of St. Clair showing he was a Master Mason was found in an antique store in Micanopy, Florida. St. Clair Whitman was born in 1868 in Missouri so we know at the time the letter was mailed to him from “Malco,” he would have been around age 22.

So what was the connection in 1890 between St. Clair Whitman and someone here on Marco? Further research shows historic and deep ties between the residents of the village of Marco and Cedar Keys. Before 1886 when Henry Plant brought his railroad down to Tampa, the principal port city in the area was Cedar Keys, Fl. Capt. Bill Collier, as a young man from 1871 to 1879, operated a shipping business via schooner between Ft. Myers and Cedar Keys. In fact, we know that on January 20, 1880 Capt. Bill Collier married Margaret (Maggie) Eliza McIlvaine of Cedar Keys, Florida when she was 22 years old and he was 28. Their first daughter Emma (“Nanny”) Collier was born later that same year on the schooner “Emma White” as it sailed back to Marco from Cedar Keys. After their first child was born 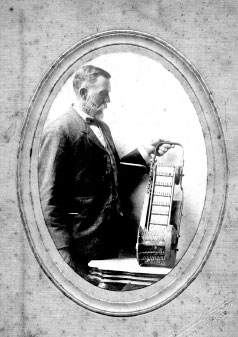 This tie to Cedar Keys, created by the marriage of Capt. Bill Collier, continued to impact Marco Island for generations. In fact, after Collier had invented the clam dredge and encouraged J.H. Doxsee to establish his clamming factory in Old Marco in 1910, Capt. Collier realized that many more employees were needed. The hurricane of September 29, 1896 hit Cedar Keys with 125 mph winds and a 10 foot storm surge sweeping over the town killing more than 100 people. The economy was damaged further two months later by a large fire and all of the trees which had supported the local pencil manufacturing industry were destroyed. Then, by 1909, the oyster beds were worn out. Capt. Collier’s encouragement for employees to come to Marco to work in the clamming industry was probably well received.

Workers moved from the Cedar Keys area of Florida to Marco to harvest the local clams which were cooked and shipped out by train. The small settlement where these families lived on Marco was known to the locals as “Cedar Keys” and was a group of homes located in an area northwest of Rose’s Marco River Marina; Bald Eagle Drive passes through the middle of this now invisible pioneer settlement.

Today Cedar Keys, Fl. is now singular – Cedar Key– and there is only one inhabited Key as a 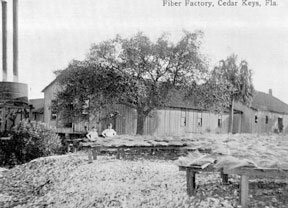 The Fiber Factory near Cedar Keys where the Whitman family worked.

result of the hurricane and problems in 1896 which forced a declining population to consolidate. We know that St. Clair Whitman and his family survived those problems and continued to live in Cedar Key for many years; in fact, the 1910 census shows him working as a foreman at a fiber factory with his son as a salesman for the company, and by the 1920 census both of his daughters were also employed there. This factory made brushes from Palmetto fibers, and a photo from the time shows palmetto fans outside drying. Today on the mainland near Cedar Key there is still a road named “Fiber Factory Road.”

So what is the relationship of St. Clair Whitman with Marco? The final answer may lie in the historical records of Cedar Key, Fl.; however, based upon his being 22 when he received the letter from Malco in 1890, a good guess for now is that either he or his wife was a childhood friend of Capt. Bill’s wife Maggie Collier.

I want to thank Dick Bergmann for sharing with me this unique envelope, and thank Faye Brown for her information on the location of the settlement of “Cedar Keys” on Marco Island and for sharing her mother’s recollections of the area.

Lastly, for “treasure hunters,” probably the only local envelope rarer than a “Malco” postmark would be one with a Comfort postmark; “Comfort” only lasted seven months before June of 1892 when the post office accepted Chokoloskee as the new official name. So remember to keep your eyes open for rare historical items!