The military life of Herb Savage 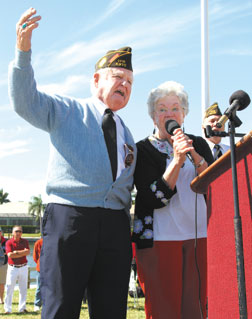 Herb Savage is a man who wears many hats. He has been married for more than sixty years and is a father to three adult children who have kids of their own. As one of the original architects to the Mackle Brothers, he designed the first hotel on Marco Island, now the Marriott. He also developed the original Deltona home design. He has been the President of the Florida Association of the American Institute of Architects. He is active in the Rotary Club of Marco. He is also a military man. And that is the “hat” he reminisced about less than a week before his 93rd birthday.

Herb Savage spent more than twenty years with the military, both active and in the reserves. He was drafted in 1940, about three years into his schooling to become an architect. He was sent to basic training in Missouri and joined the Army Corps of Engineers in 1941. He applied for Officer Candidate School in Virginia and was accepted. Here he studied mine warfare and demolition.

Savage came out a Second Lieutenant and was sent to Italy. This was, of course, during World War II. His expertise in mine warfare and demolition did not go unnoticed. He was immediately chosen to set up a training camp. “I was the main teacher but we had a staff of ten to twelve. We organized a training course for mines and demolition and taught the replacement troops as they came through.” Savage taught new troops how to disarm many different types of bombs and land mines. He also taught them how to use 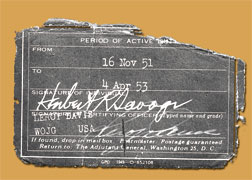 Savage still keeps his active duty card from Korea in his wallet.

In 1945 Savage received a transfer to the Orient. He boarded a ship in Italy and while passing through the Panama Canal they received word that the war had come to an end. He went back home to Miami where he had surgery on his thumb due to a shrapnel injury. In 1946 he was released from active duty and placed in reserves.

Herb went back to school and graduated from the University of Illinois in 1949 with a degree in architecture. He moved back to Miami, became a state certified architect, met his wife, Emily, and married her in 1950. They met at a church function. As Herb describes the story, “my mother had been bragging about me to all the girls at church. I pulled up in my 1949 Mercury Convertible thinking I was really something. They all took one look and said to each other, ‘this is the Adonis we’ve been waiting for? Ha!’ But she still married me anyway!”

In 1951 Herb and Emily were happily married and expecting their first child. He was suddenly called back to active duty due to the Korean conflict. This time Herb was sent to Japan where he spent 17 months as a Captain, then Major, then Lieutenant Colonel. His degree in architecture found him in charge of the Engineer School of U.S. Forces in Japan. His duties included developing buildings and facilities for the United States Military and for the Asian countries whcih had been devastated by war.

In 1953 Herb was released from active duty permanently. He went home to his wife and first daughter, Charlene. Emily and 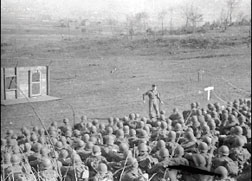 Savage stands out in front of new troops; teaching them mine deconstruction and demolition in Italy during WWII.

Savage has always kept a fondness for his military days. “I wish I was younger because I would still be in the military.” He explains, “The military taught me discipline, respect, to pay attention to obligations and responsibility. Throughout the years, I have always tried to be involved in organizations that represent these values.”

Herb is a man true to his word. He was a member of the Reserve Officers Association of Miami and began the Retired Officers Association of Marco Island when he moved here. The ROA has now grown to include Naples residents and meets once a month. He is also a member of the Marco Island Chapter of the VFW. He participates in many military events. Most recently, he and his wife, Emily, sang at the dedication of the new Veterans’ Memorial Park on Marco Island on Veterans’ Day. For these reasons, and many others, Herb was promoted to Colonel while on inactive duty.

Yes, Herb Savage is a man who wears many hats, even during his military days. Not only did he teach destruction but he also taught reconstruction. He taught how to build bombs, but also how to take them apart. He taught how to blow up a bridge but also how to build a new one. It seems that his reconstruction days, rather than destruction days in the military, were what truly prepared him for the future. His future: wearing lots of hard hats during the building of Marco Island.