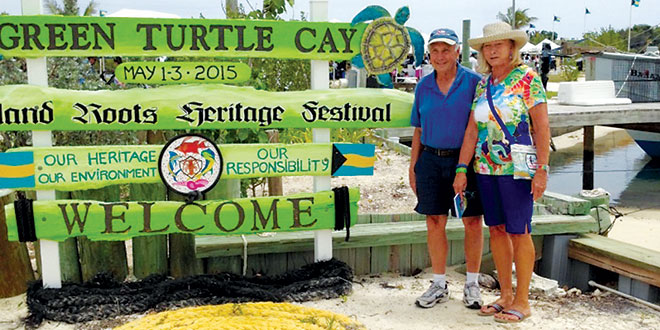 After a week of cruising the Abaco Islands, eight (we’ll call them land cruisers) joined members in Treasure Cay, about 21 miles from our last stop in Marsh Harbor. The spectacular sandy beaches are widely recognized as being among the top 10 beaches in the Bahamas. Collecting such treasures as seashells and sea glass was a great pastime. Treasure Cay also has the most romantic restaurant, Treasure Sands, where you can enjoy the most amazing food and breathtaking panoramic views with the most colorful sunsets.

Next stop, Hope Town, a little town in Elbow Cay, home to the famous Elbow Reef Lighthouse. Probably the most recognizable landmark in Abaco, the lighthouse is one of the last manual lighthouses in the world. The lamp 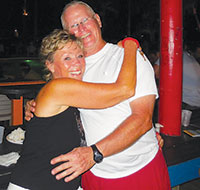 burns pressurized kerosene oil with a wick and mantle which has to be hand cranked every several hours to maintain the sequence of five white flashes every 15 seconds. It is so laid back, golf carts are the main source of transportation.

Winding the trip down on Green Turtle Cay for a long weekend where we were able to participate in their annual The Island Roots Heritage Festival that is held in New Plymouth each May. The festival celebrates the island’s loyalist heritage and African roots, and honors the peaceful cohabitation of the two cultures. Events are plentiful, including a parade, live music, a conch cracking festival, pirate demonstration, tug-of-war championship, and much more.

Because weather is always an issue, we extended our stay a day.

Some decided to stay even longer, some went on to Port Lucaya in Freeport, Bahamas, where we were stranded for an extra day again waiting for the winds and waves to die down a bit. Again some staying, some leaving for home via Miami then Marathon. After the 877 nautical mile trip, everyone made it back to Marco by May 10th, with no major incidences and none the worse for wear.

This is one of many boating trips the members plan, some for weeks, some just day and overnight trips. It is a great club to be a part of even if it is just to get together on land for the monthly Monday madness. But of course, safe boating is always the goal.

For member information go to www.marcobayyachtclub.com.