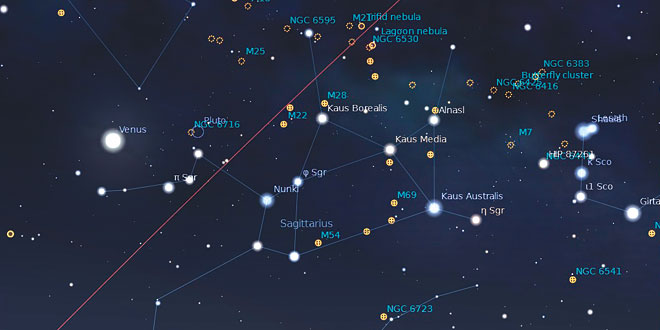 Looking east-southeast, 6 AM, Feb. 14. Venus is beautiful to look at, but no place to visit. SUBMITTED photo

Now that Valentine’s Day is upon us, it might be a good time to check out Venus, the namesake of the Goddess of Love. It might be mentioned in passing that Venus, the mythological being, was not exactly the goddess of love, but was solely the goddess of erotic love — not quite the same thing. Venus the planet, while beautiful to observe, is actually a fairly good approximation of Hell, with its 900 degree surface temperature, sulfurous smell and crushing air pressure. All this is due to the enormous quantities of carbon dioxide present in its atmosphere. Earth has roughly the same amount of carbon as Venus, but here it’s locked up in rocks, such as limestone, and plants.

Those of you that have been following the heavens will have noticed that Venus has vanished from the evening sky; it has crossed between us and the Sun, and has emerged into the morning sky where it will remain until September. The accompanying chart is for 6AM Valentine’s Day. This presents an opportunity to see Venus in broad daylight. Simply keep an eye on Venus as the Sun rises — a glance every minute or so will suffice.

Last time, we talked about the rich area of the sky about Orion. Now, Venus is near the only area of the sky that surpasses the great hunter, the Sagittarius, or Scorpius region. On the chart this morning, we have only the tail of Scorpius but the whole constellation of Sagittarius. This constellation is almost literally stuffed with interesting binocular objects. In fact, there are more Messier objects here than any other constellation. Sweep the entire area very slowly with your binoculars.

You might think it odd to be talking about summer constellations here in mid-winter, but in fact your favorite constellation is visible 10 or 11 months a year. It is just a question of when. So-called summer and winter constellations are classed according to their visibility during early evening hours; the earth continues to rotate as we sleep bringing additional constellations into view. Thus, by early morning, out-of-season constellations are clearly in view. Only the 10- or 15-degree wide band centered on the Sun is blotted out on any given night.