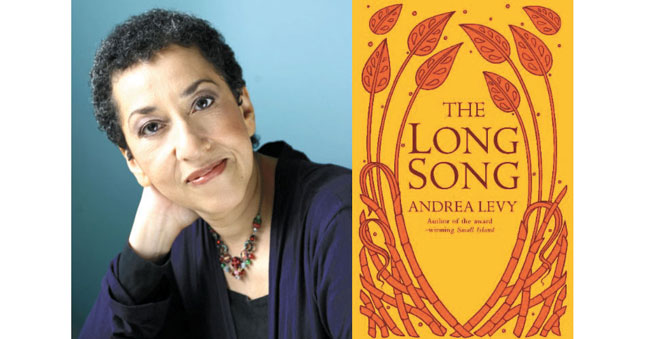 I know that some of you would rather be shot in the foot than read anything considered a “Historical Novel.” (Yes, I know, some of you think I should say ‘an’ rather than ‘a’ before the word historical. I took the time to look it up and both are correct depending on where you live, but the ‘a’ seems to be preferred in America today.) Now to get back to the subject at hand. “Historical Novel” brings on an image of dry and boring. I can assure you that The Long Song is neither of these. The author, Andrea Levy, was born in England of Jamaican parents. Since this novel is about both England and Jamaica she should have at least a chance of knowing what she is talking about. On the assumed basis that she also knows how to write, the chances are better than even that this might turn out to be a pretty good book. Since she won the Whitbread Book of the Year award and the Orange Prize for Fiction for her book, Small Island, I think we can safely place some faith in this assumption. She has once again done a stellar job of winning us over with a beautifully written story that brings history to life.

The Long Song is autobiographically told by an old woman with the encouragement of her son. This storyteller is “a woman possessed of a forthright tongue and little ink.” She is writing to tell us of her life as a slave on the island of Jamaica. It begins on the very first day of her life when she is born in the middle of a field while her mother is cutting sugar cane. Her mother, Kitty, is so intent on her work she does not even notice that she has given birth until she hears the wail of the newborn child. Kitty stops her work only long enough to wrap the child in a scarf from her head and strap her on her back before going back to her chore.

Well, actually that is not how it happened at all but it seemed like a good way to start telling her story and in fact she has various versions of July’s birth, all with a great amount of drama involved. One had a tiger sniffing at the newborn child, another a wind so fierce as to require Kitty to grab her by the leg before she was blown away. Fortunately, at her son’s insistence, the decision is made to write the true story of the birth which is actually equally harrowing, involving a long eight hour delivery in a dirt floored hut interrupted by the overseer, the father of the child, telling her to stop making so much noise as it is disturbing the enjoyment of his breakfast.

As a young child, July, walking along with her slave mother, is spotted by the mistress of the sugar cane plantation who decides she wants her for a house maid. Of course, no attention is made to her mother’s objection to this loss of her child and July is immediately taken from her. What follows is the story of what becomes of July, or Marguerite, as her mistress prefers to call her. Much of it is told in the voice of the Negro slave which adds to the experience and makes it come to life. The use of that voice gives one a truer taste of what is going on in the hearts and minds of the slaves and their vision of their lives.

You will soon find yourself immersed in these very lives and your heart will bleed for the inhumanity of their treatment, considered normal by their owners, in the nearly 300 years of slavery in Jamaica. There is, of course, humor, love, hate, rebellion, punishment, subterfuge, payback, reward, happiness and sadness, all the things that make any good book a pleasure to read. It is all there. But, please be sure to focus, not only on the enthralling story, but the poetic language with which it is told. Andréa Levy has a way of weaving words so that you can see the whole picture in your mind and enjoy every word as she has written it. This is no slapdash, get it on the paper style of writing, but one that shows great care has been taken to see that each word poetically relates to the totality of the phrase. One cannot help but appreciate the literary palette used to paint the whole panoramic picture in those perfectly selected words.