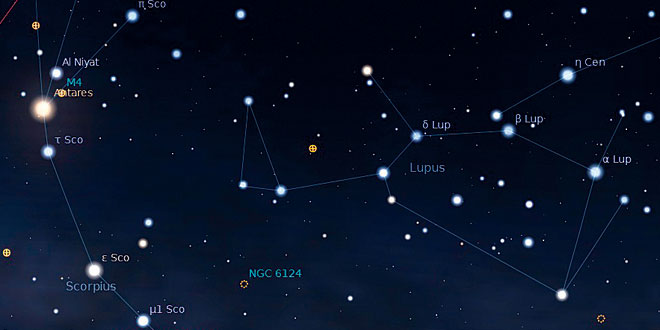 There are several dog constellations in the sky, but there is only one wolf – Lupus. Consisting of 2nd and 3rd magnitude stars it is a modestly bright constellation in the deep south lying between Scorpius and Centaurus. It appears to be on its back next to the Milky Way.

In very ancient times the constellation was considered to be part of Centaurus but about 2,200 years ago it was split off and was included in Ptolemy’s catalog, who additionally was the first one to refer to it as a wolf.

Most of the brighter stars in Lupus are a part of the OB association Scorpius-Centaurus. An association is a sort of very spread out cluster whose stars are no longer gravitationally bound to one another but are still moving through space at the same speed and direction. The OB is a reference to the hot, bright stars it contains. Several hundred stars have been identified in this association, in addition to the aforementioned stars of Lupus. Antares is the brightest member of the group, located in nearby Scorpius.

A number of the Scorpius-Centaurus association stars have blown themselves to bits in the last few million years via supernovas – most recently in the year 1006. That supernova was the brightest ever seen during recorded history, reaching -7.5 magnitude – about as bright as a half Moon!

In nearby Scorpius there is a most interesting star. During 2000, with no warning Dschubba suddenly became a variable star. At times it has become the second brightest in Scorpius, noticeably affecting the appearance of the constellation. Dschubba has a close companion star that has recently been implicated in the flareups.