The joys of traveling Down Under alone 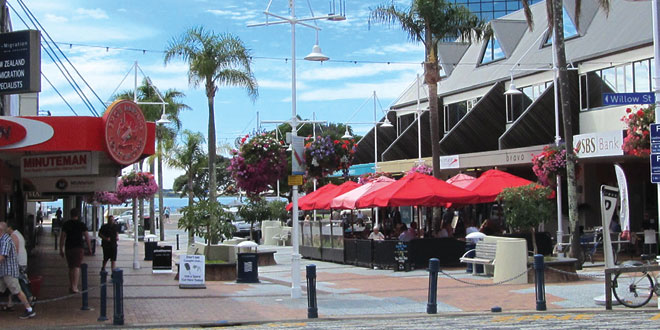 Many people dream of visiting Australia and New Zealand, but those same people are usually intimidated by the distance and the cost. These are certainly facts to consider but when you think of the rewards of being in these unique countries, you may find it worth the effort. Give yourself a lot of lead time to plan the trip, and if you ever thought about cashing in those reward points you have been so carefully stashing, now may be the time to do it and splurge. This may be a once-in-a-lifetime experience, so make the most of it and decide ahead of time not to spoil it by trying to do everything in the cheapest manner. Remember,– there’s a difference between “economize” and “cheap” when it refers to simply being wise about choices or giving up comfort. With a vacation like this, you may not want to indulge until you can afford a modicum of comfort.

Although the charges to your wallet may be steeper if you travel alone, it may drain your nervous system more if you choose the wrong travel partner — give it some thought.

The size of Australia itself can be daunting, so unless you are going to stay for a very long time, don’t plan to see a tremendous amount of it in one visit.

This trip has been on my mind since the day I discovered where koala bears came from, but other destinations seemed to have priority or were always easier to access. Finally I realized it is time to do it: now or never, while I am still mobile, vertical, and taking nourishment. My itinerary may not appeal to everyone as I did try to keep it simple, but it may give some an idea of how a single senior enjoyed what might be the best trip of her life.

I allowed myself a year to plan the trip. The first thing I did, was find a cruise that featured ports in most of the places I wanted to ‘sample’, at a time of the year I thought might offer pleasant weather in the area. As I said, my way may not necessarily suit you or be intense enough, but in my opinion a cruise is a good start for seeing different areas with little wear and tear on the body. If you have a lot of energy, you can use it once you dock at the port.

The cruise I chose on the Oceania Line left from Auckland, New Zealand and stopped in Tauranga, Napier, Wellington, Akaroa, Timaru, cruised the Fiords of Milford then crossed the Tasman Sea to Hobart, Tasmania/Australia, Melbourne, and

Auckland, New Zealand – from the waterfront. PHOTOS BY CAROL GLASSMAN

Sydney. The cruise offered “free airfare” but in the past I always found that involved leaving from a location of their choice that is not always convenient to me, and may have involved several stops; I opted to arrange my own flights and land transportation, arrive in Auckland a day or so before the cruise began, fly business class, and then fly out of Sydney from where the cruise ended.

A few weeks before leaving, I picked up cash for both countries at the bank. I also carry a bank card that allows me to withdraw money from any country in the world in that country’s currency, for no charges. My credit card also has no exchange rates tied to it.

I flew from Miami International Airport to Los Angeles, CA, and from there connected with a flight to Auckland via Sydney. I used credit card reward points for business class and am afraid I am forever spoiled! Once checked in at the LA airport, I was treated royally in the Business Class Lounge where one can eat and drink, relax, use one of the many iMac computers, take a shower or have a nap. Most passengers were taking advantage of everything offered. If they, like me, were facing a 20-hour+ flight that departed around 11 p.m., they might have been wiser to indulge in some relaxing activity and plan to get a few snoozes in flight.

Each business class seat on Qantas Airlines is like a little self-enclosed pod that has a pop-up TV screen, and adjusts into a full-length single bed. You are given a rolled-up mattress, blanket, and cushion as well as jammies and a designer case with eye shades, ear plugs, socks, and toiletries. Before you tuck in for the night, you are given a menu from which you can choose items for breakfast and indicate when you would like it.

Guided by my usual sleep habits on planes I had brought a lot of things to do and read, but much to my surprise, once the lights dimmed — so did I. I slept quite well in two-hour segments and was almost wide-awake when breakfast arrived. I made sure to stay well hydrated with a bottle of water at my elbow at all times.

The airport in Sydney is large, bright, and modern and by the time I walked to the domestic flight departure I had just enough time to investigate a few shops and board the final flight to Auckland, where I was met by a very efficient driver who took me to my hotel, the Sebel Suites at the port. The hotel overlooks Auckland’s beautiful marina area 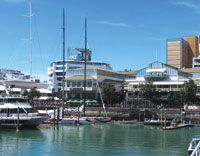 whose boardwalk is lined with elegant restaurants, a marine museum, hotels, and touring boats that promise whale watching and spectacular views of the city from the sea. The major docks for large ships are less than a five-minute walk. After a solid night of sleep I set out in cool, sunny weather for a brisk walk along the waterfront to the main downtown area. Once on Queen Street, I could have been in any American city lined on each side by any well-known store one would see in a suburban shopping mall. A 10 or 15-minute walk up one side and down the other confirmed what I had read, and I decided to venture into some of the alleys where I found some delightful boutiques and a charming bistro for brunch. Well refreshed for further walking, I took a different route back to the hotel, stopping in a supermarket to pick up a few items that I could store in the refrigerator in my room in case I didn’t want to indulge in a large dinner, and for breakfast the next day. I’m a confessed foodie and like to compare prices wherever I go. Although breakfast had not been astronomically high, I was a little stunned at the prices in the supermarket, and I don’t think it was because of its location, from what some of the natives told me. I dropped in at McDonald’s to try to connect to WiFi and was surrounded by a bevy of others drinking coffee and doing the same thing, and all very friendly.

By the time the ship left Auckland the next day, I had familiarized myself with its downtown area and was ready for the next step of the adventure which took me to the small town of Tauranga, NZ.

While planning the trip, I had considered signing up for some of the land tours, thinking that as a single person in a strange country I might do well to get on a bus and be taken to the highlights. Fortunately, I listened to someone who advised me to save my money for something better. In most of these small towns where English is spoken (well, a variety of it considering the wonderful accents) there are other options. A lot of the small towns can be seen very well on foot, or by a day pass on the local transportation system that would cost $10 – $15 with on-off privileges. In fact, almost every town was smart enough to send shuttle buses right to the dock, carrying passengers all day to the tourist centers in the middle of town/their commercial areas and from

Napier, New Zealand – in keeping with the Art Deco style, these vintage cars are available for touring.

there one could either walk or sign up for a variety of less expensive tours, acquire maps.

Once in downtown Tauranga, I opted to wander on foot until I felt the need for lunch. It gave me a personal feeling for the town and in the beautiful weather I enjoyed chatting with natives and finally choosing a delightful place for a seafood lunch. A very sweet waitress pointed out that there was no need to tip — when I found no place on the bill to add one. The small city is immaculate and easy to access.

The next day was spent at sea, with all the shipboard options and entertainment one would expect on a luxurious cruise, from personal spa training to miniature golf and table tennis, a fully stocked library and coffee bistro, swimming pool, trivia contests, bingo, and a gambling casino, not to mention the constant availability of fabulous food. The Oceania line also offers cooking lessons in a high-tech facility where each student has his own station and utensils. The class is run by personable chefs with assistants to make sure you ‘don’t burn the toast’.

Napier, NZ was the next port of call and what a surprise that was! I had read that Napier had been almost completely destroyed in an earthquake and fire in the 30s. The city had voted to rebuild in the Art Deco style but I had not expected to see a seaside resort that felt almost like a recreation of a vintage Hollywood movie, putting Miami’s Art Deco district to shame: building after building tastefully shows the signs of Art Deco, right down to the simplest diner welcoming guests with door handles reminiscent of the times. From the moment one steps off the shuttle bus, there is a choice of vintage cars available for hire to take city tours. But this is a place where one definitely wants to walk, and see every little bit of trimming. The main pedestrian mall in the city has period sculptures that almost come alive, especially one of a flapper-looking woman with her dog.

The natives were warm and welcoming, with added attractions in the streets of a local high school’s cheerleaders strutting their stuff, along with a Highland pipe band.

After five or six hours of sightseeing on foot, I was ready to return to the ship.

Wellington, NZ was the next port of call, and for once, I had a goal: I wanted to see their famous Te Papa Museum of the Maoris.

(Carol’s trip continues in the next edition of Coastal Breeze News.) None of the places mentioned or Oceania Cruise Lines has contributed in any way financially to this trip.