The Isle that is Capri 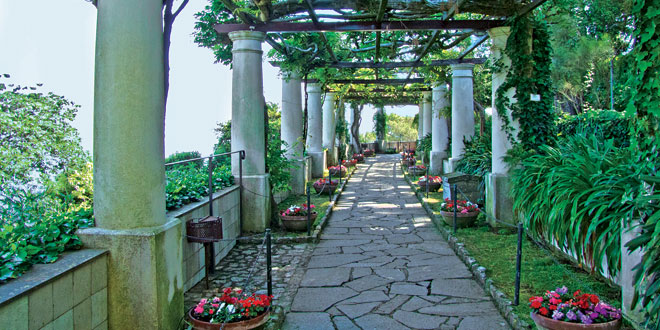 I wish I could write with enthusiasm about Capri, I really do. It does have the most beautiful turquoise water, wonderful views, and some nice shops, and the approach to this mountainous island jutting up out of the water is impressive, but I just can’t bring myself to rave about it.

Part of it is my fault. Instead of planning an overnight trip which might have given us a better experience and allowed us to get off the “beaten path”, we joined the army of day trippers, traveling by boat from Amalfi. It was all tourists, tourists, and more tourists; and we went in early June, before the high summer season. Top that off with the hawkers who attacked as we stepped off the boat and traveled toward our next mode of transportation, and it left both of us with no desire to try to return for that overnight visit.

Capri has been popular since Roman times when Emperor Tiberius chose it as his home. He built twelve palaces here and the remains of Villa Jovis still hover above the island. Through the ages Capri has taken on an air of glamor with such visitors as the Marquis de Sade, Oscar Wilde, George Bernard Shaw, D.H. Lawrence, Rita Hayworth, Aristotle Onassis, Princess Grace.

Visitors disembark at the port, Marina Grande, from which you can take a funicular, bus, taxi, or walk 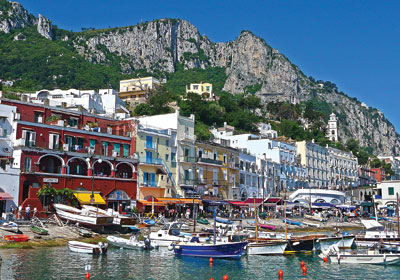 to Capri town. Above Capri, is a second small town, Anacapri, somewhat less frenzied, but still well visited. Buses and taxis provide transport from Marina Grande and Capri to Anacapri. If you are on your own rather than with a tour, you might want to consider springing for one of the expensive convertible taxis as the bus has very few seats and most riders have to stand. The taxi tariff from the port to Anacapri is 20-25 euros.

The ride up to Anacapri is not particularly attractive. If you take a taxi up, but want to return to Capri via bus, don’t wait at the main bus stop in Anacapri. Rather, walk up the street a bit further to Piazza Pacce where the bus originates; you will almost be guaranteed a seat from this location.

There are a few sites and shops in Anacapri, but the real draw is the opportunity for some terrific views. If it is a clear day, the short chair lift ride up Monte Solaro provides a panoramic view of the island and the Bay of Naples.

Villa San Michele also offers views of the coast below. Built on the site of one of Tiberious’ villas, it was built in the late 19th century by a Swedish physician.

From the gardens, it is possible to look down on Capri town and marina and across to Mt. Vesuvius.

The majolica tile floor in the

Church of San Michele Arcangelo in Anacapri is a beautiful depiction of the expulsion of Adam and Eve from the Garden of Eden. Climbing a spiral staircase provides a dramatic overview of the floor.

Capri town is probably quite charming after the day trippers have departed. Narrow streets and alleyways twist among shops and restaurants. There may well be some real treasures here, but it was difficult to really enjoy a stroll given the elbow to elbow tourist throng. The main square is Piazza Umberto I.

The Certosa di San Giacomo is a preserved 14th century monastery built on the location of yet another of Tiberius’ villas. It is about a 2 km walk to see the remains of Villa Jarvis with its majestic views, if one is ambitious. Another walk for the zealous, although it is only about half the distance as the Villa is to the Arco Naturale, an arched rock formation that is the remains of a once large grotto in this location. Ten minutes below it is a natural cave.

Another beautiful vista is from the Giardini di Augusto (Gardens of Augustus). These terraced gardens lead to the zig zag Via Krupp which leads down to Capri’s smaller harbor, Marina Piccola. Marina Piccola is also accessible by taxi or bus.

My favorite view, however, was from the Belvedere Cannone, a short walk from the center of Capri town. So named because of 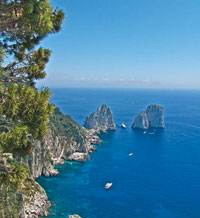 a cannon placed here by the French in the early 1800s, it does not seem to have to have been overly discovered by tourists. It is a quiet, shaded walk to the location and for most of the time we spent there, we had it all to ourselves. The view down to the Faraglioni rocks, three huge rocks that often serve as the symbol of Capri, is magnificent. Rather than taking the road to reach the Belvedere, we ascended a staircase opposite the restaurant Da Giorgio and then it was a flat walk to the lookout.

A big tourist attraction on Capri is the Blue Grotto and almost everyone makes a boat trip to this site. I say almost everyone because we did not. Yes, we knew that it is touted as a “must see” and the blue light reflected from the sea onto the walls of the cave probably is stunning, but we were just so turned off by all the people and all the hawking when we first arrived that we looked at each other and said “nah”. The schedule of boats going to the Blue Grotto depends on the tide and sea conditions and it is a trip best made early in the day.

There are various vendors who offer sightseeing boat trips around the island; some of them include a stop at the Blue Grotto. Another way to see the 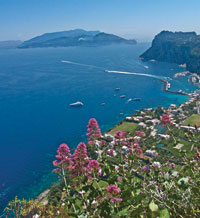 View from Belvedere Cannone, a quiet oasis amid the frenzy of Capri.

island that some enjoy is renting a a scooter. That probably would have afforded a good opportunity to get away from the crowds and begin to enjoy the island, but, alas, I am not that brave.

Alternatives to touristy Capri are visits to the islands of Ischia, the filming location for the wonderful film, il Postino, or Procida. Unfortunately, we visited in early June and the boats were not yet running to either island. We were told that they probably would begin around the middle of the month.

One word of caution for return trips from Capri. At the very busy harbor of Marina Grande there are large electric boards that list departure times and docks for the various boats returning to the mainland. The signs are not always accurate. We, along with a few other people, were lined up at our designated dock when a quiet murmur began within the group. The word was that this wasn’t the correct dock; the correct one was 5 slips away. The signs hadn’t changed, so we asked a number of dock workers. Some said they didn’t know; others said that yes it had changed. So, we, along with some others. moved. Others, including a group of people waiting with porters from local hotels toting their luggage, remained at the original dock. As we were just about ready to depart, we noticed them running toward the correct location; they made it just in time.