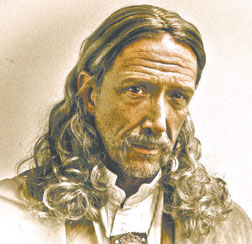 Submitted by The Island Players

The Island Players is pleased to present Wild Bill! An Evening with James Butler Hickok, to be performed March 22-25.

“I was traveling to Mendota, Illinois to pick my family up at the train station there,” Willey explains. “And on the way there’s this sign: ‘Troy Grove, Birthplace of James Butler “Wild Bill” Hickok.’ I had no idea we were born in the same county, forty miles apart!”

Willey, who played “Jackson Montgomery” on the long-running daytime drama All My Children for almost 25 years, had been looking for a one-man show to take on tour. “It was serendipity. I began to research this man’s life and I was fascinated! Even with the myth and fable surrounding him stripped away, his life is as exciting as any of the fiction written about him. And he’s six-foot two, blonde and blue,” Willey quipped.

“This is a man who was, in his lifetime, a farmer, a plowman, a teamster, a scout, a spy, a marshal, a sheriff, a gunfighter, an actor and a gambler – and a legend in his own time. And he died at thirty-nine! In western movies, when we see gunfighters step into the street for a showdown, it’s because Wild Bill did!” Willey is clearly enthusiastic about his new role. Does he see some of “Wild Bill” in him?

“I guess so. There’s the obvious; Midwestern boys who end up in the spotlight. But there’s a war inside Hickok – between the reputation and the man, the legend and the human being, the role and the one playing it – that last is something with which I certainly can empathize.”

Wild Bill! An Evening with James Butler Hickok stars Willey as Hickok. The presentation is in monologue form, with “Hickok” addressing the audience. “Essentially, it’s Hickok’s life story from his own mouth. The sources I’ve used are the ones that lean on provable truth,” says Willey. “Whether Hickok could separate his truth from legend…well, that’s the journey.”

The first-person narration follows Hickok’s life from his birth in Illinois, through his years as scout and sharpshooter, spy and lawman, gunfighter and gambler, to his assassination in Deadwood, the infamous mining camp.

After the presentation, attendees are encouraged to stay for a question and answer period and a meet and greet with Mr. Willey.

Tickets are $20 and can be purchased at Centennial Bank / 615 Elkcam Circle, or at the Marco Island Historical Society Gift Shop / 180 S. Heathwood. Online tickets are available at www.theateronmarco.com.

The Island Players’ production of Wild Bill! An Evening with James Butler Hickok will run for four evening shows March 22 – 24 and one Sunday Matinee on March 25th. Evening performances begin at 7:30 PM. Sunday matinee performance is at 2:30 PM.

The Island Players has many exciting shows planned. Additional information on Wild Bill and future shows or auditions visit www.theateronmarco.com or call 239-394-0080.