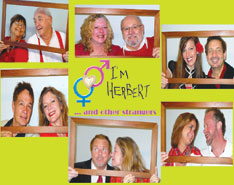 The Island Players announces Centennial Bank is presenting sponsor for their production of I’m Herbert…and Other Strangers.

Tickets are now on sale and can be purchased at Centennial Bank / 615 Elkcam Circle, or at the Marco Island Historical Society Gift Shop / 180 S. Heathwood. Online tickets are available at theateronmarco.com.

The Island Players’ production of I’m Herbert…and Other Strangers, is collection of five distinct views of love & family relationships at various stages in life.

February is about love and “love is in the air”…or is it? It’s the baby-boomer generation and a decade when society’s traditional beliefs on war, religion, politics, sexual moves, etc. were questioned. The struggle between a “traditional” upbringing and the more “modern” ideas of the decade is mirrored in a series of intelligent, insightful, frank, and surprisingly balanced “debates” between our principal characters. The net result is a very witty, and sometimes poignant look at relationships featuring a very talented cast of actors capable of expressing the comic and dramatic elements of this play with equal dexterity. You will laugh with them and relate to them, but most of all, you will love them.

We hope you will not only be entertained by this production but come along with us on our trip back to the 60’s and 70’s.

The Island Players’ production of I’m Herbert and Other Strangers is directed by Richard E. Joyce. It will run for ten shows over three weekends beginning, February 3rd until February 18th.

The Island Players has many exciting shows planned. Additional information on I’m Herbert…and Other Strangers and future shows or auditions visit www.theateronmarco.com or call 239-394-0080.