The Importance of Holding Serve 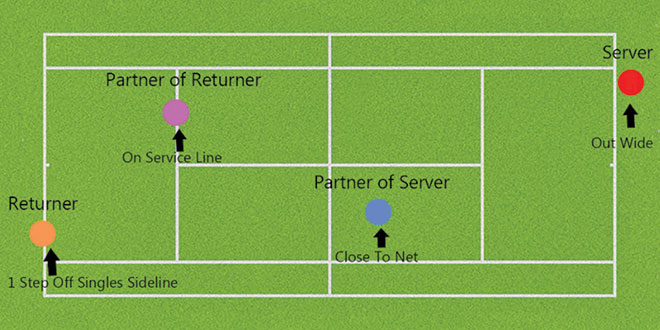 I enjoy watching tennis and golf on television because the commentators (who are usually retired champions themselves) do such a great job of explaining what is occurring mentally and emotionally with a player, which directly translates to what is occurring physically as the players compete.

How many times do you hear winning players being asked, “What made the difference in your game today?” In tennis they usually say something like, “My serve was really on today,” or a golfer, after a good round stating, “I was hitting my driver well today.”

Like hitting a good drive off the tee in golf, serving well in tennis and pickleball can directly affect my ability to confidently execute shots in the rest of my game.

Holding serve in both tennis and pickleball can create a momentum, and it is a momentum a player can run away with. When I am serving well, I feel that I am in control of my game and in charge of the situation!

In tennis, the server has a definite advantage of first strike opportunity when starting the point. It can provide the server a chance to take strategic, offensive control from the first hit and hopefully dictate the structure of each individual point.

In pickleball, while the serve cannot really be utilized offensively and strategically to take control of the point as it can in tennis, the theory of the momentum of holding serve is the same.

Therefore, the setup for starting a point in tennis is different than it is in pickleball.

Different from tennis, in pickleball, the server has only one opportunity to get the serve in play, and the great equalizer is that the serving team must let the return bounce. There is no serve and volley and no poaching allowed on the return of serve from our opponents. Because of this restriction, servers are not attempting to dominate strategic control of the point as much with the serve as they would in tennis. 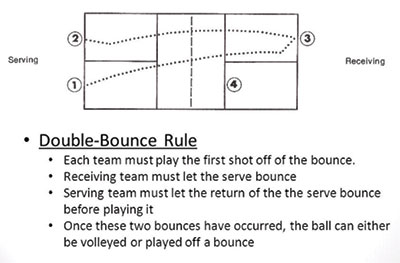 speaking, as a server in pickleball, I am attempting to neutralize my opponent’s position, by trying to force the player to hit the return from a position behind the baseline at the back of the court.

As a server in tennis, while my goal is also to neutralize my opponent’s position, I am, (especially with my first serve), attempting to force my opponent to hit a weak return, which I can aggressively attack on and have a possible opportunity to hit a volley or overhead with my second shot. The luxury of being able to strike the return coming from my opponent in the air, and strike the ball in the air as close to the net as possible, provides me (or my doubles partner) a great opportunity to dominate my opponent’s position, take control of their side of the court and win the point.

In tennis, if I am down a break, I can still come back, by winning/scoring points during my opponent’s service game, and get the break back. In tennis, I can win the entire match when my opponent is serving.

But in pickleball, we must get our serve rotation back in order to score points. In pickleball, if I am not serving, I can’t win! Because of this, as a competitor in both sports, I personally feel that the pressure of holding serve is more of a challenge in pickleball than it is in tennis.

In both tennis and pickleball, the server has the privilege of dictating and controlling the speed of play in between points. A strategic opportunity that many players do not take advantage of! There are times when, as the server, I may want to speed things up and not give my opponents time to re-group or?refocus. There are also times I may want to slow things down to thwart or throw off their momentum.

Either way, as the server, I want to control the momentum of flow of time in between points to

whichever time frame is most comfortable and advantageous to me.

As a coach and a competitor, I utilize somewhat of a unique strategy, which I apply when I play. I recommend always letting my opponent serve first. The reason being, that in a competitive situation, all players are a bit nervous and tight starting out.

In tennis, I like to get a few points under my belt, allow myself to hit out on a few balls, get my feet moving and get some air in my lungs to help me be a bit more relaxed and comfortable. The worst thing that can happen is my opponent holds serve to start the match. However, I may get a break of serve and be up early in the set!

In pickleball, this theory holds even truer, because my opponents only get one service turn to begin the game. Even though I am allowing them to serve first and they may put a couple of points on the board, when we get our serve rotation, we now get two service turns to score points. More importantly, if I can win that first point on my opponent’s serve, my team now has an opportunity to take a solid lead.

Wayne Clark is a certified professional tennis instructor with over 25 years experience coaching players on all levels of the game. Wayne is also qualified in pickleball instruction. He has been the head instructor at The Marco Island Racquet Center since 2001. The Racquet Center offers clinics, private and group lessons for both tennis and pickleball. Coach Wayne’s Island Kids Tennis juniors program runs year round and has classes for players from kindergarten through high school. Contact Coach Wayne by email at WClark@cityofmarcoisland.com, by phone or text at 239-450-6161, or visit marco-island-tennis.com.