The House of Horrors – Part VI Aha! Is That a Tunnel I See Before Me? 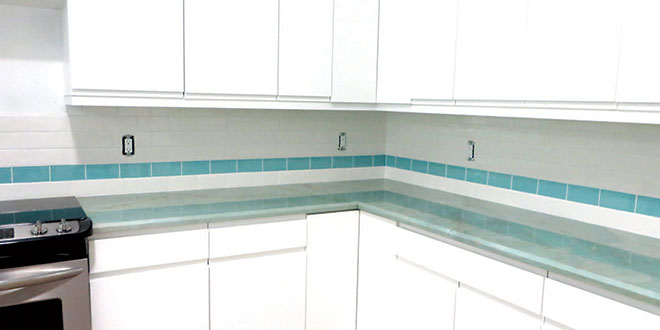 The day after the new kitchen cabinets arrived was Friday, March 18 and we all know how much work is usually accomplished at the end of a week: almost as if the Lord declared a day of rest in order to get ready for a few days of more rest.

I was up and ready to admit workers at an early hour, and as usual sat around for three more hours until they actually arrived. I must admit I was a little dubious when two rather slight fellows, we’ll call them Joe and Moe because they looked so much alike, arrived. My feelings of doubt were soon dispelled as within a few minutes they began to make up for lost time by covering the floor to protect it and manhandling the heavy units easily, unwrapping and placing them around the kitchen with great care.

There’s an old joke circulating, that all you need to be a carpenter or a handyman in Florida is a Ford T-150 pickup truck (doesn’t matter which year), a hammer and a screwdriver. A license, measuring tape, and level are optional.

These workers arrived in a rather battered van, but had all the necessary tools which they used non-stop. In spite of their lightweight appearance they worked like powerhouses and seemed very knowledgeable about the product. Although I didn’t stand over them watching their every move, I was impressed by how often they measured, re-measured, and went back and forth with a tape measure and a level.

I have a little confession to make: without boasting, I can honestly say that I know more than a little about woodworking, painting and general handy-person tasks. Although I wouldn’t undertake anything but the most rudimentary electrical or plumbing jobs, my late husband and I used to share the humor of my running around with hammer, screwdriver and wrench making minor repairs while he, the engineer, sat and read his way through a newspaper. All my life I have taken great pleasure in being ‘the handy person around the house’. My parents raised us to be independent and I guess that was part of the package. I have hung pictures, made small pieces of furniture, painted, laid tiles in small areas, and in our northern home had my own wood shop which I helped build, where I carved ducks and fashioned other woodworking projects. Perhaps you can now imagine why this entire exercise in craftsmanship was even more frustrating to me: I knew how most of it should be done and how it should look when finished properly. A little knowledge is a very dangerous thing!

Mid-afternoon Diana arrived and reviewed the installation. There was a minor problem which she quickly solved. I was impressed with the quality of the cabinets; they were much nicer and sturdier than the custom-built kitchen being replaced. All of the shelves rolled out smoothly and along with the doors to the cabinets, quietly self-closed. I was also impressed that Diana clearly stated, “I made a mistake,” and worked quickly and efficiently to rectify it.

A lot was accomplished the first day and I was both eager and anxious to see what happened the following Monday.

After a late arrival on Monday, Joe and Moe almost completed the entire kitchen except for a few minor details, which were finished on Tuesday. One worker had been designated to complete the final punch list on the house and said he would be back the following week to begin that and to add the screw caps inside the upper cabinets. I knew I wouldn’t be unpacking very much on the coming weekend.

As planned, on Thursday afternoon a crew arrived to replace all but one of the quartzite counter tops. Diana was also here to supervise and fortunately it was done smoothly. On Friday, a plumber appeared to reconnect the kitchen sink

The roosters receive a much-needed bath and finally return home.

and the water line in the refrigerator. One small glitch: whoever removed the faucet disposed of all the fittings. Rather than order these, we decided to replace the faucet completely.

As the work list began to shrink, I only hoped the momentum would continue and the remaining work would be done quickly. Next we needed an electrician to check out all the electrical outlets that had been drowned and to reconnect the stove, dishwasher, and microwave. He would also replace the fixture in the dining room that the over-zealous demolition crew had shattered. I wondered how long it would take to light up my life. Are we taking any bets? Diana had suggested everything would be done by the end of April (but she neglected to say of which year). I said nothing.

The next week began with a bang and ended with less than a whimper: I unpacked all the pots and pans and baking utensils and put them in their new homes, ruthlessly tossing out all the orphans and battered pieces I knew I would never use. By Thursday I was flattened by a terrible case of flu, but unwilling (if anyone had asked) to cancel any work appointments. I didn’t have to crawl out of bed until Friday, April Fools’ Day (how fitting), when the electrician arrived. As soon as he left, half of the tasks done, I crawled back to bed for another few days knowing I now had a functional stove just in case hot food was on the menu. The electrician said he would call the following week, once he had assembled all the fittings he needed. It took me almost another week to summon the energy to ask, “So where is everyone?”

And then, two fellows showed up to cover the counters and install a lovely new backsplash with a beautiful aqua glass tile trim.

Between all the horrible symptoms that accompany the flu, I made use of the time when my eyes were open to try to get some action from the roofer. The hole in the overhang which he had promised to repair three to four months ago was still not done, and a long arm of eavestrough was dangling off the back of the house. I heard all the right words but no one showed up for another few weeks. One thing really upsets me – take the roofer for example. A team of two young men finally showed up to do the repair. They looked at me and I looked at them: they had no idea why they were sent. They also had no idea that I put out a call for help perhaps three-four months ago, and maybe — just maybe, I was a little ticked off. I knew they were probably competent enough to repair the roof, just as I knew they probably didn’t have the right materials to do it, and that they were then going to take off to get the materials and I might not see them again for several months. But this didn’t entitle me to a hissy fit, after all, how can I kill the messenger? These poor guys were just sent to do a job. Lo and behold — they came back and worked assiduously until both jobs were done. Hallelujah!

I wonder what would happen if we, as consumers, took as long to pay bills as it takes these companies to do the work? And of course, we would absolutely refuse to pay interest on outstanding amounts.

We were now up to mid-April folks, nine months since we began. In nine months a person can give birth to a baby; this entire house was custom built and completed in nine months.

What’s wrong with this picture?

Don’t miss the next nail-biting chapter as we grind towards what we hope will be the eventual conclusion.

Jewelry Common SenseLet Me Tell You Something!How To Impress A Woman: Especially During These Trying Times