The House of Horrors – Part 1 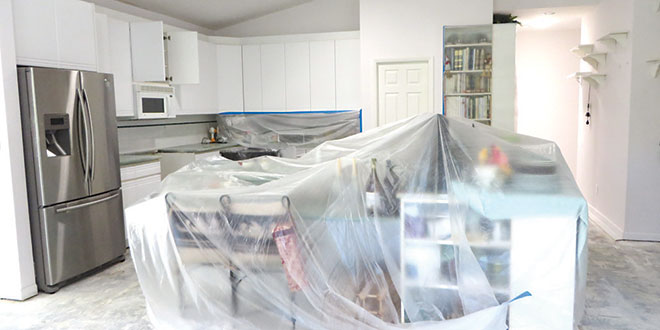 The story isn’t really unusual, nor is it unfortunately, unique. Almost everyone who has suffered through home repairs probably has a similar tale of woe, but as you follow this one over the weeks, you may understand why I felt it needed to be shared with the public as a “consumer beware” saga.

Only the names have been changed – to protect the guilty.

Do you remember the last week in July, here on Marco Island? It rained. It didn’t just rain, it poured, and by the time I woke up on Sunday, July 26, there was approximately 8.5 inches of rain and it was all on my kitchen floor. At least that’s how it looked and felt as it swirled around my ankles. When my initial panic subsided and I knew I had to act, I realized that no sponge mop in creation would soak up the mess, so I headed for the storage room and a pile of large assorted beach towels awaiting just such a disaster. Without exaggeration, I spent the day cycling 25 towels from the floor to the kitchen sink and the dryer – but the water kept coming. As it oozed up onto the floor from under the cabinets, it didn’t give me the option of catching it in a pail. I debated among three causes: a leaky refrigerator, a burst plumbing pipe, or a leaky roof. As far as I could tell, the refrigerator was innocent, the ceiling seemed dry, but 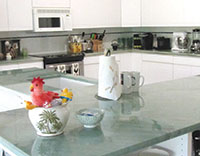 the water was coming steadily from under the kitchen cabinets in the corner of the room. Late afternoon when it stopped raining, the quantity of water tapered off a bit but during the all-night vigil that followed, it just kept coming. I left a call for my trusty handyman who arrived at 8 AM Monday morning. Unfortunately, he is not licensed to repair roofs, but between us we decided that must be the culprit. He released a backup of water from under the roof overhang on the outside balcony and suggested I call a roofer.

Four years ago, when the house was a mere 12 years old and the roof leaked, I had it repaired by a company that talked me into putting a special coating on the roof saying, “You’ll never have another leak.” Right. At the time, with their five-year warranty, that was music to my ears. When I called them to discuss the current problem, the music became rather discordant. The company’s owner informed me, “Oh, that coating is for wind!”

Did he think I was likely to spend all that money on something to prevent wind damage? He said he could come in “a few weeks” to repair it at a very large cost.

Before you tell me I should sue the #@$%&*! and report him to the Better Business Bureau (BBB), I can tell you that in the years since I had that specialized treatment done, a long list of injured parties just like me has formed with class action suits in two countries. And if you think the BBB is effective, think twice.

Attention: DO NOT EVER PUT A COATING ON YOUR ROOF TILES!

Crying over spilled milk wasn’t going to get my 16-year old roof repaired, and every company

who came to give an estimate (and just try to find one in the rainy season here) said the same thing: they absolutely refused to try to repair a roof that had that particular treatment, and would only tear off all the tiles and install a new roof.

While sitting in my now temporarily dry kitchen (it was only wet when it rained) contemplating my choice of one way to go, I noticed the bottoms of my cabinets and baseboards were looking decidedly warped. Not a good sign. In addition, the grout in the tile floor, not only in the kitchen but clear across into the hall and living room began to lift – an indication, I am told, that the tile is loose ad moving. As if that were not enough, when I opened the cutlery drawer my very delicate nose picked up the odor of mold and/or mildew. Realizing I was now in over my head, quite literally, I called the insurance company. Their first question was why had I waited so long – it was about a week after the initial flood. I guess in some cases it’s not good to be independent. I figured I had a leak, I mopped it up, and now I needed to fix the roof. I knew insurance would not pay to repair a roof unless something hit and damaged it, or wild weather blew it off completely, but with what I was seeing in my kitchen I thought I might need a little help with things under the roof, feeling especially ignorant when mold and mildew were involved. They promised to send an agent the following week – that would have been around August 10.

Meanwhile, a friend of mine recommended a fellow 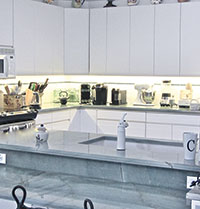 who had just done a great job on his tile floor, so I made an appointment with the same person – we’ll call him Tony. Tony’s news was not so great either. All the rooms in the house are contiguous, covered with the same 18-inch white tile, which of course, is no longer available. He brought a couple of samples of tile and with sinking heart and shrinking wallet, I chose one. However, I mentioned the leak and said I didn’t think I wanted to begin the new floor until the roof was repaired. Tony works for a reputable local tile company and when he said he was also a general contractor, I felt quite relieved. He began to point out water marks turning brown on the ceiling, which I had not yet noticed above my stove and predicted that the water had no doubt leaked between the outside walls and the drywall, behind the cabinets. Just 18 months ago I had installed new counters in the kitchen, one-of-a-kind quartzite from Peru, and the idea of removing them or the cabinets around them was not a happy consideration. Tony said he knew the company that had installed the counters and could work out something with them. At that moment, with a variety of problems snowballing all from one darn leak, it was a relief to have someone not only to share the problems with but also to have some solutions. Tony offered to come to the house the following week and meet with the insurance adjuster and go over the obvious damages, as well as discuss the possibility of some that might not be evident yet. In the following weeks I was to find out just how insidious a water leak can be.

In Part II you will read some of those sorrowful facts.