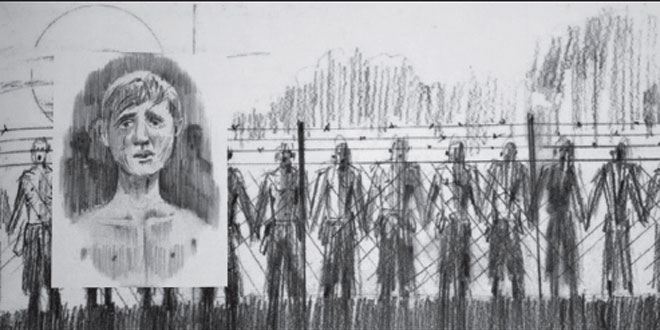 “For over 70 years, a little boy inside me has been nagging me to write this. I hope he’s happy now.”

Gene Mandarino was 12 years old when World War II came to an end. Growing up, his was the only Italian family in a German immigrant-filled neighborhood just outside of Benton Harbor, MI. He grew up with the children of these immigrants, playing in the baseball fields and trying their first cigarettes together. They were friends, neighbors and confidantes, but the war changed many things for Mandarino and his pals. In his book, “The Home Front,” he describes, through the eyes of a child, how innocence was lost, memories were made and hope held out for the soldiers on the battlefield.

Kritts Field was the stage for many of Mandarino’s fondest memories. He played baseball there with the older boys who became his mentors. They taught him much about becoming a man. During one particular game prior to the United States’ entry into WWII, a screaming fight ensued where he was called a “dago” and responded by calling the other boy 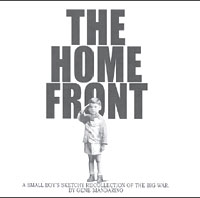 Eric Wagner, one of the older teenage boys stepped forward and whispered to Gene, “I’m a kraut head too… If I ever hear you call someone a kraut head again you know what I’ll do?” Gene stood paralyzed with fear. “I’ll tell your mother!” Eric yelled. From that point on, there would be no name calling based on race. There also would be no more baseball. For soon after, many of the boys like Eric became soldiers.

They were German boys sent to war to kill their own. “Germans would be fighting Germans,” a young Gene quickly realized. As young soldiers left the States for the battlefields in Europe or to fight the Japanese, “the battle lines on the home front were unclear.” Neighbors began to distrust each other, especially when it came to misunderstanding the culture of Japanese-Americans. “Many were impounded and held until the war ended. At age 11, there was no way to understand the mind boggling politics of it all.”

Soon the war was present in Gene’s home. His older sister, Theresa, married her love Jack, who she quickly had a baby with before he was shipped off 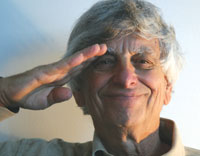 Mandarino mimics a photo of himself as a young boy which is seen on the cover of his book.

to war. Months of not hearing from him had her constantly worried. She passed out when a letter came from Western Union. What would be the fate of her husband?

Then the war came to Gene’s backyard. “Last night’s ‘News Palladium’ announced that about a thousand prisoners were heading to the Benton Harbor Naval Armory! I could barely swallow my coffee…that’s only a block away!”

Gene and his young friends immediately headed to the Armory where an entire city block had been cordoned off by barbed wire. As they approached, they realized the evil German soldiers they had pictured weren’t even men. “They were small and scrawny boys! Some were barely pubescent! Our age!…What maniac would send these kids into battle? It was more than my stomach could handle.” The neighborhood watched as frightened German children sang behind barbed wires, tears streaming down their cheeks.

The next day, the local grocery store was empty of candy bars and chewing gum. All had been bought and flung over the barbed wire for the “enemy.” American soldiers attempted to block these efforts, which was confusing for young Gene.

“I often wonder about all this. Who were the villains in 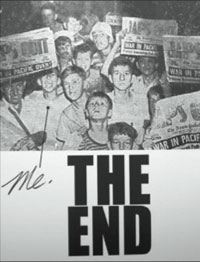 As a young paperboy, Gene delivered news of the end of WWII. The fighting and his story came to an end.

this war? Were they the 15-year-old Germans that cried themselves to sleep on the baseball court of the Naval Armory? Or were they the American boys trained to kill at the drop of a paper note? And who are the victors? Maybe nobody really won this war. One thing is sure. We were all victims.”

Food was rationed, mothers went to work, the poor became poorer and children sent to war came back as men with tortured memories or never came home at all. Even from the viewpoint of a child, the world had forever changed. “The Home Front,” with more than 100 original sketches created by Mandarino, not only tells his story but offers vivid recollections through his artwork. It is a touching and memorable read for any generation.

“The Home Front” will be available for purchase and signing by Mandarino at the Goodland Art Alliance’s Arts and Crafts Fair on Sunday, Jan. 26, from 10 AM-4 PM. Located at MarGood Harbor Park, 321 Pear Tree Ave., Goodland, the fair will host many other local artists featuring one-of-a-kind works.

“The Home Front” is also available directly from the author at gmandarino@sbcglobal.net for $25, which includes shipping to US destinations.