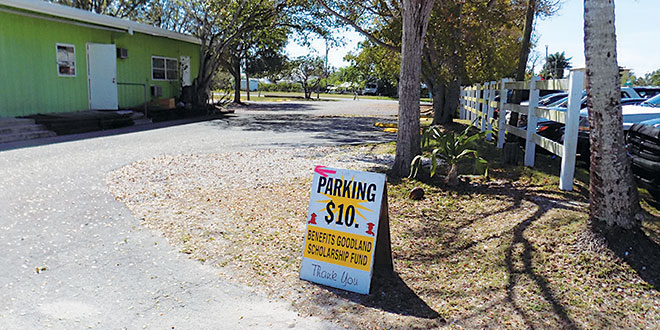 Most visitors to Goodland don’t exactly know what to make of us. Most would agree with the aphorism that Goodland is “a drinking village, with a fishing problem.” We have our share of that, I guess. It may be time for a new adage. Something like “Goodland takes care of its own.”

Since the mid 1980’s, the Goodland Scholarship Fund has been raising money and dispensing scholarships to Goodland kids who want more than a high school education. It was founded by Betty Bruno as Village Productions. From all that I have heard, Bruno is the godmother of community service in Goodland. She was interested in higher education for Goodland’s youngsters, and started doing something about it. In 1998, Ameila Bozicnik and Judy Wittwer kind of took over the operation. They both had kids going into college and were aware of the need for some sort of financial aid for Goodland’s high school graduates. They sold baked goods, held flea markets and did anything they could to raise money. It was a seat of the pants operation and had varying degrees of success.

Happily for Goodland students, Amelia Bozicnik (known here as Amy) is married to Ray Bozicnik, who, along with his sister, Nikki Bauer, own the Little Bar Restaurant in Goodland. Amy and Ray had a higher vision for the scholarship efforts. In 2003, this endeavor was incorporated as the Goodland Scholarship Fund, Inc.(“GSF”). The listed purpose was “to raise money for deserving children of Goodland for their college education.” This definition has been expanded to include any accredited post-high school, undergraduate education. GSF scholarships have also been awarded for vocational schools, trade schools, cooking schools, and marine mechanic schools.

Amy is listed as president 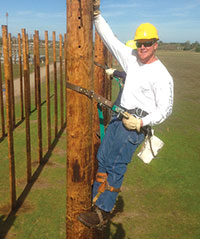 and Ray as vice president. The idea was to give the GSF a base of operations and a way to raise money each year. Little Bar owners Ray Bozicnik, and Nikki Bauer agreed to allow Amy to use the Little Bar office for administration of the GSF. They also agreed to allow the GSF to use the Little Bar’s largest parking lot on Sundays to raise money for GSF. This decision may well have cost the Little Bar some revenue, as some of its patrons would, as a result, be crowded out of this lot. The money raised on this parking lot has been the main source of income for the GSF.

During the busy winter season, from mid-January to the first weekend in April, visitors pour into Goodland to revel at Stan’s, eat some great food, and get a look at Goodland. This activity peaks on Sundays. There is hardly room to park all of the cars. Amy (and the author) can be seen every Sunday afternoon, greeting visitors and giving them the chance to get a great parking space and contribute $10 to the GSF. Believe it or not, most of these seek us out the next time they come. The Little Bar lot is paved and delineated with yellow lines. It can accommodate about 40 cars. Across the street from this lot is a large vacant lot owned by Greg and Jack Bello. Next to this lot is an even larger vacant lot owned by Ray and Amy Bozicnik. Both of these lots have been donated to accommodate the overflow from the Little Bar lot. All of the money collected is ultimately disbursed to eligible high school graduates.

Scholarships are normally given out in $500 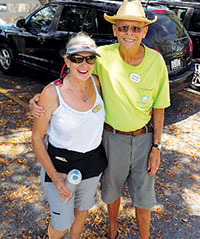 Barry and Amy ready to raise some money.

increments for each semester or trimester of a student’s attendance at post-high school education. The increment may occasionally be for less, depending on the amount of money in the fund. The student must either reside here or have a compelling and palpable connection with Goodland. The student must, in writing, request scholarship money and provide proof that he or she is registered and is actually attending an eligible school. Amy believes that since 1998, about $30,000 has been distributed in this manner to at least 20 children. She estimates that there are currently 25 to 30 kids in Goodland who have not yet graduated from high school. Currently, there are three participating students. They are attending the University of Florida, Florida Gulf Coast University, and Southwestern Florida State College. Other participating schools have been Florida State University, Florida Atlantic University, Northern Arizona University, Prescott (AZ) College, Cornell University, College of Charleston, Lorenzo Walker Institute of Technology, and the Minnesota State Community and Technical College.

This year, perhaps our best year yet, a total of $8,415 was raised from parking cars. However, not all scholarship money comes from parking cars. It doesn’t hurt that Amy is arguably the most well-known and best liked person in Goodland. People will come up to her and hand her cash. They will send her checks. Most of these people know kids who have benefitted from her long hours and hard work at the GSF. A couple of examples are typical of the many GSF has helped. 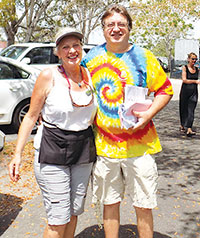 Tufts University (Somerville, MA). GSF assistance is not available for graduate degrees, but it helped Nina as an undergraduate. Today Nina is the Assistant Curator of the Henry Art Gallery at the University of Washington, Seattle, WA. The nationally known Henry has a permanent collection of 20,500 objects and features exhibitions that bring important works of art from around the world to Seattle. It is considered the most significant art museum in the Northwest.

Karl Green, another GSF recipient, also grew up in Goodland. I asked his mother, Carol Green, to comment for this article. I can do no better than to quote her reply:

“Karl attended Lorenzo Walker Institute of Technology in Naples for Marine Mechanics and graduated with a diploma. After graduating he accepted a job with Sea Tow Marco Island. He obtained a 50-ton Masters Captain license with commercial assistance towing endorsement. He was with Sea Tow for three years, and then decided to go back to college. He attended Minnesota State Community and Technical College, enrolled in the electrical line worker program. After graduating, he took a job with Lake States Construction, where he is currently employed as an apprentice lineman. Karl received [GSF] scholarships to help defray the cost incurred with both college degrees. Our daughter Rebecca has also benefited from the Goodland Scholarship program. She is currently in her second year of college at Florida Southwestern State College. She is enrolled in the Radiologic Technology Program.”

Kind of makes a fellow wish he had grown up in Goodland.